I've allowed myself to hope that Reed Blankenship would A) Stick on Philly's roster, and B) Turn out to be pretty good. Indications so far are that he's at least going to be a Chris Maragos-type special teams contributor (aka really good run around and hit people in the face player), but he's also gotten some 1st team snaps at safety. So I started thinking about what we might get if we see Blankenship getting significant defensive snaps this year, even in rotation (which is the most realistic scenario).

Here's why I like Blankenship: shortly-put, he's a smaller school dude who balled out two years back, but dropped off some his last year in college. EJ Snyder said he'd probably have been a 4th rounder if he came out last year. As a UDFA, who wouldn't take a shot at a guy who's a 4th round talent effectively for free?

So, what does he do well? Blankenship is a quintessential box safety. He's something of a throwback guy as a hard hitter who flies around and plays hard. According to the Bootleg Football guys, he can do some 2-deep zone work, which we know Gannon will like, and even if he's not a single-high centerfielder, he can rotate into the box or maybe the nickel if he's playing a hook or a flat zone. He'll be a plausible blitzer with a bad attitude coming downhill. Effectively, the Eagles signed a guy who would be a 4th rounder last year, but his skill set sounds like he'd have gone quite a bit higher a decade or two ago, when guys like Roy Williams roamed the league and Telvin Smith never would've been a linebacker at the NFL level.

So who's the comp? Among Eagles legacy guys, I choose Michael Lewis. This started as a stylistic comparison to the 2002 2nd round draft pick out of Colorado, but check out the RAS and testing numbers: 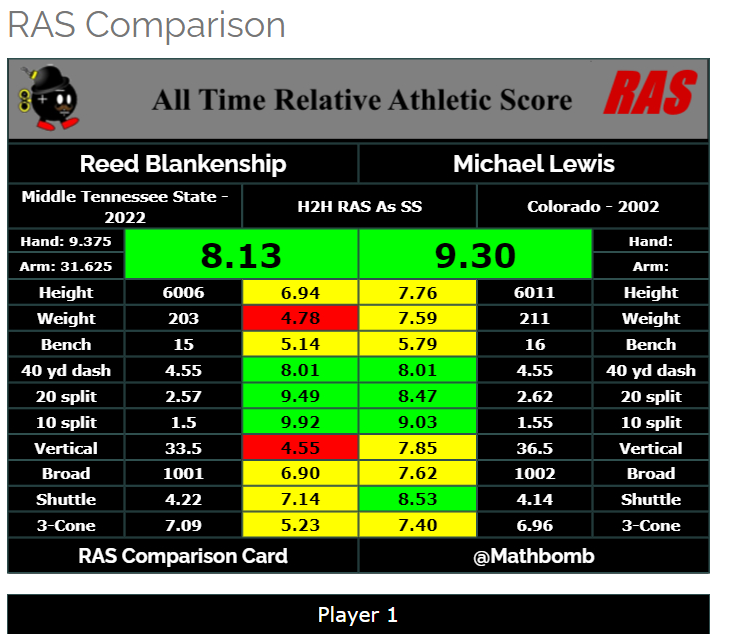 A pair of Eagles box safeties across the ages.

The Raw Athletic Score itself shows more than a full point of difference between the two players, but, as with all averages and aggregates, this score flattens a pretty similar picture. The most significant differences between the two players are that Blankenship is smaller (203 pounds vs. Lewis' 211) and had a less-impressive vertical jump (33.5 inches vs. 36.5). We can also see that Lewis scored better ratings in the 3-cone (7.4 to Blankenship's 5.23) and the shuttle (8.53 vs. 7.14). However, when we look at the actual testing numbers, we get a fuller, closer, and more interesting picture.

The two players are very close in height, almost identical in bench/upper body strength, ran identical 40 times, and 1-inch difference in the broad jump. The raw numbers for the 3-cone and shuttle are not far enough off to be super concerning either, with Blankenship coming in .08 and .07 behind Lewis respectively. Meanwhile, in the 40, Blankenship showed more explosive getoff with his 10- (1.5 vs. Lewis' 1.55 seconds) and 20-yard (2.57 seconds vs. Lewis' 2.62) splits, which says that while Lewis changed direction a little more fluidly, Blankenship is more explosive. Blankenship's score may also have been affected by his length (31.6 inch arms), which wasn't super-duper impressive.

All-in-all, though, the two compare pretty favorably from an athletic ability standpoint. And, as a safety taken 20 years earlier in the draft, Lewis went in Round 2 as a guy who was mostly going to play in the box and around the line of scrimmage. He and Blankenship share their affinity for the run game, hard hits, and playing downhill with a head full of steam. Now, there will be some of us who remember Lewis fondly for his first team all pro selection in 2004 and the ways he played as an enforcer in the box for Andy Reid's perpetual playoff contenders. There will also be those of us who mostly remember Lewis as one of the biggest liabilities in coverage not named Roy Williams during that era. Still, Lewis played for 11 years in the league, and he had a 4 year run for Philly where he was good for 80-100 tackles and 2ish picks a year. Defense has changed significantly, but if we got anything close to 3-4 good starter years out of Blankenship, a UDFA signing, I'd be absolutely thrilled and blown away. Let me know what y'all think!