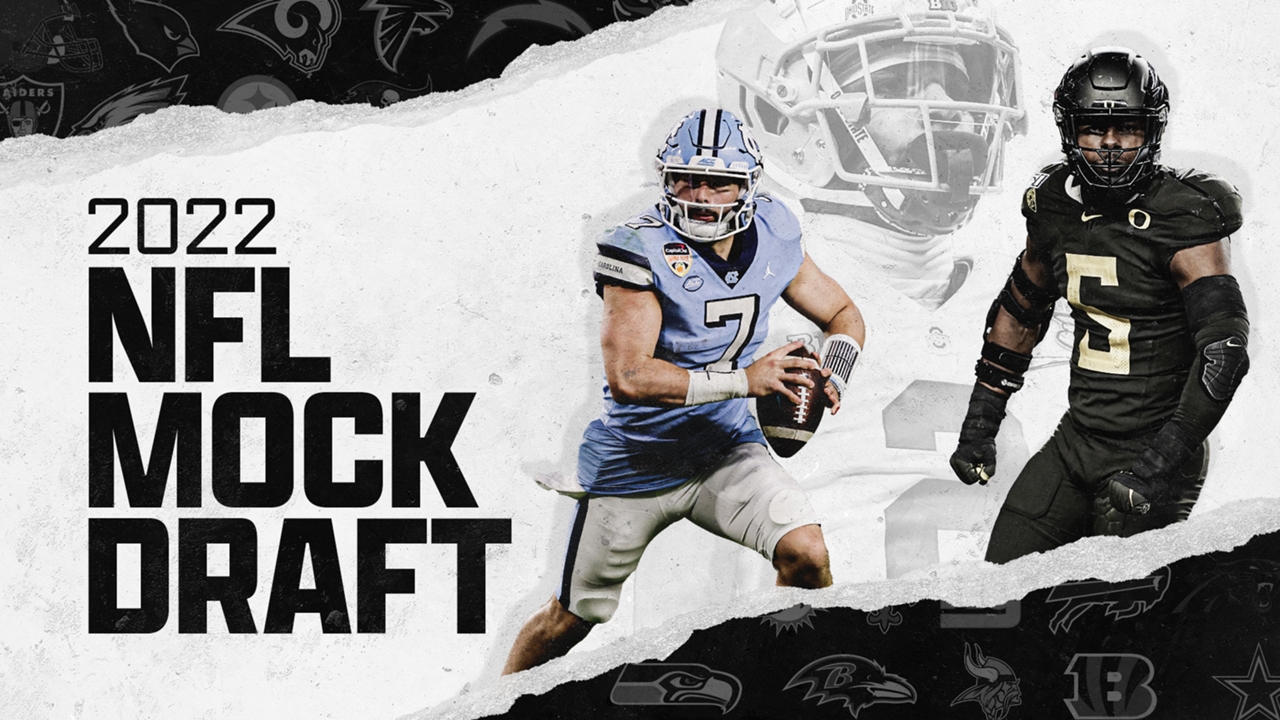 Yeah it's way too early for this, I know. But I figured we could all get acquainted with some players, since we have 5 picks in the first 3 rounds of next year's draft. I used the NFL prospect database and acted on the belief that we're building around Hurts to compete for a title. Let's begin: 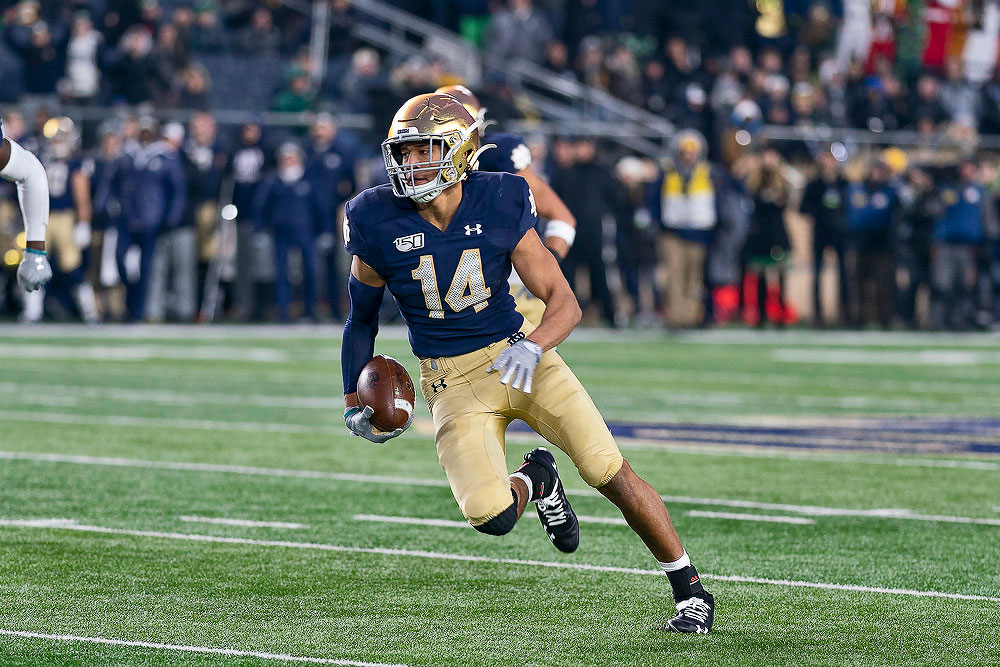 With Derek Stingley and 2 QBs off the board, Kyle Hamilton was ripe for the taking. Hamilton is the 2nd best DB prospect in the draft, and the best overall safety prospect. Hamilton has rare LB-esque size for the safety position, but plays with the quickness and instincts of a natural DB. He played in multiple alignments for the Fighting Irish in 2020, showcasing the ability to play single-high, in the slot, as a box safety, and even in rushing the passer. Hamilton is also an excellent tackler, with a division's best tackle %. he also makes plays on the ball, notching 13 PBUs and 5 INTs over 2 seasons. Hamilton projects to be a starter at either safety position at the next level, giving the Eagles flexibility in that area, as both Anthony Harris and Rodney McLeod will be free agents. 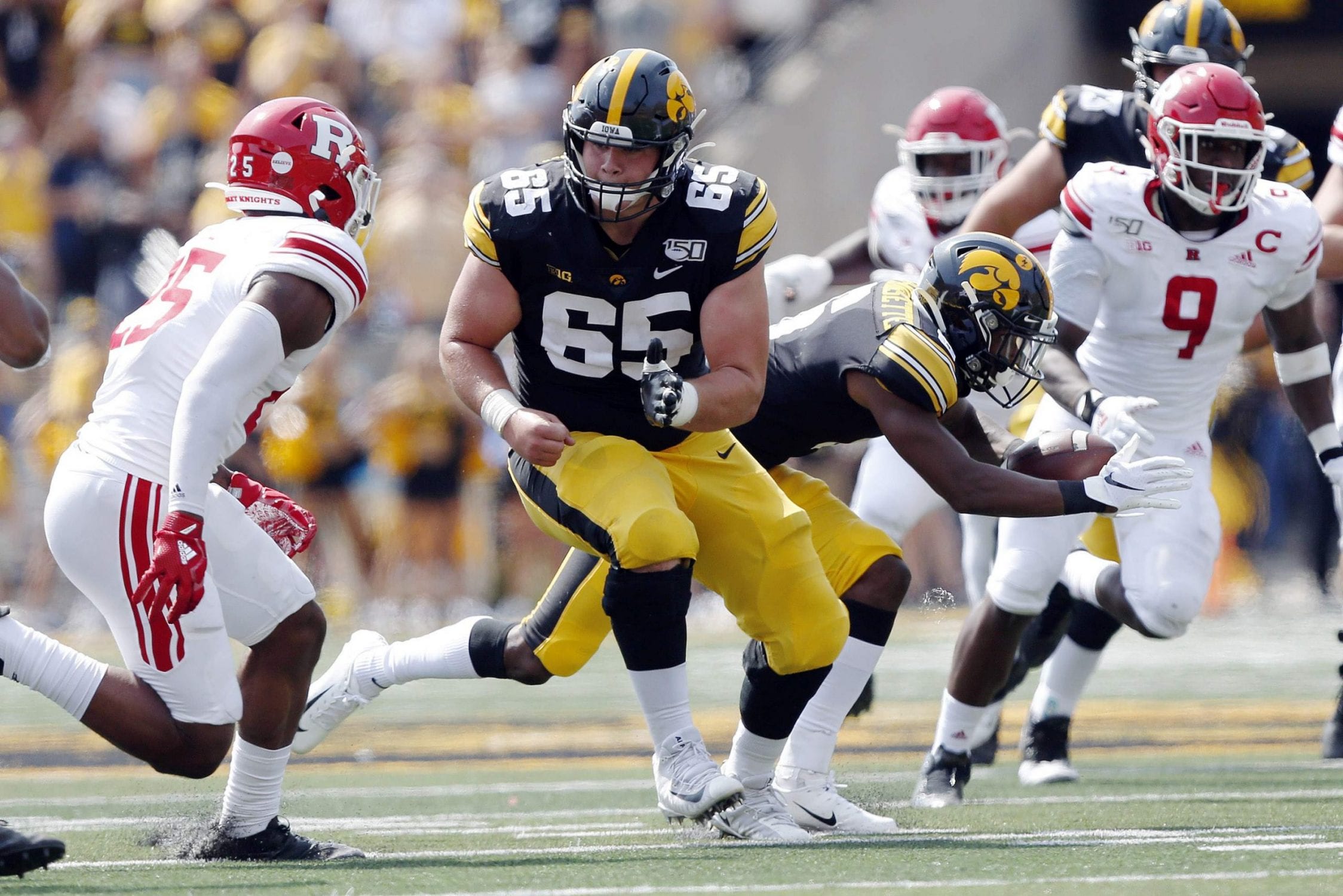 Yes, I know the Eagles just took Landon Dickerson in the 2nd round this past draft, but when the opportunity presents itself, you don't pass on an elite OL prospect. Tyler Lindbaum is arguably the best interior o-line prospect in the draft, projected to be an immediate high-end starting center in the NFL. With Kelce soon to retire, and Brooks and Lane on the wrong side of 30, it's smart to keep a reserve of young talented o-line prospects. Lindbaum already has an elite understanding of the nuances of center play, he keeps a low center of gravity, utilizes good footwork to sustain blocks, and has top level run blocking skills, with the speed to keep up. 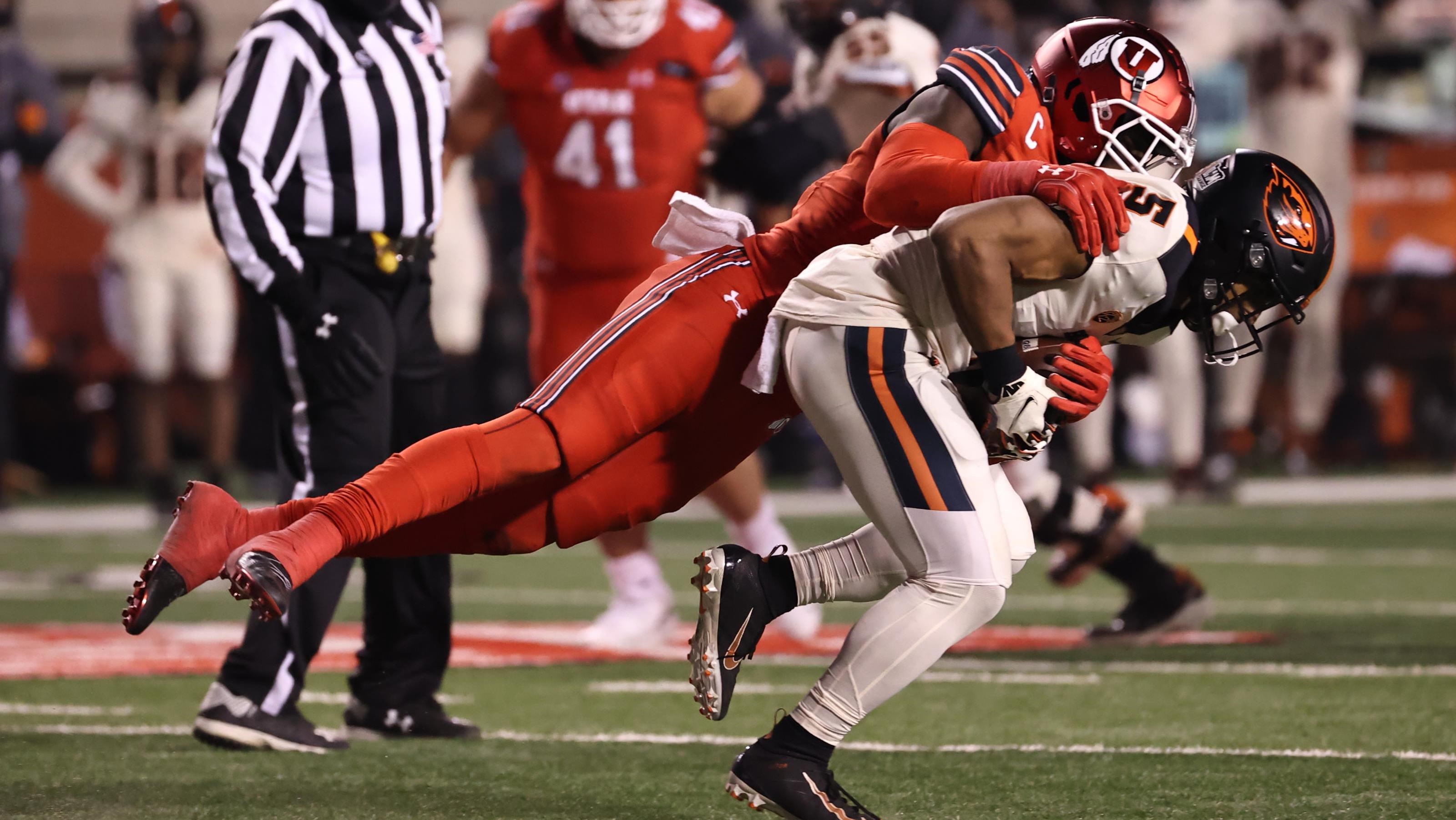 Height: 6'2" | Weight: 228 lbs | Projected 40 Yard Dash: 4.67 secs
Taking a LB in the 2nd round? Howie would NEVER. Get over it, I'm doing it. While I think Eric Wilson was a sneaky pickup in free agency, he's only signed for 1 season. I also think Singleton is an underrated run defender, but the Eagles haven't had a do-it-all MIKE capable LB since Jordan Hicks. Devin Lloyd presents that kind of upside, as a top 3 LB prospect in the draft. Lloyd possesses elite athletic traits, with superior sideline-to-sideline speed, and the ability to cover RBs out of the backfield. He's also no slouch when it comes to rushing the passer, having notched 157 tackles, 9.5 sacks, and 2 forced fumbles over 3 seasons with the Utes.
NFL Comparison: Darius Leonard (IND) 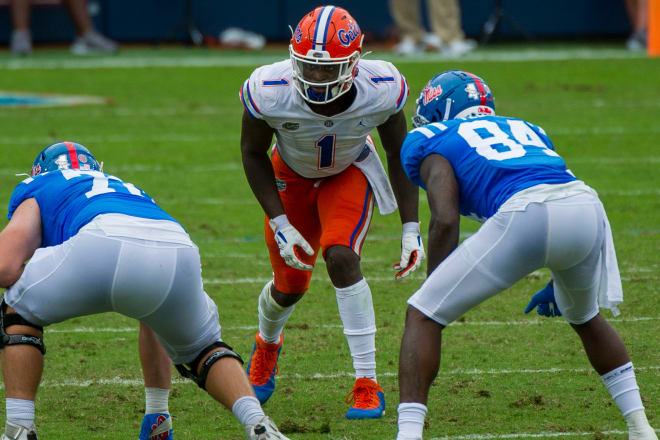 Height: 6'4" | Weight: 250 lbs | Projected 40 Yard Dash: 4.69 secs
The Eagles are in need of some youth at the pass rushing position, with Derek Barnett exercising his 5th year option, and Brandon Graham at the ripe of 33. Brenton Cox is a high upside, former 5 star recruit, with the ability to play both with his hands in the ground, and standing upright. He's also displayed competency in dropping back into coverage when necessary. Cox possesses an impressive first step, with an NFL-ready arsenal of pass rush maneuvers, and solid explosion at the line of scrimmage. Projects to be a rotational edge rusher, with positional flexibility, that could work into a starting role.
NFL Comparison: Brian Burns (CAR) 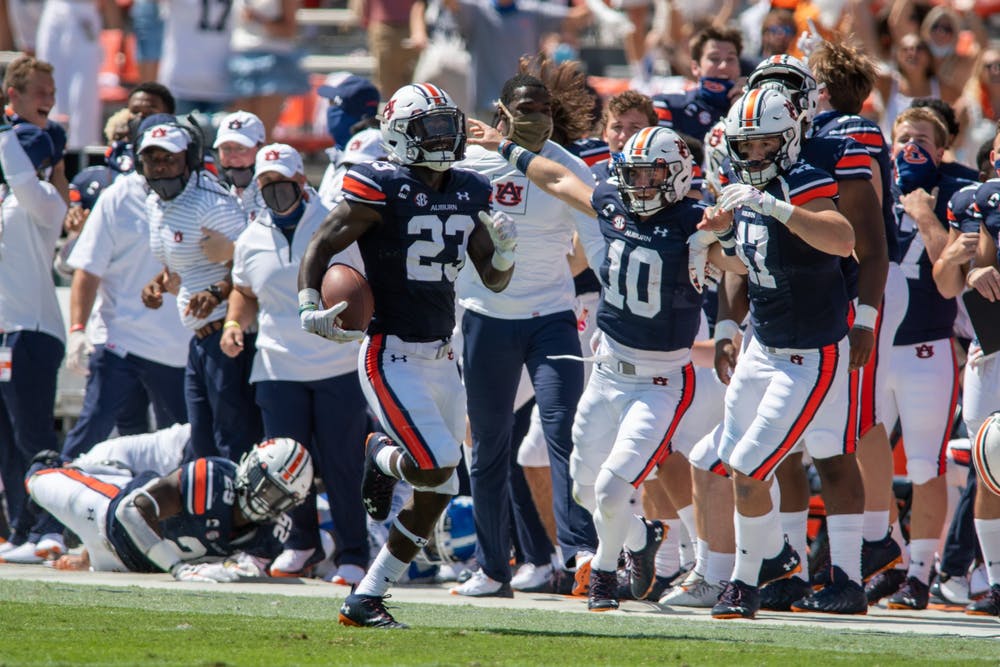 Height: 5'11" | Weight: 190 lbs | Projected 40 Yard Dash: 4.45 secs
Along with WR and LB, CB has been a sneaky need for the Eagles as well. Darius Slay holds down the CB1 position as he looks to bounce back from a mediocre 2020 season. Which i expect him to do with more press man looks, under new defensive coordinator Jonathan Gannon. besides Slay, Steven Nelson is signed to a 1 year contract, and Avonte Maddox is in the last year of his rookie deal. Roger McCreary is a slightly undersized cover corner with excellent cover skills to run the route and prevent separation. He is fast, athletic, and instinctive. He has 70 tackles, 18 PBUs, and 4 INTs to his name over 2 seasons as a starter at Auburn. McCreary held Jets 2nd rd pick Elijah Moore to 5 receptions for 16 yards during their meetup in 2020.
NFL Comparison: Kendall Fuller (WFT) 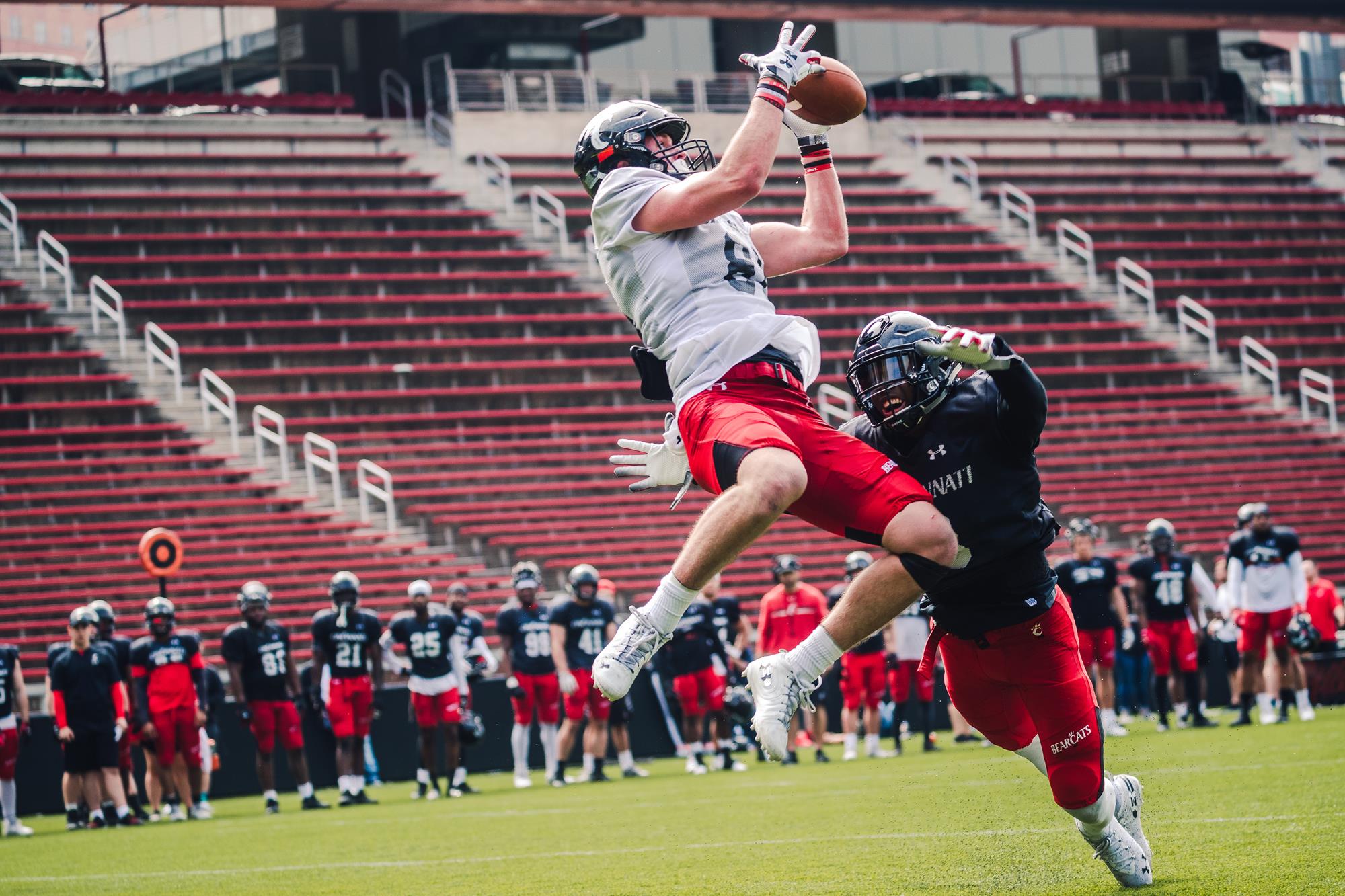 Height: 6'6" | Weight: 245 lbs | Projected 40 Yard Dash: 4.70 secs
Trade rumors be damned, Zach Ertz is still here, at least for the 2021 season. After his departure, as the Eagles are sure not to resign him, the TE room will be occupied by Dallas Goedert and 2021 training camp standout Tyree Jackson (and maybe Jack Stoll?) That doesn't leave much room for excitement, so in comes Josh Whyle. Whyle is an absolute unit in the redzone, hauling in 6 TDs in 2020, as he presents a size mismatch against corners. He's flashed consistent receiving and route-running, but his real upside is as a blocker, which he's been utilized as in a variety of looks for the Bearcats offense.
NFL Comparison: Tyler Higbee (LAR) 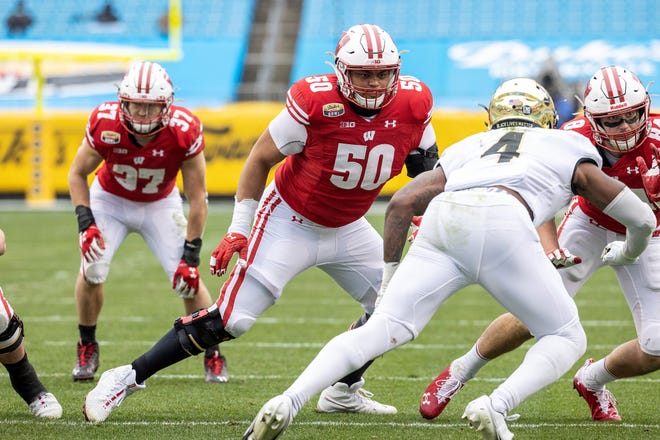 Height: 6'6" | Weight: 311 lbs | Projected 40 Yard Dash: 5.39
Depth on the offensive line is important. Especially after 2020, where the Eagles set a new NFL record with most OL combinations in a single season. With questions about Andre Dillard's future in Philadelphia, and the only other tackle on the roster being 2018 UDFA Brett Toth, the position could use some more bodies. Logan Brown has been a consistent blocker on the left side for the Badgers offense. He presents decent lateral quickness to counter edge rushers, as well as a strong anchor against power rushers, but doesn't have the burst to carry blocks to the second level. Projects as a backup utility swing tackle in the NFL.
NFL Comparison: Rashod Hill (MIN) 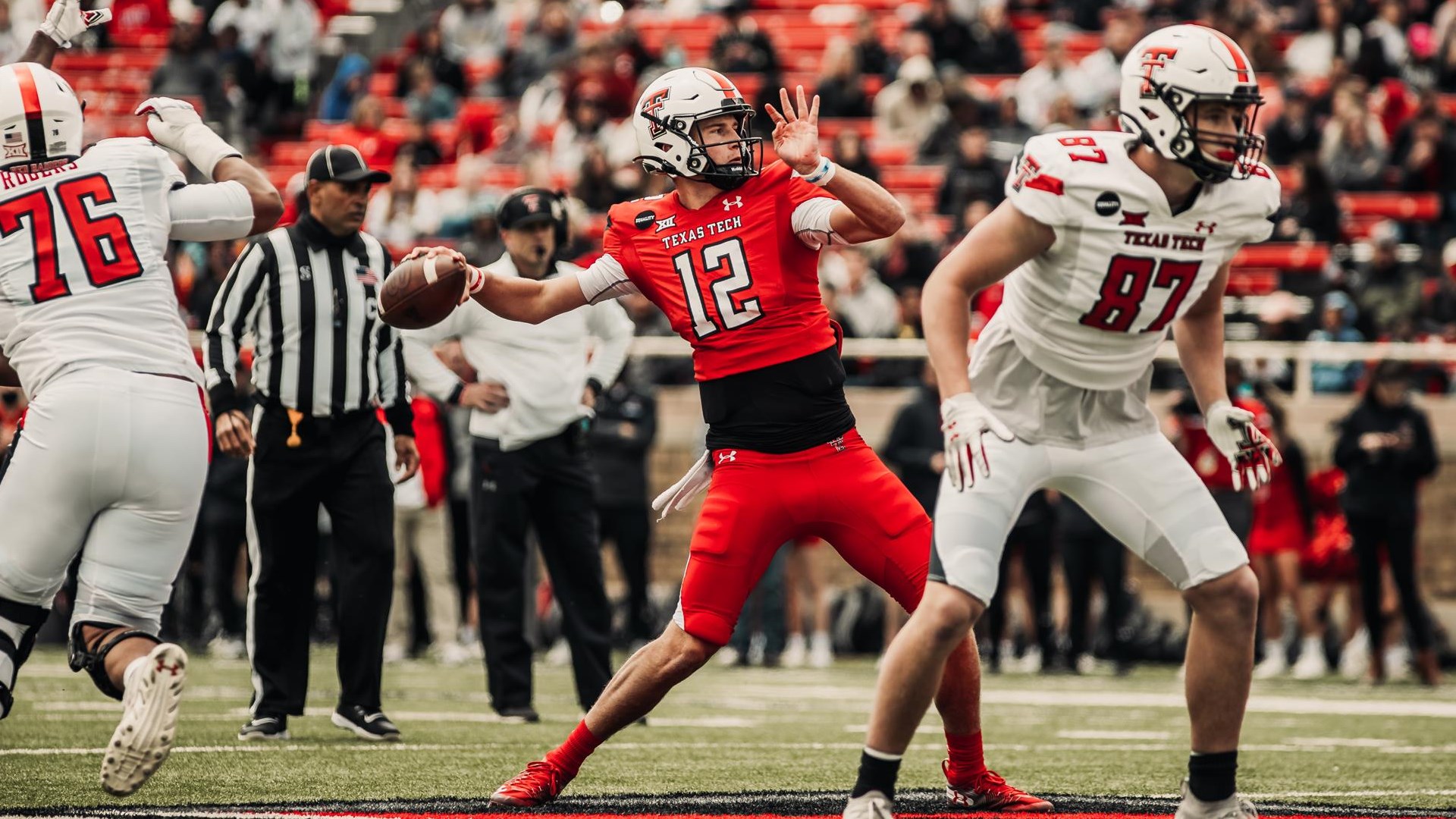 Height: 6'5" | Weight: 221 lbs | Projected 40 Yard Dash: 4.69
Once considered a possible 1st round pick, having led Oregon to it's 2nd consecutive PAC12 championship, Tyler Shough has dropped significantly on draft boards after he initiated a transfer to Texas Tech. Shough will have to prove he can build on a solid 2020 season with more consistency as a passer. He possesses a good skill set with natural arm strength and some athleticism to leave the pocket. Shough would be a perfect high upside developmental QB in a west coast offense. He could be QB3 behind Gardner Minshew after Flacco leaves or retires.
NFL Comparison: Trevor Semien (NOR) 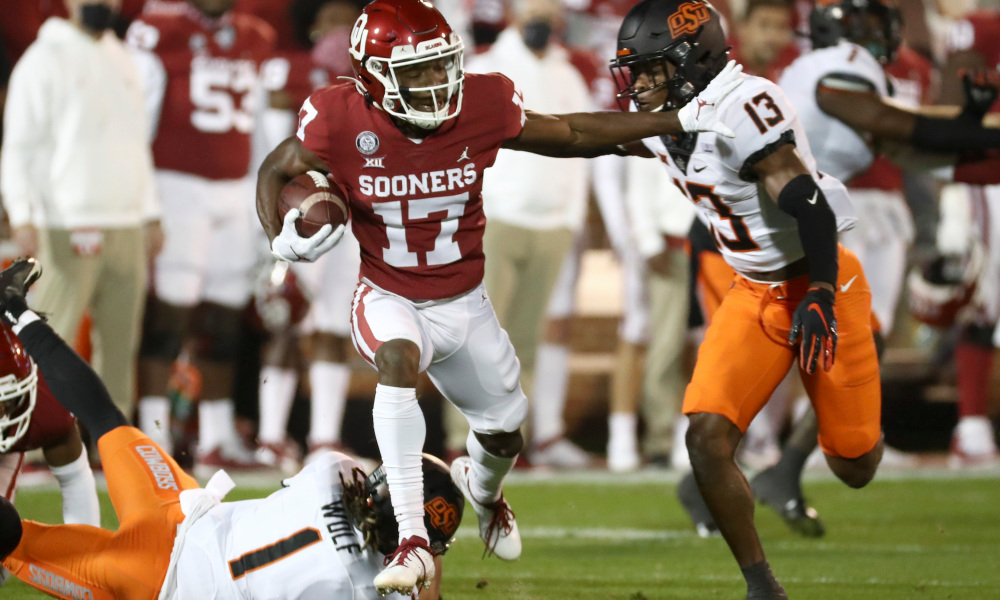 Height: 6'1" | Weight: 198 lbs | Projected 40 Yard Dash: 4.55
Michael Woods II has recorded a relatively solid career so far, with 1248 yards and 10 TDs to his name over 3 seasons with the Arkansas Razorbacks. Now he looks to break out in a big way, catching passes from possible #1 overall pick Spencer Rattler, but he'll have to find a way to cement himself as a go-to target over other receivers such as Marvin Mims and Mario Williams. Woods II has displayed decent route running and catch ability at the point of attack, but lacks elite athletic traits and deep speed. He projects as a rotational receiver at the next level.
NFL Comparison: Rashard Higgins (CLE)