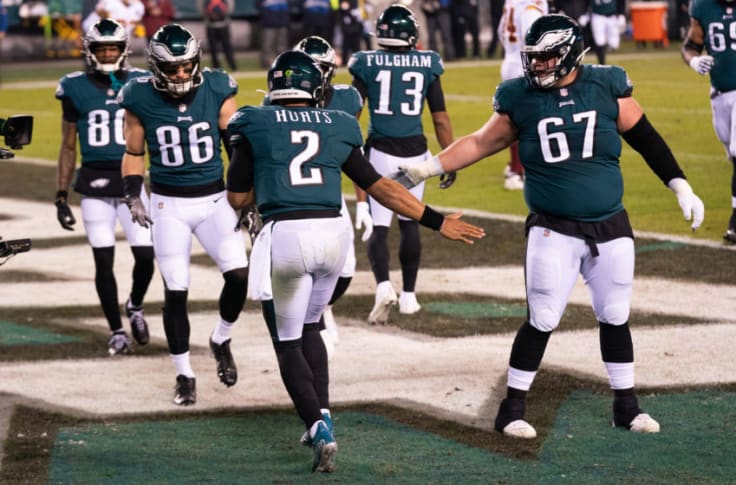 8 games down, 9 to go. Expectations weren't high to begin the year anyway, rookie quarterback, rookie head coach, so on and so forth. Let's talk about how the offense has done so far, after a blowout against the winless Lions.

So far, there hasn't been much to like about what's come out of the Eagles signal-caller position so far this season. With optimism surrounding Jalen Hurts in his second year, and a new coaching staff to help with his development on the field, the results so far have been...underwhelming. Hurts occasionally will make those fan favorite wow plays happen with his legs, and is responsible for a large portion of the Eagles rushing attack. When he's been asked to dish the ball from the pocket, he's struggled. Much of the issues that plagued him in 2020, and made him nothing more than a day 2 pick in the draft still malign Hurts. He has sloppy footwork, bad mechanics, can't read defenses or throw over the middle of the field, and often bails from the pocket early. There has been inconsistency on the Eagles offensive line, but he has to trust his linemen, step up in the pocket, and make the correct read. Inaccuracy on touch passes and deep balls have led to a lot of incompletions, and underthrown passes as well. There's still hope for Hurts, who has a high ceiling, but he'll need more time, which he may never get in a highly competitive league. If he continues to struggle, the calls for Minshew in Philly will get louder.

The grade surrounding the runningback position has less to do with the performance and ability of the Eagles runners, and more to do with Nick Sirianni's gamecalling prior to the most recent Lions game, where the run had been abandoned entirely for weeks on end. Miles Sanders is a talented player, who was tied with Ezekiel Elliott for 10th among all runningbacks this year with a 4.8 rushing average before his injury in the first half of the Raiders game. As showed by on-field performance, the Eagles have a good stable of backs who can control the flow of the game and punish defensive lines if used correctly.

Another grade that is mostly dictated by lack of performance from another position, rather than the inherent merit of the position itself. While he's not having an offensive rookie of the year type season, DeVonta Smith has cleary demonstrated he was the right pick for the Eagles, despite concerns about his size at the next level. He's shown he has elite route-running and hands, and already has a good rapport with his other offensive teammates. Reagor has not developed as hoped in his second year either, but there's still room for optimism. He's clearly talented with the ball in his hands, as evidenced by him leading the team in yards after catch. Quez Watkins has also developed into a solid 3rd option. Hurts' inconsistencies in the passing game has led to a lack of filling up the stat sheet for the Eagles, but the promise is there.

Before trading him to the Arizona Cardinals, Zach Ertz was playing decently well for the Eagles. Now it's entirely in the hands of Dallas Goedert, who has stepped up and answered the call, with 9 catches and 142 yards over the past 2 games. Goedert currently leads all NFL tight ends in yards per reception, and is 10th in receiving yards. Undrafted free agent Jack Stoll has done well as the second option, notching his first big league reception this past week versus the Lions, and also has received good grades for his blocking. The Eagles do not have a 3rd tight end on their depth chart currently, but Tyree Jackson's practice window was opened recently, and the expectation is he will rejoin the team once healthy.

I decided to split the offensive line into two parts as there's much to note. To start, the development of Aussie giant teddy bear Jordan Mailata has been one of the few major homegrown successes of recent Eagles seasons. While not a star by any measure, Mailata has gone from 7th round pick with not a lick of American football in his resume, to above-average graded left tackle. He does experience the occasional misstep against faster edge rushers, but overall he's clearly cemented as a good offensive tackle in the NFL. On the other side of the line, Lane Johnson has played well when healthy. Not the dominant all-pro player he was in the past, at the age of 31, he has still graded out as a top 15 tackle. With both Mailata and Lane missing time, 2019 1st round pick Andre Dillard has had to step in at left tackle and has looked capable while doing so. The 4th tackle on the Eagles depth chart is UDFA Brett Toth, who played his first offensive snaps during garbage time in the Lions game.

To much of the dismay of Eagles fans everywhere, the interior portion of the offensive line is yet again, injured. Both starting guards Isaac Seumalo and Brandon Brooks are out for the season, which leaves only center Jason Kelce in the aftermath. However, through a mismatch of Jack Driscoll, Nate Herbig, Landon Dickerson, Sua Opeta, and Jack Anderson, the line has still held up relatively well. Jason Kelce is yet again, fantastic as the 2nd highest graded center in the NFL behind only Frank Ragnow. Jack Driscoll has a top 15 grade at guard, and while he struggled in earlier contests, Landon Dickerson has settled in and earned a top 10 grade among guards this past week. Looks like the commitment to maintaining quality depth across both lines has worked out well for Howie Roseman.