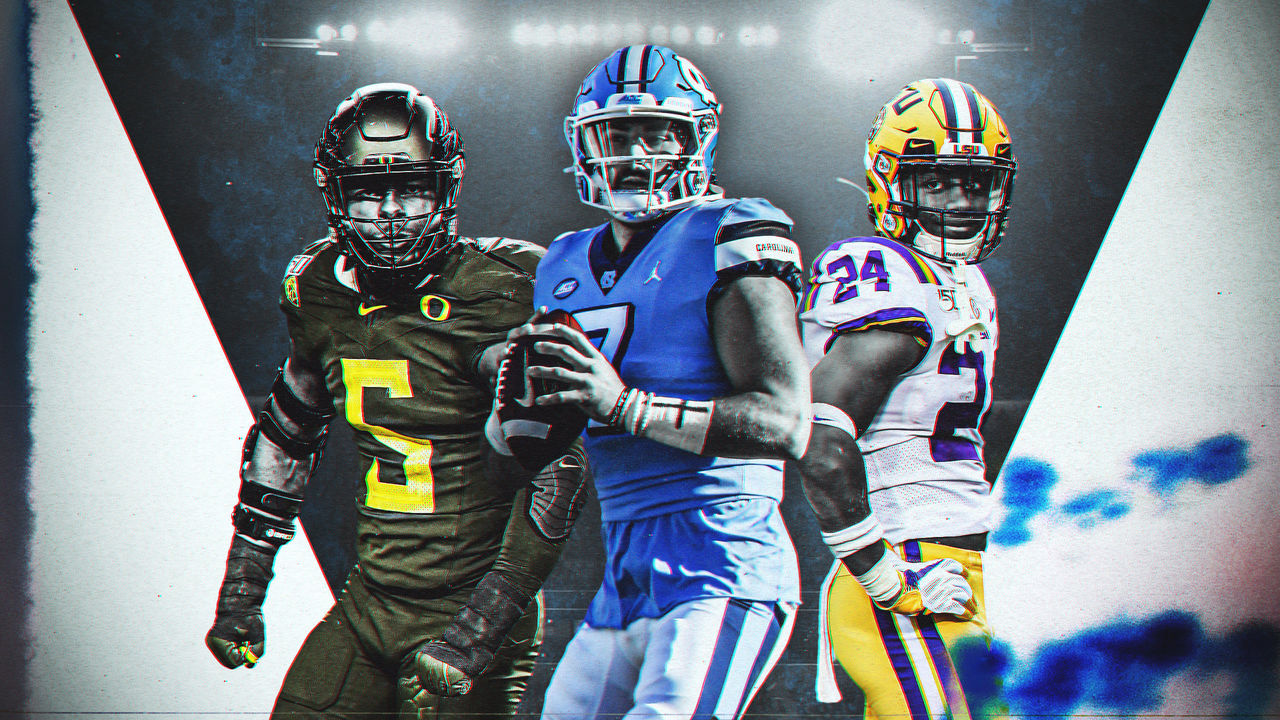 It's been awhile since we checked in, so let's go over what's happened. The Eagles are currently 2-4 just past the 1/3 mark of the season. Carson Wentz is playing well in a bad AFC South, so chances are, the Colts' 1st round pick is ours for the taking. Also, Miami sucks. Hurts hasn't looked like the answer thus far, but he hasn't looked like the (only) problem either. Lurie wants to build around Hurts, so that's what this mock draft is doing, let's get into it: 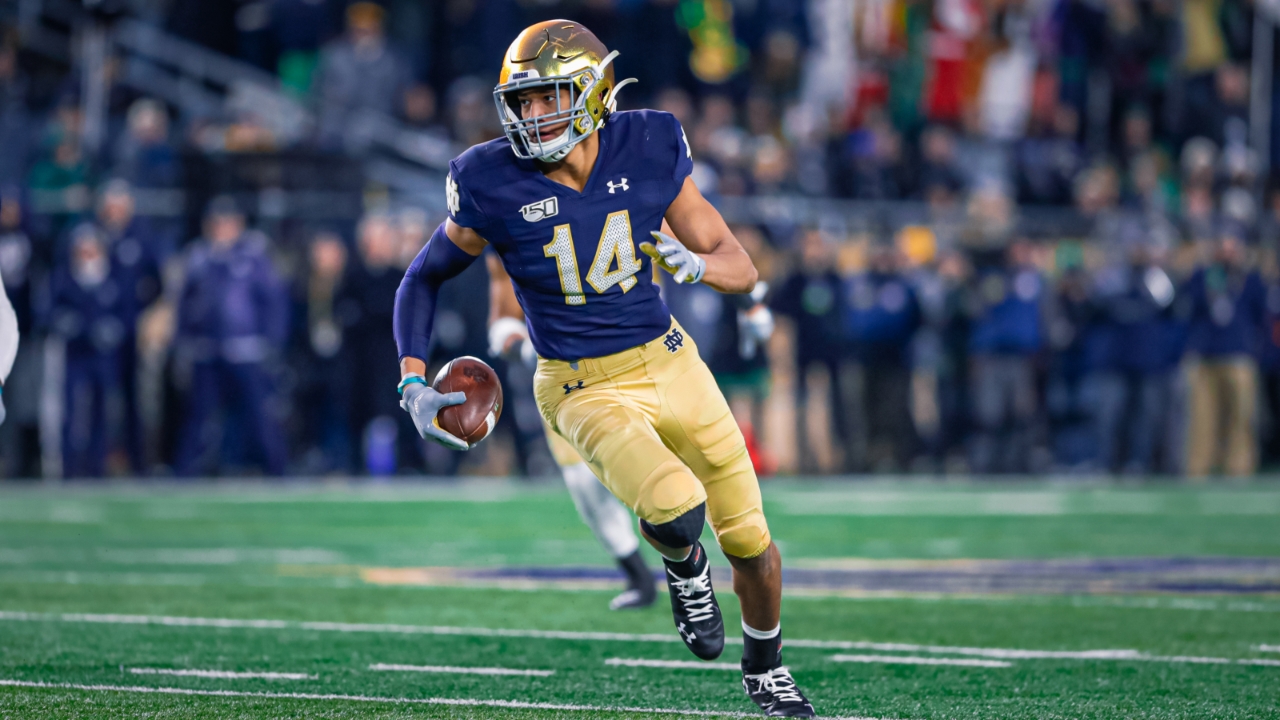 Kyle Hamilton is a unique player with a rare blend of linebacker size and cornerback speed. He's a fluid athlete, who is quick and smooth in his footwork. He plays a variety of positions across the Fighting Irish defense, and can be used to create mismatches. Outstanding range and lateral speed any spot on the field with a nose for the football. Has 8 career interceptions over 3 seasons, with 3 in 2021 so far. Hamilton is a can't-miss prospect, with an all-pro level ceiling at the NFL level. 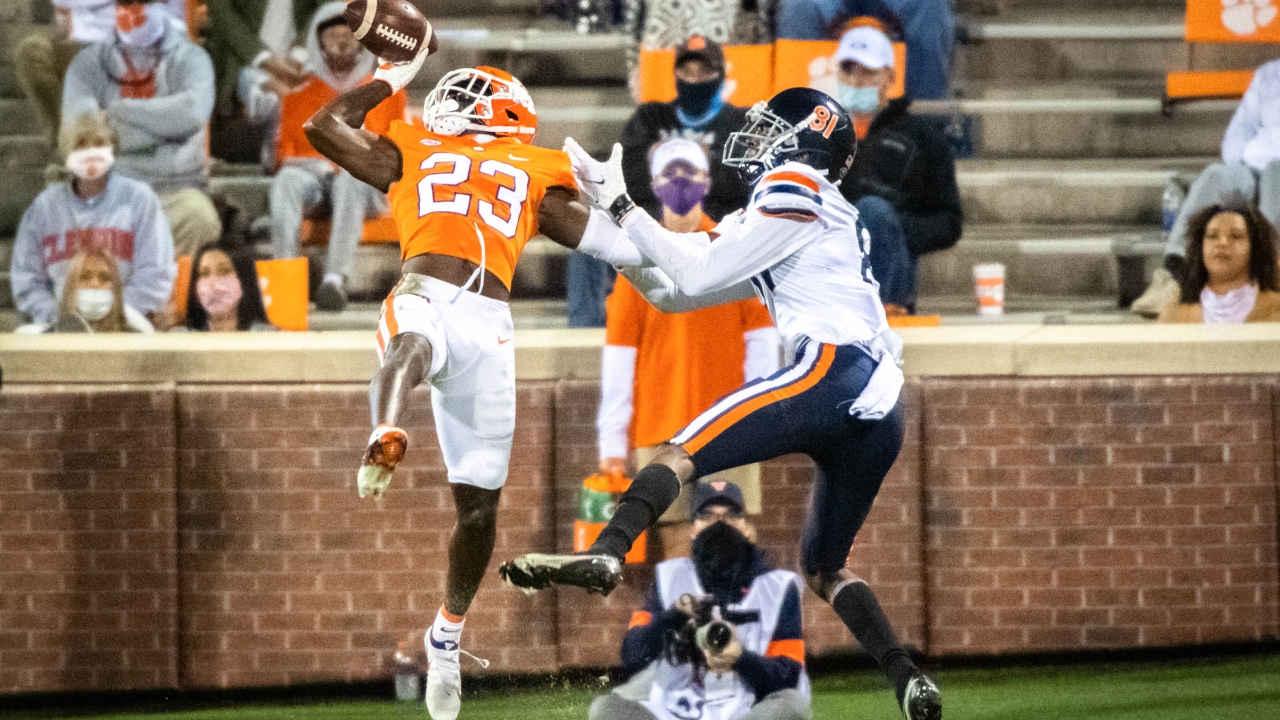 Elite athlete who plays an aggressive brand of football. Uses his natural speed to remain tight in coverage, and trigger downhill. Demonstrates outstanding ball skills, and maximizes his length to defend with precise timing. Tasked with mostly playing soft press and cover 3 zone in the Clemson defense, will need to expand his defensive schematic range at the next level. Projected to be an immediate starter on the perimeter, with a pro-bowl ceiling. 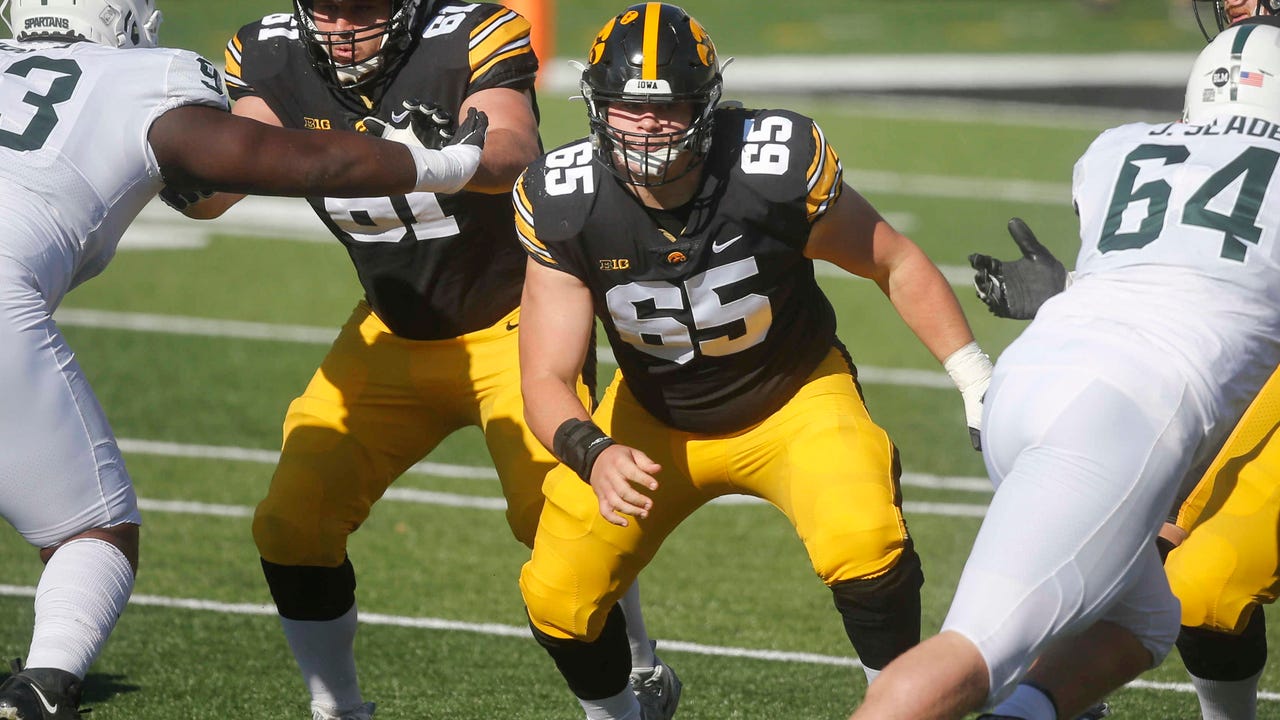 Tyler Lindbaum is the 3rd highest ranked OL prospect, and the best true center in the draft. Possesses the natural movement skills and functional athleticism to be a high-end starting interior offensive lineman in the NFL. Exhibits outstanding quickness in his punch and footwork, fluid mover to the second level in the run game, and a veteran tactician as a 3-year starter. Yes, the Eagles just drafted Landon Dickerson in the 2nd round this most recent draft, but 3 out of 5 starters on the offensive line are past the age of 32, and oft-injured. You have to keep drafting o-linemen, to maintain an elite one. 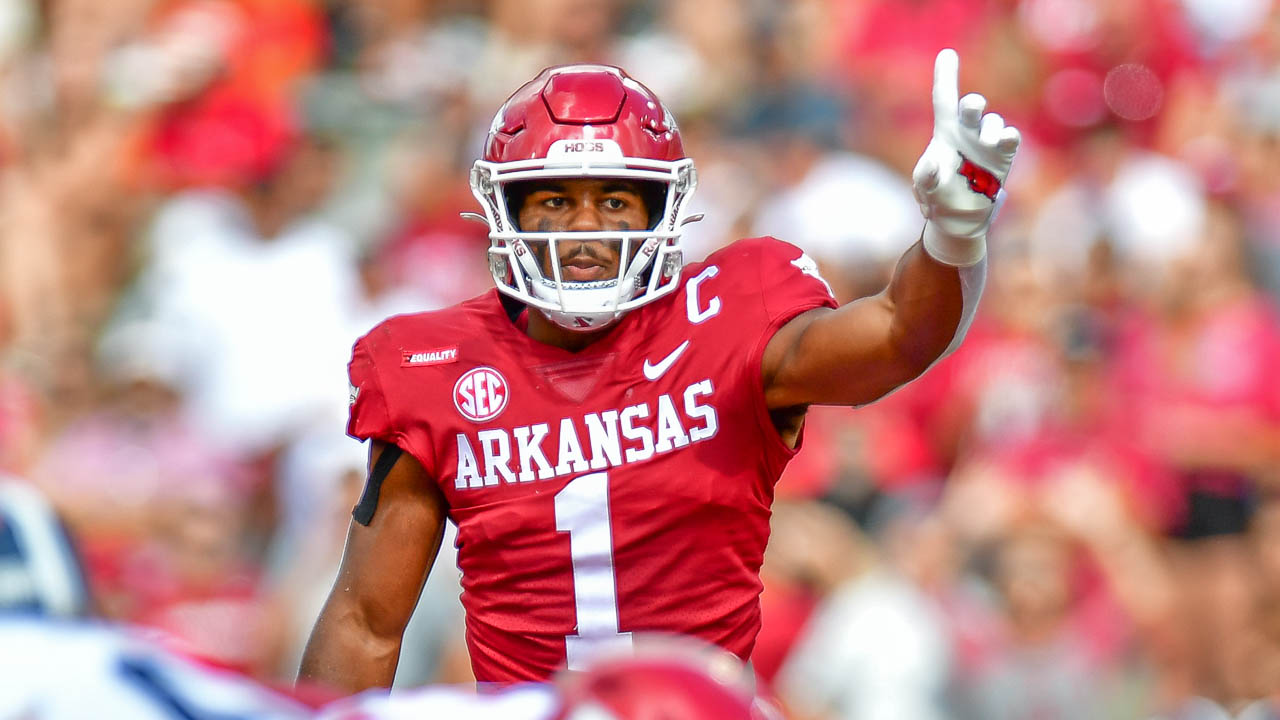 That's right, two safeties in the first five picks of the draft. Rodney McLeod is on the last year of his contract, and has started just over half of the possible games in a 4-season span. Also, free agent acquisition Anthony Harris is on a 1-year deal, and he's not quite playing up to the billing. Jalen Catalon is an energetic natural playmaker who is known for big hits, and big plays. With high level coverage skills and closing speed, Catalon plays at both safety positions in the Razorbacks defense. He projects as an immediate starting safety in the NFL with a pro-bowl ceiling. 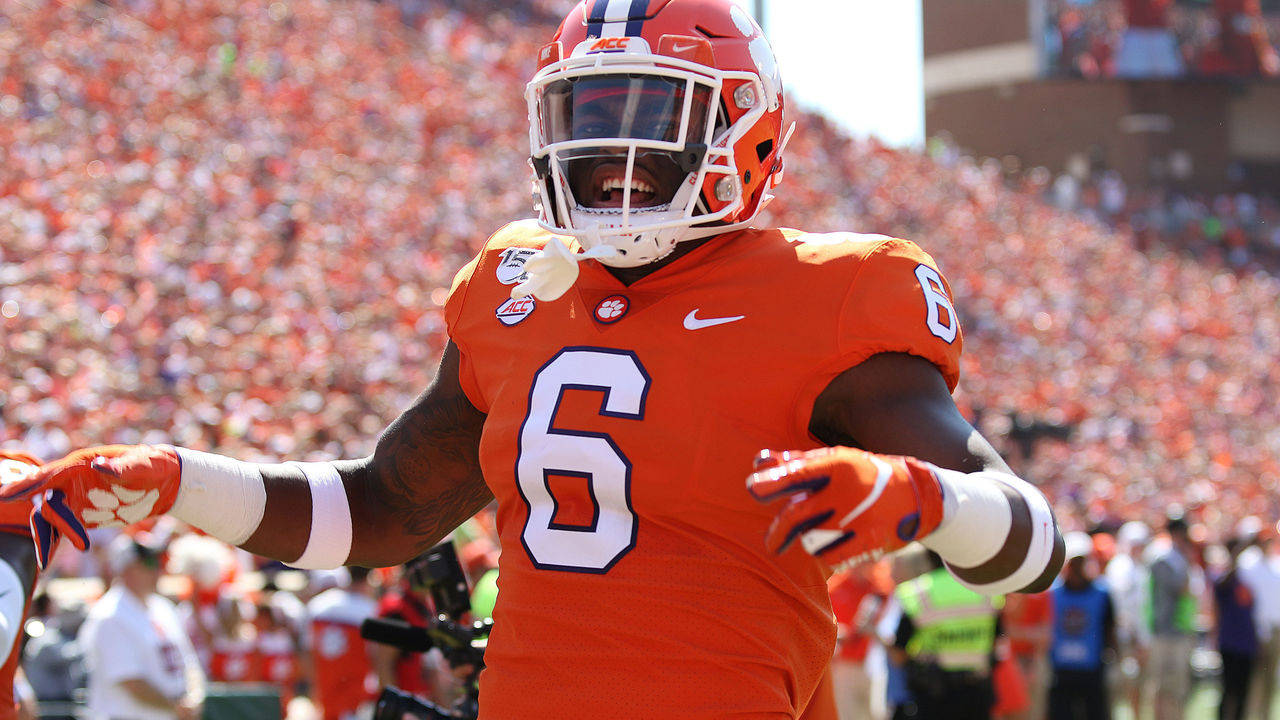 Smaller linebacker, with impressive athleticism in coverage, and extremely physical in run defense. Mike Jones Jr. features outstanding closing burst, sideline-to-sideline speed, and ability to cover out of the backfield, or drop back into zone. Before transferring to LSU for the 2021 season, Clemson deployed him as a pass rusher on passing downs, where he displayed the ability to shoot gaps and break blocks. He's a true second level versatile defender, who projects as a plug-and-play starting MIKE linebacker in the NFL. 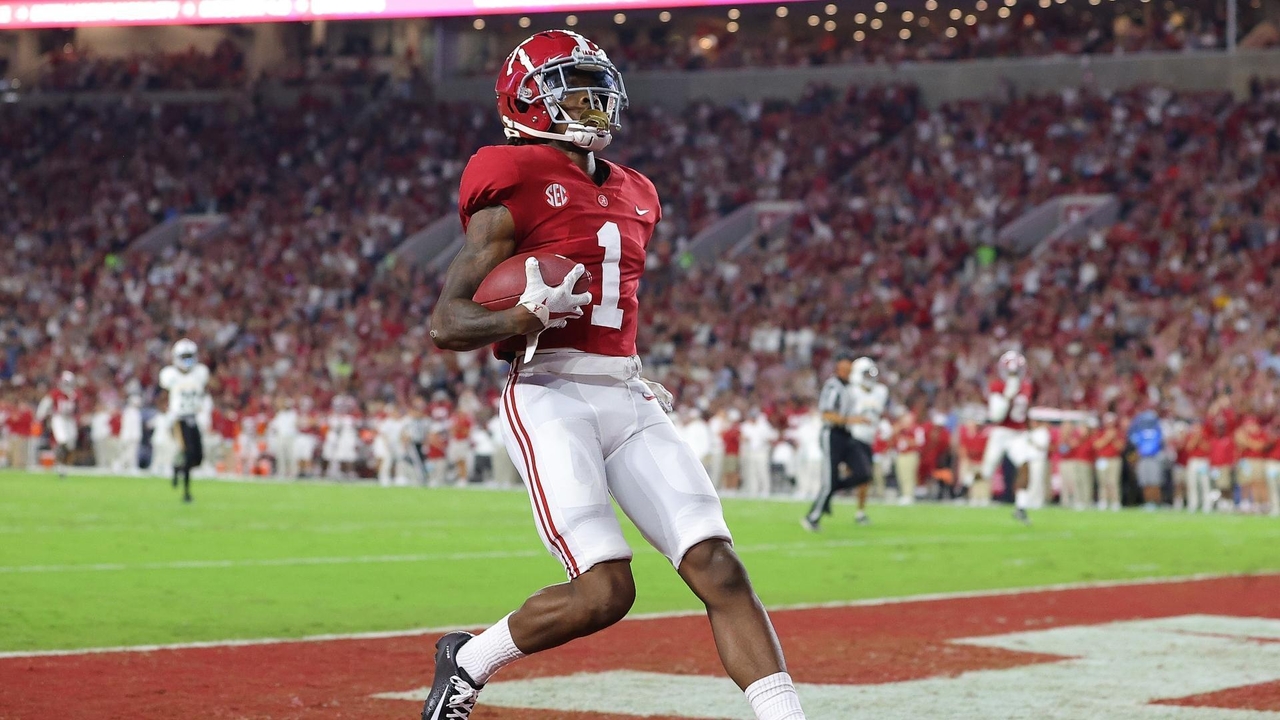 An electric and quick-footed receiver, Williams has a desirable blend of length and speed to reach the deeper portions of the field, and catch passes over the top of defenders. Primarily used at Ohio State as an outbreaking route specialist, he can slam on the breaks and redirect on a dime. At Alabama currently, he's utilized as both an outside, and slot receiver. A lack of experience as a starter keeps him locked in as a 3rd to 4th round prospect, but he's having a fantastic season this far, hauling in 29 catches for 587 yards and 6 TDs, averaging 20.2 yards per reception.

Son of Tennessee Titans Head Coach Mike Vrabel, Tyler put together an impressive collection of starts in his first year as a redshirt sophomore at left tackle. In 2021, he's transitioned to right tackle for the Eagles offense. Features an aggressive punch that is well placed and times. Does well to stay square in his blocks, sustain leverage, and maintain control with his powerful hands. Easy mover in pass protection, slides seamlessly to mirror rushers. Can sometimes block a bit top heavy, will need better consistency in his bend, to ensure he doesn't over extend.

Physical and competitive runner with good patience to allow for blocks to form and find daylight. A one-cut north south runner with size who picks up yards after contact by the bushel. While Price doesn't have the speed to consistently win as an outside runner, he does take good routes and often gains yardage rather than lose. Features rather ordinary burst and elusiveness, tends to be upright when running the ball and will have to be coached in mechanics when hitting the line. Limited opportunities in the pass game, but showcases the ability to catch balls out of the backfield, and is also a willing blocker. Would be best utilized as a change-of-pace back in a shared backfield who can grind out short yardage.

D.J. Dale is a stout presence in the middle of the Alabama Crimson Tide defensive line. Possesses good upper body strength to stack and shed blocks. Presents value as a gap-stuffer and run defender. Keeps his hips and pad level low to the ground, a solid technician. Primarily used a 2 down player, he will need to add a variety of tactics to provide value as a pass rusher, currently only features a bull rush. He would be a good depth option in the Eagles deep defensive tackle rotation.

With Zach Ertz headed to Arizona after a heroic career in Philadelphia, all-eyes turn to Dallas Goedert as the featured tight end in the Eagles offense. Behind him sits undrafted free agent Jack Stoll, then Tyree Jackson and Richard Rodgers on the practice squad. Jake Ferguson is the starting tight end in the Wisconsin offense. He features an impressive catch radius, as well as surprising athleticism to find gaps in the middle of the field. Is a willing blocker in the run game, but is not a finished product in that area by any means. A 2-year starter who is valuable as a depth tight end that can learn from a veteran.

For someone who is so inexperienced at the college level, Joey Porter Jr. has a vast amount of untapped potential. He has incredible reach and natural length, which he uses to maintain influence inside the contact window and make plays on the ball. Some scouts advocate for Porter Jr. to move to safety at the next level, but he would be best utilized in a scheme-specific environment, where he can pay press-man coverage against taller receivers, or in a deep zone. He has top-flight physical tools that will need much refining, but the ceiling is higher than you think.

Ranked as the #3 dual-threat quarterback in the nation, Jayden Daniels is a slimly built pocket passer, with premiere athleticism when escaping pass rushers critical first downs. He can be a threat to the defense as a runner, but clearly prefers to play from the pocket and trust his arm. Outstanding situational awareness and poise as a passer, he led his conference in yards per attempt. He will need to get stronger, so he can drive the ball into tight windows, as well as absorb hits from NFL defensive linemen. Features a big arm, but an excessive windup, and somewhat mediocre accuracy.