It's that time of year folks, out of the playoffs and nothing better to do than play TDN's mock draft simulator over and over again. No reason to preface this with anything substantial, here's a full six round pick for you to soak in. 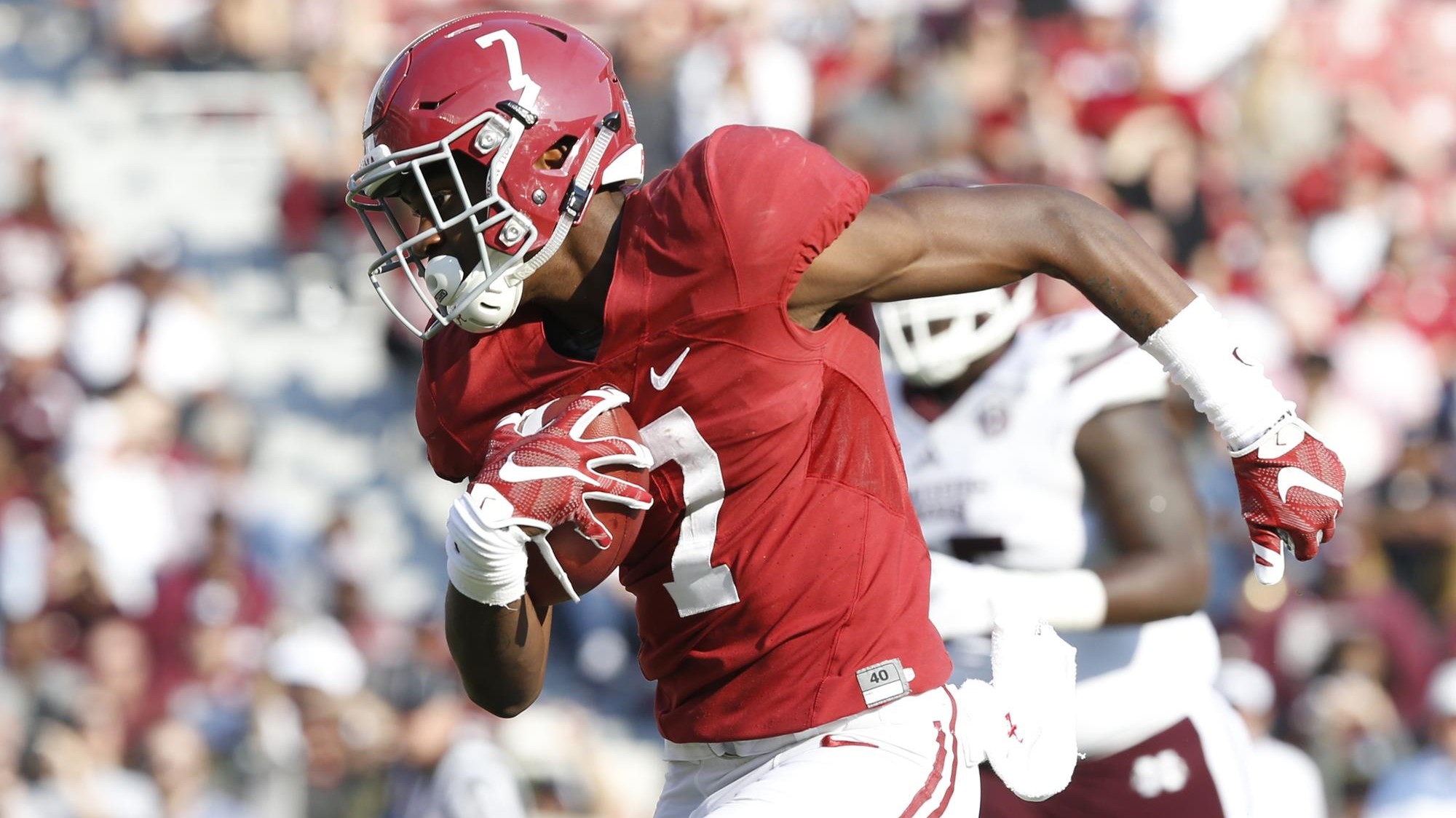 For a few months now, the common theme here on BGN is that the Eagles should pick a WR in the first round, and subsequently walk away with at least two receivers by the end of day 2. That said, the Eagles could find themselves in a situation where the top few receivers are all off the board before they pick, and the next crop off guys might not be worth a first round value, or fit the scheme. So I'm going with Alabama cornerback Trevon Diggs here. Jeffrey Okudah is the top corner in the class, but make no mistake Diggs is a baller, and he comes to play every game. In 2019, Diggs recorded 37 tackles, 3 ints, and 8 passes defended for the Crimson Tide. He has good size at 6'1" / 195 lbs and is clocked at running a sub 4.5 40 yard dash. With some roughness around the edges, given that he played WR his freshman year, Diggs will require some development. But he has above average instincts, understands how to use positioning and his body as leverage to defend passes downfield, and projects as an immediate plug-and-play outside corner in the NFL. 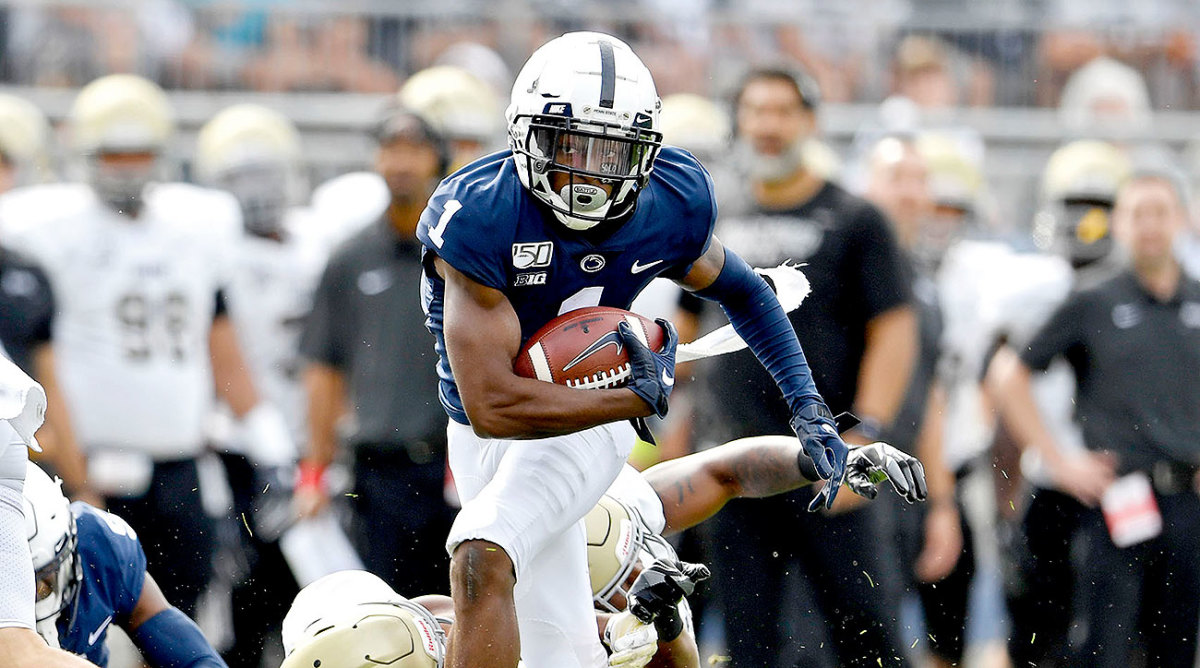 I'm going to be honest BGN, I really want to take Jalen Reagor in the 2nd round. Unfortunately, with the Eagles picking in the latter half, I expect some of the fringe WRs like Reagor, Higgins, Jefferson to be off the board. Not to mention, despite how much I see commenters wanting to ship Alshon off to a team along with a 4th rd pick, solely for the cap space -- chances are Wentz enters 2020 with Jeffery and DJax as his #1 and #2 respective wideouts. This leaves the sole gap in the receiving corps at slot, with Agholor more than likely leaving in free agency. K.J. Hamler out of Penn State is a speed demon that projects as both an inside and outside receiver with big play ability, above average route running, and elite burst. In 2019, he totaled 56 receptions for 904 yards and 8 TDs, at 16.1 yards per reception. 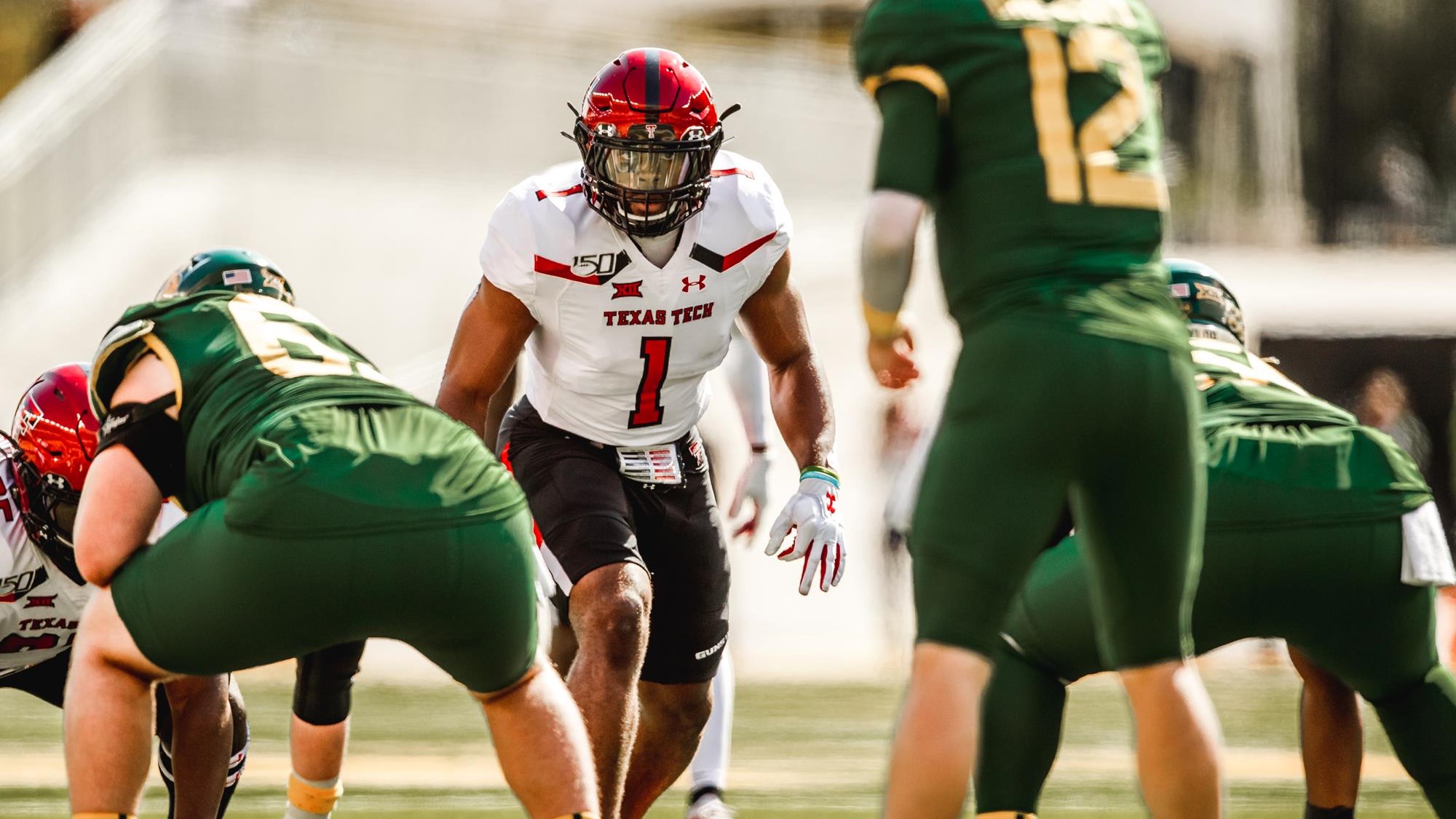 In some mock simulators, I've seen guys like Anfernee Jennings and Julian Okwara fall all the way to the 3rd round, but I'm for the most part inclined to believe that won't happen. That leaves Texas Tech's Jordyn Brooks, who by all means is worth the pick. The Eagles took Jordan Hicks out of Texas in the 3rd round, 84th overall in 2015 because he presented the ability to be a complete interior linebacker right out the gate. He had his injury issues during his time in Philadelphia, but with instability and mediocre play at the linebacker position in 2019, most fans wished we'd found a way to retain Hicks. Well, that's where Brooks comes in, he provides every upside that Hicks did, without the injury history. He's an immediate starter at any linebacker position, with experience in all 3 spots, as well as above average coverage skills, athleticism, tackling, and ability to read offenses and make defensive adjustments. Brooks accounted for 108 total tackles, 3 sacks, and 1 forced fumble for the Red Raiders in 2019, and weighs in at 6'1" / 245 lbs. 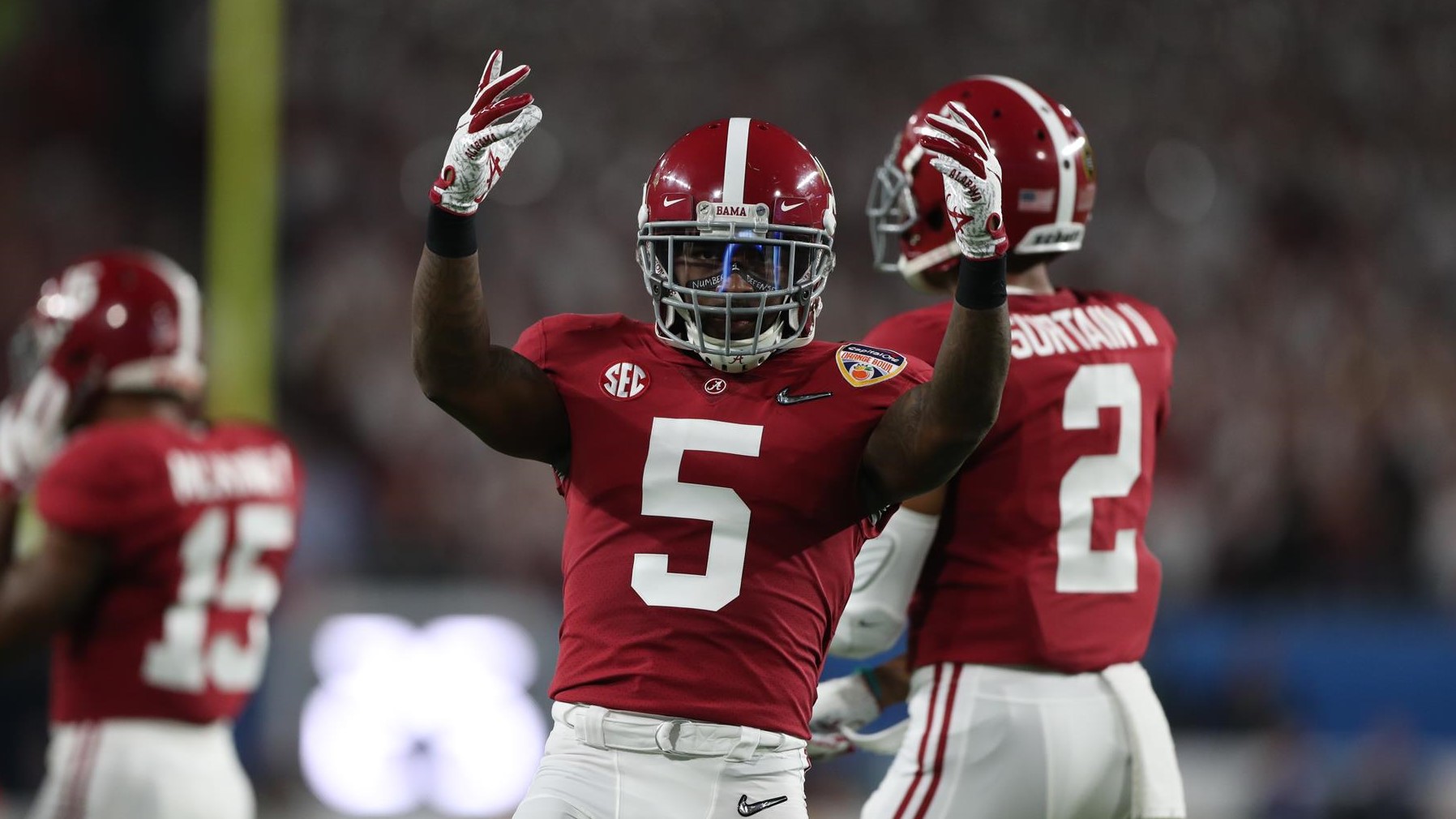 What's that another Alabama player you say? You're damn right. Shyheim Carter is not an elite level prospect like Grant Delpit or Xavier McKinney, but he's a solid player who took over for Minkah Fitzpatrick in the safety/cornerback hybrid role under Nick Saban. Rodney McLeod is a free agent, and Malcolm Jenkins says he won't return under his current contract, but with so many other holes to fill, I'd wager they'll both be back in midnight green for 2020. That leaves the #3 safety role, which in reality is a hybrid role that moves between safety, slot corner, and nickel LB. In 2017, the Eagles employed Corey Graham in this role, and he filled the role adequately. The same can't be said for 2018 Corey Graham, and 2019's Sendejo and Cyprien. Currently Marcus Epps is the #3 safety on the roster. Shyheim Carter is on the smaller side at 6'0" / 195 lbs, but he doesn't play like it -- he hits hard, and is a more than adequate open-field tackler. He has the ability to play both man coverage and zone and the athleticism to keep up with RBs out of the backfield. Carter recorded 43 tackles, 1 int, and 7 passes defended in 2019. 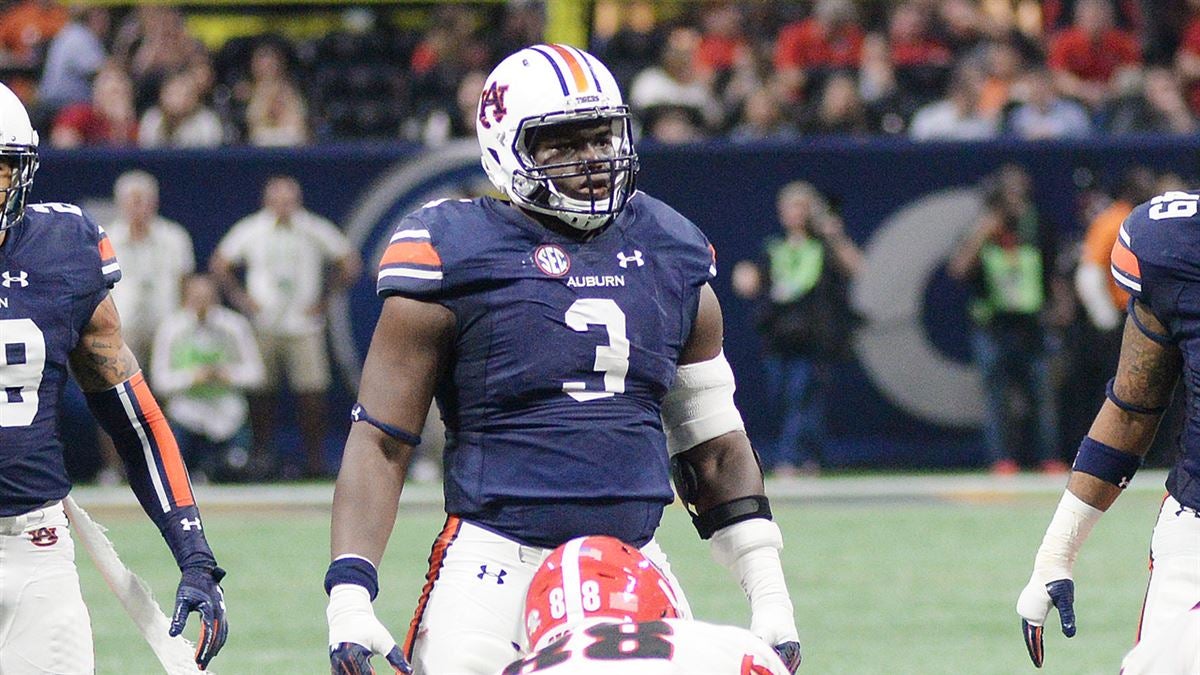 We're sticking to players from Alabama...this one just happens to go to the other big football program in the state. Marlon Davidson is a solid defensive end prospect with the ability to line up both inside and outside, who's described by team sources as smart, high motor, and technically proficient. He some skill set limitations in a deep class of pass rushers, which explains why he's projected to go anywhere between rounds 3-5. Davidson logged 49 tackles, 7.5 sacks, and 2 forced fumbles in 2019. The Eagles are not specifically lacking at the defensive end position, with Graham and Barnett starting on the edges, Curry, Sweat, and Hall as depth, and having spent another 4th round pick on Shareef Miller in 2019, but it never hurts to get deeper on the defensive line. By all accounts, Davidson is a better overall and more polished prospect than Miller coming out. 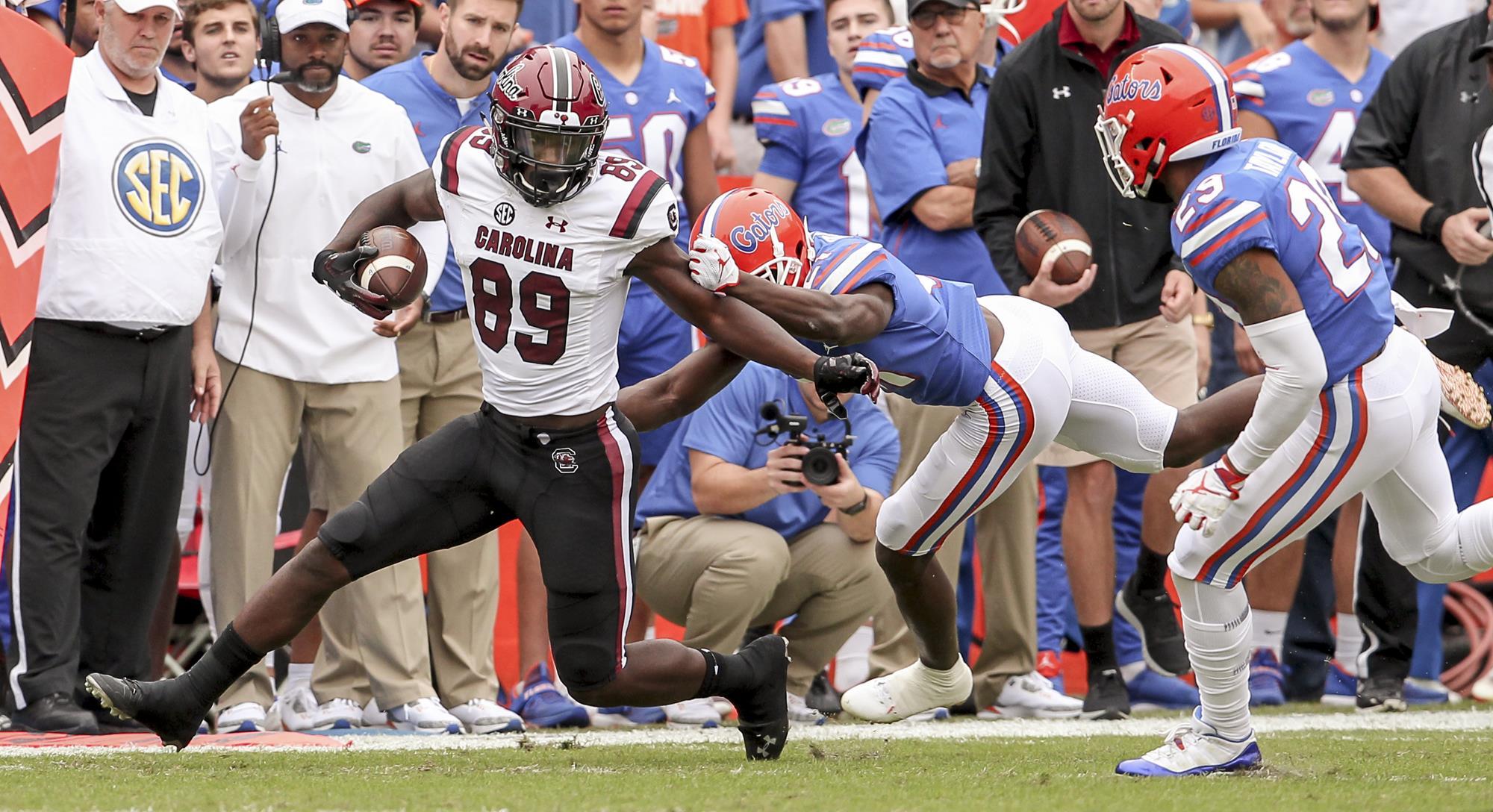 See? I took a second wide receiver, it just had to wait until day 3. And don't be fooled, Bryan Edwards is a better receiving prospect than his draft billing. The jelly to Deebo Samuel's peanut butter, Edwards; a 4-year starter at South Carolina stepped into the spotlight in 2019 and did not disappoint, hauling in 71 receptions for 816 yards and 6 TDs for the Gamecocks. Edwards is a polished receiver with quickness, size, and run-after-the-catch skills. At this point in the draft, the Eagles are entering 2020 with Alshon, DJax, Hamler, and JJAW as locks to make the roster, and Ward, Davis, and Burnett as fringe roster guys. Edwards would be able to come in and contribute right away a la the 2017 Mack Hollins role, but presents more versatility than Hollins did at the time. 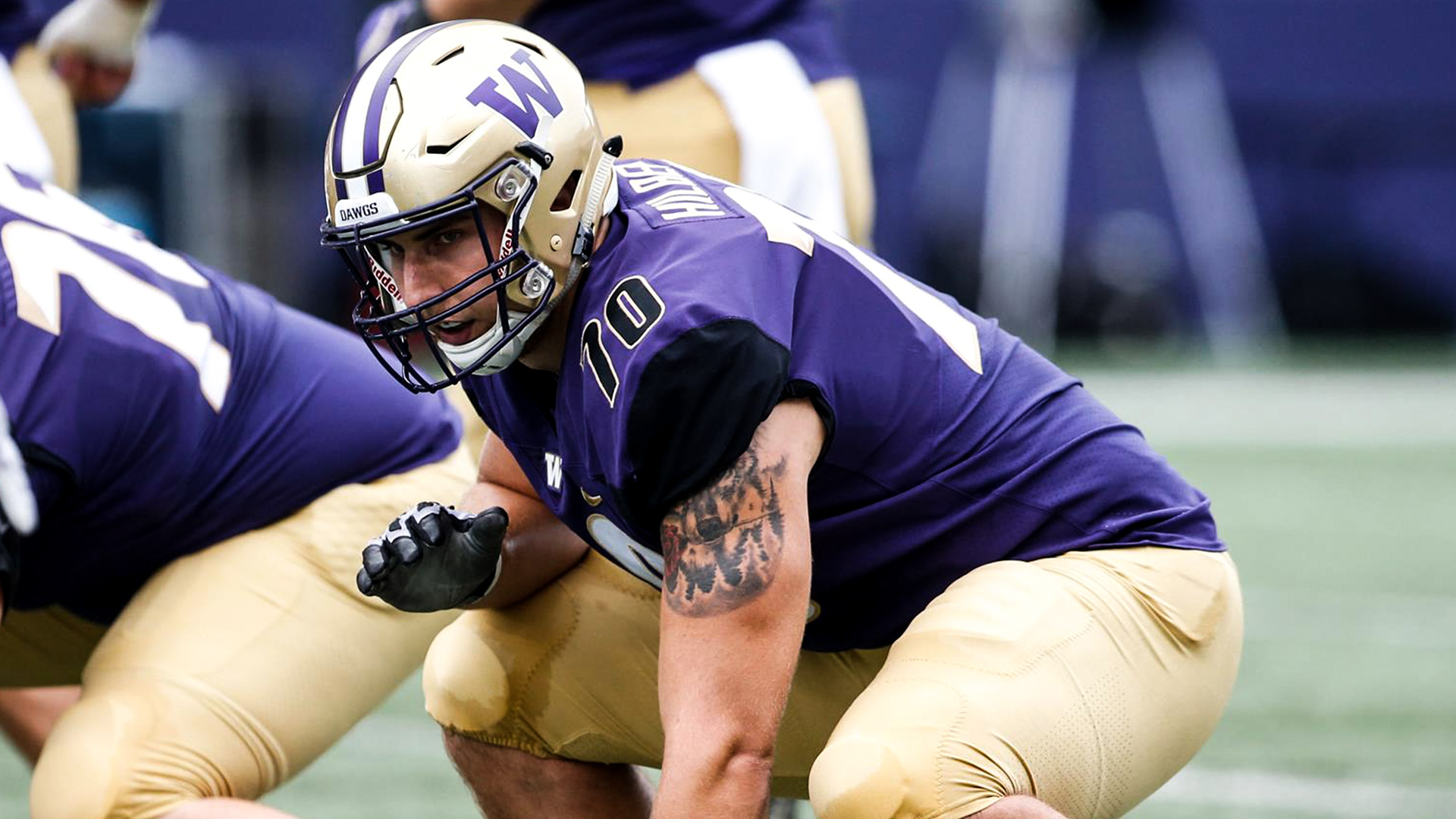 Whether or not the Eagles retain Jason Peters, does not the affect the purpose of this pick. Halapoulivaati Vaitai is likely to leave in free agency for a starting job, in a league starved for good OL play -- this leaves a hole in the backup tackle position. Vaitai not only filled in admirably for Peters during the 2017 superbowl run, but he also showed the ability to play at both tackle positions, as well as right guard. With him gone, depth across the line has taken a hit, and questions surround whether or not guys like Mailata, Herbig, and Pryor can be relied on to take meaningful snaps in 2020. Jared Hilbers not only filled in for Trey Adams at left tackle in 2018, but he played the entire 2019 season at right tackle. Described as an athletic fluid blocker in space that excels in the run game, Hilbers is projected to go between round 4-6. 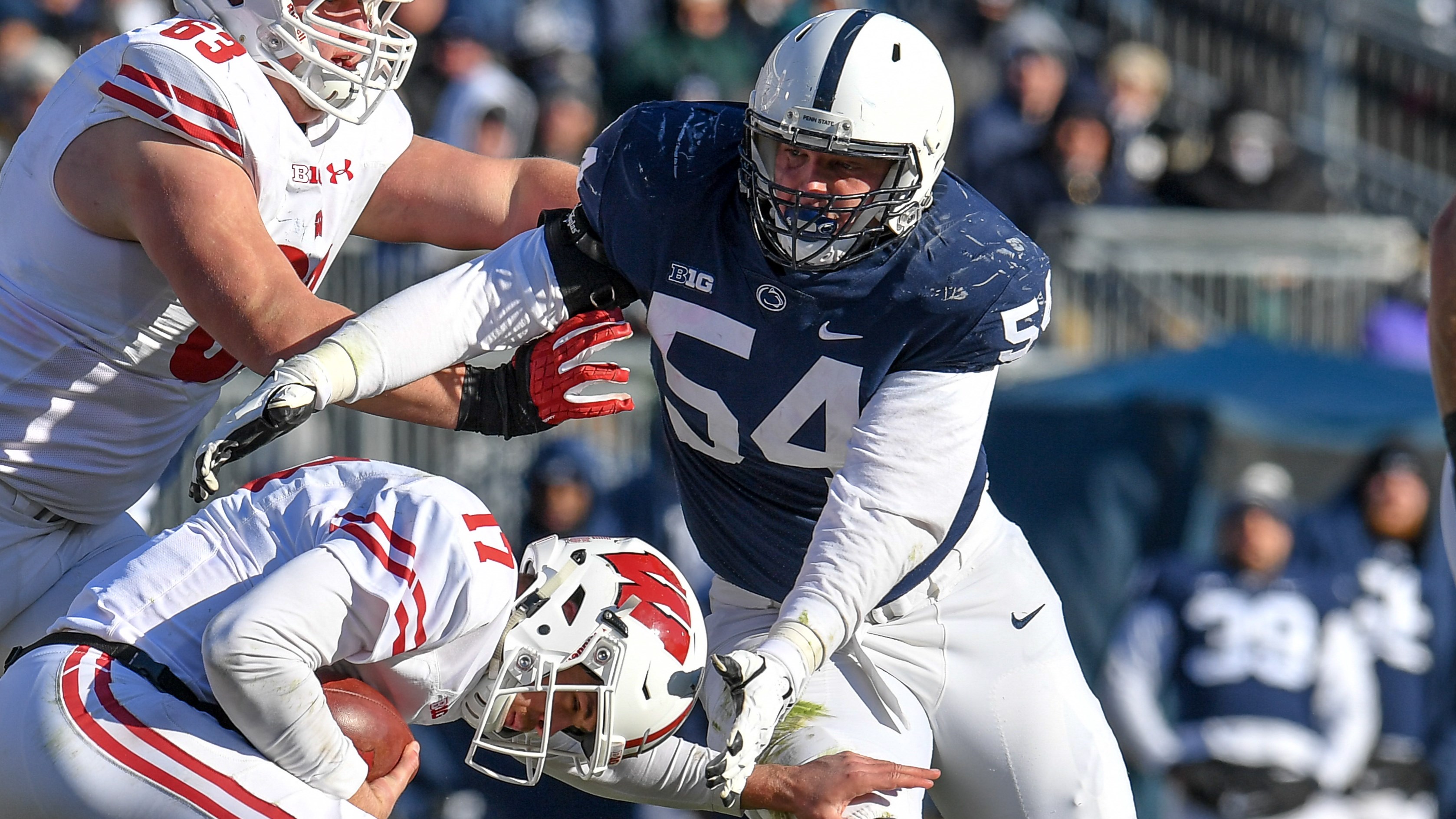 At one point before the 2019 season, the Eagles had so much depth at the defensive tackle position, they felt comfortable letting wildcard double-doink ball tip hero Treyvon Hester go. Well, after the #2, #3, and #4 defensive tackles went down with injuries, the Eagles were relying on the likes of practice squad call ups Anthony Rush, Bruce Hector, and Albert Huggins to shore up the massive hole in the defensive line. Going into 2020, Cox and Malik Jackson will remain the starting interior d-linemen, and there's a chance Jernigan and Ridgeway will return after injured and unproductive seasons ruined their market value. With uncertainty regarding the depth at the position, Howie Roseman and company will want to add a DT with the ability to rush the passer and stop the run. Robert Windsor is a high motor, athletic player with a lot of upside as an interior pass rusher. He collected 39 tackles, 7.5 sacks, 2 forced fumbles, and 11 tackles for loss in 2019. 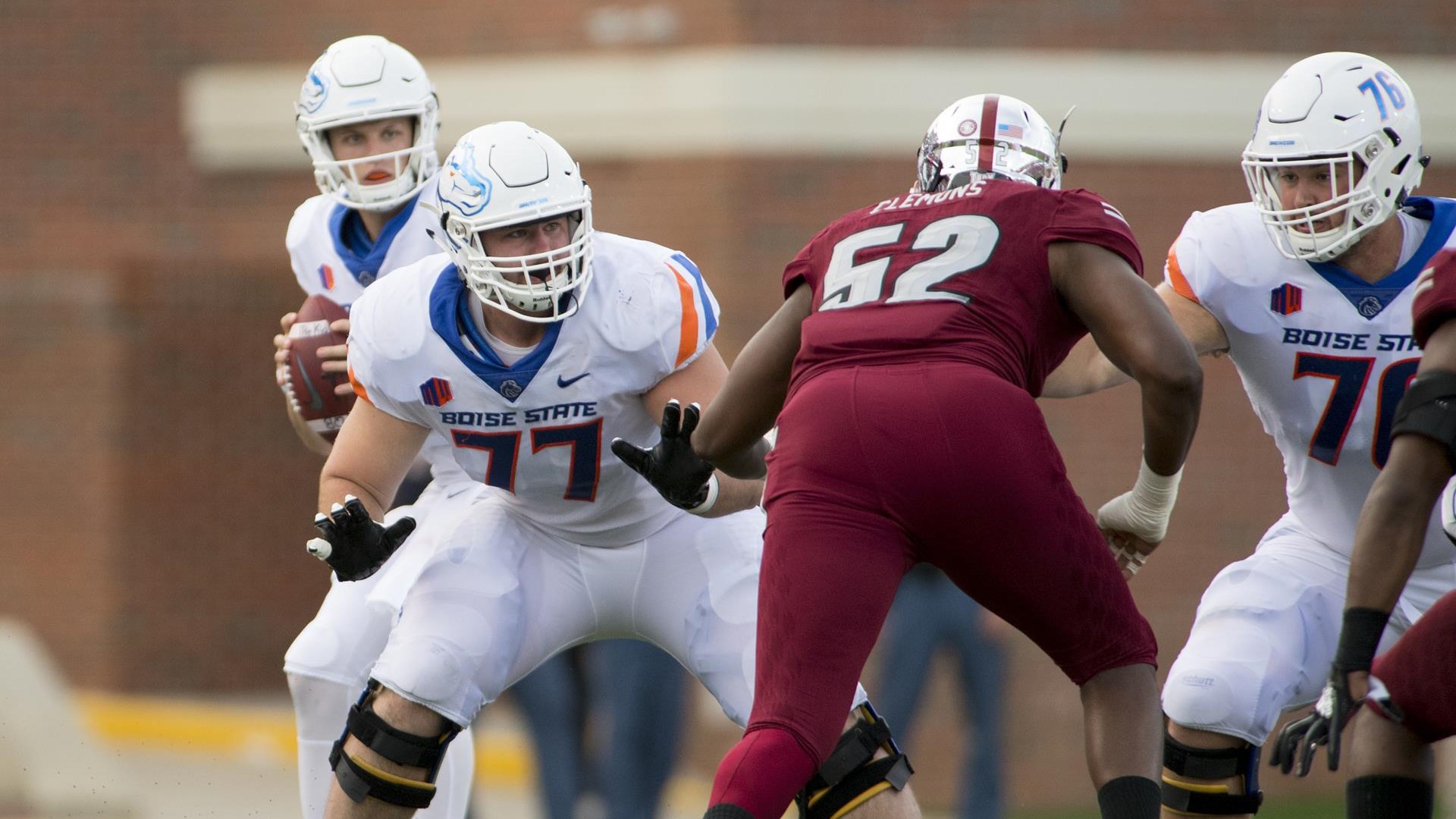 Guard is not specifically a need, and with my earlier pick of Hilbers as backup OT, the OL is all but shored up going into 2020. That said, if someone like center Jason Kelce gets injured, Seumalo moves over and then either Herbig or Pryor are thrust into a starting role, there's no more Vaitai or Wisniewski to run to. Molchon is a solid blocker that can play very position on the line, and is more athletic than his size indicates, coming in at 6'5" / 322 lbs. He did a great job in 2018 effectively opening holes in the run game for Alexander Mattison. Molchon would compete with Matt Pryor and Nate Herbig for a spot as interior OL depth. 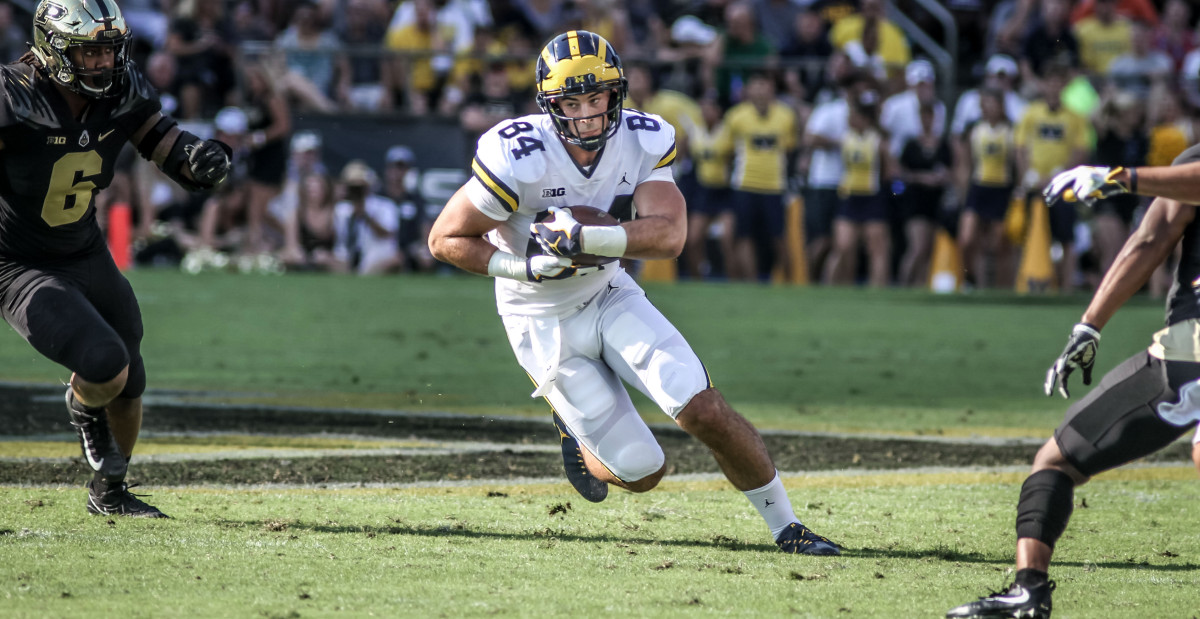 Again, not specifically an area of need, but looking to provide depth here. The Eagles sport the best tight end duo in the NFL with Zach Ertz and Dallas Goedert. Despite this, their #3 TE position has constantly been in flux, with the oft-injured Richard Rodgers on and off the team, Alex Ellis coming up and down from the practice squad, and glorified wide receiver Josh Perkins taking meaningful snaps in a 2020 wildcard game. Sean McKeon's stats are very underwhelming on paper. He had 13 catches for 235 yards and 2 TDs on the year. That said, he's an above average blocker, and when the ball happened to be thrown his way, he made sure to catch it. He could stand to gain some strength and size for the NFL, but he projects as a Y-blocking TE in the NFL.

If you made it all the way ti' the end, thanks! Please feel free to leave your likes, dislikes, thoughts, and comments below. Also post your own mock drafts for us to talk about.

Do you approve of this draft?