With the NFL Draft quickly approaching, you're probably already hearing the buzzwords associated with it. Waist Bender, Value Pick, High Ceiling, Plug and Play ... are your ears ringing yet? One term that has been getting more and more use in recent years is "positional value" -- and rightfully so. Positional value as far as the NFL Draft is concerned is the idea that certain positions are more valuable than others, so much that you should consider passing on a better player at one position in order to select a lesser player at a more valuable position. It's pretty hard to argue against this concept on a macro level. Take the QB position; you only play one of them in a game, hopefully only one the entire season and they touch the ball every play. Compare that to DB where you play five or six of them in every game, maybe 10 or more of them in a season, and they may never touch the ball.

On a more intricate level positional value becomes debatable, New York Giants GM Dave Gettleman seemed to directly contradict the idea when he drafted a RB -- statistically the easiest position to find production at -- with the No. 2 overall pick in the 2018 NFL Draft. Positional value goes beyond the draft though, it also ties into how you spend your cap money. If you value something you are more willing to devote resources to it. I hate cars, I get no enjoyment from them and see them simply as a necessary tool for transportation, I don’t own a car and devote almost no time or money to them. I like traveling, I get great enjoyment from it, I see it as a necessary part of a happy life, I travel a lot and spend a good portion of my time and money traveling. In an attempt to understand how the Eagles value each position I started looking at how they have used their assets both in draft picks cap spending since Howie Roseman took the reins.

The first thing I did was track how the Eagles invested their money each of the past three years. The chart below shows the percentage of cap spending by each position group from 2016 - 2018. 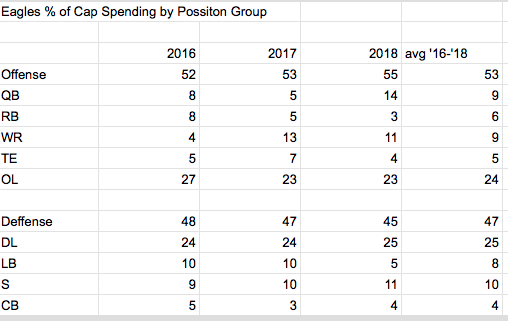 With just a quick glance and you can see that the Eagles have been pretty consistent in how they use their cap dollars. Anyone familiar with the Eagles roster moves over the past three years can spot the anomalies and link them to specific moves; signing Alshon Jeffery, cutting Mychal Kendricks, keeping Big Dick Nick. The real constants here are the significant investment in both the offensive line and defensive line as those two positions groups account for almost 50% of the teams spending year over year.

The next thing I looked at was the Eagles use of draft capital. I took the draft history for the past three seasons and then assigned the following point value for draft picks by round

This isn't perfect but it somewhat coincides with the standard draft pick trade value chart you often see. (No, I was not taking the time to look up every single pick on the chart.)

I accounted for draft picks the Eagles traded away by assigning the points to the position group of the player they acquired. You'll see 2018 10 points were assigned to the WR position for the 2019 3rd round pick used on Tate; again this isn’t perfect but it gives you some idea of how the Eagles have used their draft resources under Howie's watch. On the right side of the chart I listed the percentage of the total draft capital the Eagles have used in the past three seasons. Aside from the Wentz trade jumping off the page two other thing stick out, the Eagles have used plenty of draft capital on the DL and CB position while pretty much ignoring safety and LB.

Here are the numbers from the two charts above put into pie graphs. 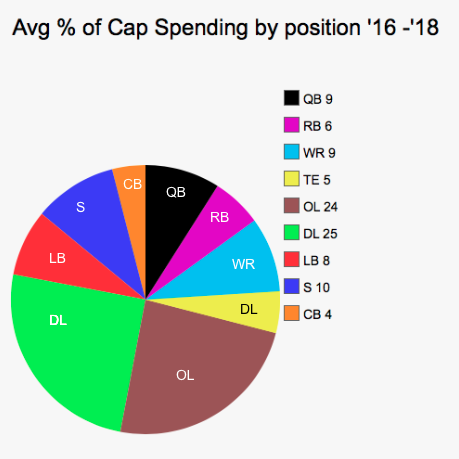 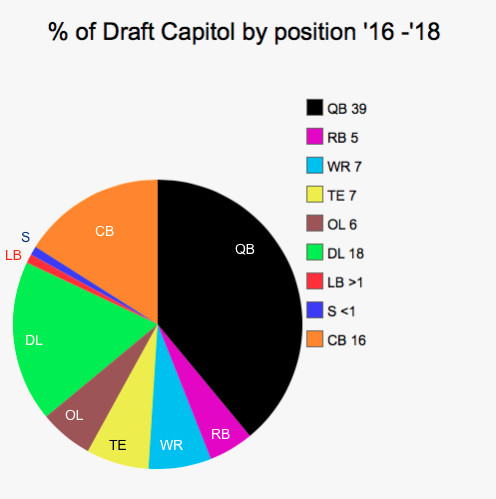 I then combined the two to come up with an idea of how the Eagles used all their combined assets in roster building. 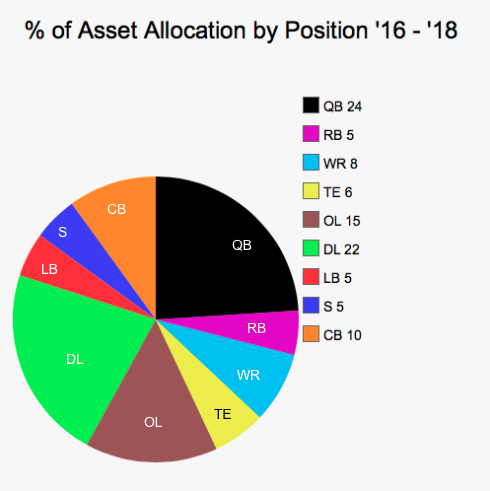 You can easily see that there are two position groups the Eagles invested in at a disproportionate amount; QB and DL. The QB position took up an enormous amount of draft capital over the past 3 years and rightfully so; it’s the most important position in all of sports and the Eagles made a move for a true franchise player at that position. The investment of draft capital at QB has been offset by the comparatively low amount of cap space used at the position, even with Foles' 2018 cap hit inflating the cost. In the future, the resources invested in QB position will drastically and almost exclusively shift to the cap side of the equation as Wentz gets his mega deal and there is no need to invest more than a Day 3 pick in a backup.

Equally as important to the Eagles has been the DL group which demanded the 2nd greatest amount of draft capital and also demanded the largest cap commitment. Considering how heavily the Eagles rotate their d-line, I think this makes sense. I'd expect both the cap commitment and the use of draft picks to continue permanently as it is a fundamental belief of both the coaching staff and front office that generating pressure on the opposing QB is essential to winning football games.

If I were making tiers based on how the Eagles value positions, I would probably place the OL in the top tier along with QB and DL. The reason being that their stellar play has kinda negated the need for draft picks and also allowed the front office to continually restructure their cap numbers well under market value. Jason Peters and Lan Johnson have both been playing for about $8mm a year, not even in the top half of the league for OT. Arguably the OL should be the highest paid position for the Eagles. I could see the Eagles spending habits at the OL position shift this year, as age catches up with them they may feel the need to invest a high draft pick at the position or even feel comfortable moving on from Peters.

The only other position group above the median is the CB group. The way the Eagles have addressed the position here is kind of the exact opposite the OL group, with very little cap space utilized they have thrown a crap ton of draft picks at CB in the past three years. I think this trend continues as they really don’t have anyone they need to pay and are probably comfortable letting Ronald Darby walk and receiving a compensatory pick while playing the young guys on the roster the season.

I think this starts to paint the picture that the Eagles value these three positions (QB, OL, DL) more than the rest, but wait! What if we were to combine the WR and the TE position as pass catchers? That would put them above the median, they would be fourth in draft capital and third in cap spending with both at 14%. From a numbers standpoint, this would kinda match up with the number of roster sports dedicated to OL and DL at about 10 each. So pass catcher is probably pretty important to the team as well.

So I would put CB and the newly created Pass Catcher position in the second tier and I would definitely place RB, LB and S in a distant 3rd tier. Safety they seem to be fine with the "Studs and Scrubs" method; investing heavily in 2 players and then filling in the rest of the spots with trash heap guys. Trading a conditional 7th round draft pick for something called Deiondre' Hall this year is the only draft investment they have made. I’m not sure this changes much with McLeod restructuring to stay one more year. They may finally invest in a mid round pick to eventually take over which is something we have heard for the past few years now.

LB was basically ignored and filled in with replacement level players and safety converts this year. It will be interesting to see what happens with Jordan Hicks, about $5MM a year would actually fit into the Eagles budget for the LB position based on the past three seasons and I could actually see that being a fair market value deal. If he were to get an offer of anything higher then $5MM per I think he would be out the door.

Lastly RB; the position that does not matter. It is the only position in the bottom three of both cap spending and draft capital. Sorry Round 1 RB Truthers, it's not happening, you can get starting level production from Day 3 picks, Bryce Love is an UDFA…

Here's one final pie graph for you. 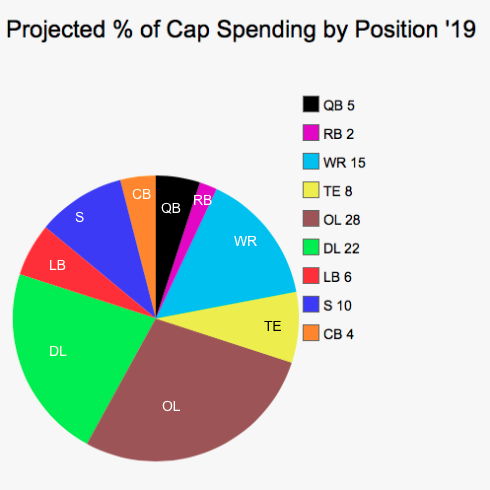 For this one I removed Nick Foles $20MM from the equation because he isn't going to be on the roster.

Comparing what the Eagles have done in the recent past to what they are scheduled to do might give us an idea of how free agency will play out this year. There are a couple numbers that don't fit in with what the Eagles have been doing as you can see from the projected 2019 numbers on the right-hand side.

Here are a couple things I could see as being an indicator for what the Eagles do this offseason.

WR is high, bad news for Nelson Agholor... His $9mm fifth-year option is about 4-5% of the total cap and with the emergence of Godert I think we will be a 12 personnel team going forward, no need to invest heavily in a slot WR. This draft class is also loaded with slot WRs, I’d bet money he's a goner. I think he has trade value and someone will give up a Day 3 pick for him.

OL is slightly high and Stefen Wisniewski is another guy I think has some limited trade value like maybe a pick swap or something. He is in the last year of his deal, moving him would free up another 2% of cap space.

RB is a little low which makes sense cause they probably need to pick someone up in free agency unless they just admit that RB is the least valuable position in sports and then just roll with a couple more UDFAs.

The last thing I think these #s could be hinting at would be the Eagles making a significant move on the DL. The cap commitments is below what it has been each of the past three years and the age/contract status of the group makes it prime for a significant addition. Restructuring or cutting Timmy Jernigan will create some room and I believe they will use that along with whatever other room they have to invest another 5-7% in the DL. that means someone is getting +10MM per to play for the Eagles next season.