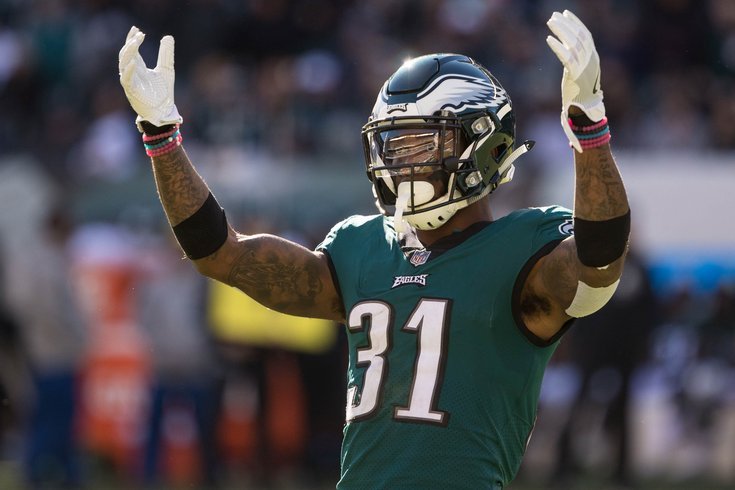 It's no secret to you, me, or anyone that the Eagles have long sought stability at the cornerback position. From Cary Williams and Bradley Fletcher, to Byron Maxwell and Nolan Carroll, the Eagles cornerback group has been getting roasted by opposing offenses for nearly a decade at this point. In recent years, GM Howie Roseman has made some attempts to address the issue, by drafting Sidney Jones and Rasul Douglas in the 2nd and 3rd rounds of the 2017 draft respectively, sending a 2nd round pick and WR Jordan Matthews to the Bills for Ronald Darby in the same year, and drafting Avonte Maddox in the 4th rd of the draft in 2018. Despite all this, the Eagles secondary gave up the 3rd most passing yards in 2018 season, and the 10th most through the first 9 weeks of 2019 (not mentioning having been decimated by injury). That said, through all the rotating bodies, and big yards given up, there's been one model of consistency as far as play goes, and that's Jalen Mills.

The Green Goblin is made for Philadelphia

For anyone that watches baseball, the 2018-2019 offseason was a big one in Philadelphia. The no longer rebuilding Phillies took their first step toward World Series contention by inking 26 year old superstar outfielder Bryce Harper to a 13 year 330 million dollar contract with no opt-outs. Harper, who had previously been the target of "boos" Philadelphia sports fans as a member of the division rival Washington Nationals, turned himself into a beloved player by doing one simple thing -- he bought in. Unlike Harper, Jalen Mills had little fanfare when he first stepped foot on Philadelphia soil, to ink his contract, and have his introductory press conference. Mills was picked in the last round of the 2016 NFL draft, an area that's normally reserved for fringe roster players and special teamers at best. Despite his draft status, Mills made the most of his opportunities, caught the eye of defensive coordinator Jim Schwartz, and played himself into a starting role in the Eagles defense. Is there anyone better who encompasses the culture and mindset of Philly fans? and to show his appreciation for the team who took a chance on him, he dyed his hair green, and took on the nickname "Green Goblin" -- Just like Harper, Mills bought in.

He's better than you think

If any name has repeatedly made it's way onto Eagles fan's naughty list it's Jalen Mills. During the 2016 draft, Mills was billed as an aggressive player that's technically proficient but not athletically gifted, and has had a bad tendency to give up big plays by biting on double moves. Because of this, he's often caught the ire of Philadelphia fans, and because of draft status; been considered to be a bad player who's merely starting because he's a Schwartz favorite, and due to a lack of better options. But did you know that the Eagles are 22-8 over the past 3 years when in games where Mills starts (and 15-6 when both Mills and Darby start)? What if I told you, since his return from injury in week 9, Mills has been playing at a pro-bowl level? Here's some numbers to put in in perspective for you:

Opposing Completion %
Opposing Passer Rating
"But Bees, those numbers are great and all, but none of that means Mills has singlehandedly fixed the pass defense. The secondary has other players too you know?"
You would be correct in that assertion. There's no way that Mills starting was the one solution the Eagles pass defense needed. But when one player is playing well and doing their job correctly, it means everyone else can focus on their responsibilities, and play better as well. That's not all, according to ProFootballReference, Jalen Mills has an AV (approximate value) of 11 this season (compare this to 7 in 2017). Approximate Value is exactly what it sounds like, it's a culmination of noteworthy tracked stats and metrics by PFR, translated to a player's on-field contributional worth -- similar to WAR in baseball, or WS in basketball. So if we consider that measure, and take a look around the rest of the league, here's what we find in terms of AV:
That's some elite company, right? What if we consider these other metrics:
Completion % allowed on Targets
Receiving Yards Allowed Per Target

Jalen Mills is in the last year of his contract, and if anyone in the much maligned cornerback group deserves a new contract it's him. So far, the Eagles have made out like bandits, paying a little more than $700k in 2019 for Mills, when other high profile CBs still on their rookie contracts are making an average of $3m. It's unbeknownst to us what his perceived value is around the league, but if he were to make anything similar to his productivity-wise peers, a contract such as 5 years / $57 million at $11.4m AAV could be what shakes out in the end.

If you made it to the end, thanks for reading! A lot of time and research went into this article, but I had noticed during my time watching the past few games, and the game footage afterwards that I hadn't heard Mills' name called out in negative way much at all, so I decided to dig a little deeper. With the 2020 draft on our minds, and corner as one of the needy areas, some BGN users had suggested cutting ties with Darby, Mills, and Jones, and starting from scratch. I made it a point to disprove the notion that Mills is a bad corner. Please join the discussion and drop your thoughts below!

Do you think Jalen Mills deserves a top CB contract?