"Camp Body, he isn't an NFL starting punter with that style"

These are the words that welcomed Cameron Johnston to the NFL in 2017. The 5'11 punter out of Ohio State had not long made the transition from AFL to American Football, learning under Nathan Chapman and his 'ProKick Australia' pathway program. When the soft-spoken Buckeye signed with Philadelphia, not many would have realized that he would develop into perhaps the most criminally underrated punter in the entire NFL, and prove himself to be more than capable replacement for the legendary Eagle Donnie Jones.

When Cameron Johnston was signed as an undrafted free agent out of Ohio State in the summer of 2017, not many fans took note of the ginger-haired Aussie - after all, they still had Donnie Jones to swoon over. In his debut pre-season game, Johnston punted twice in the confines of Lambeau Field, for a rather uninspiring 41.5-yard net average. His home debut showed far more promise, again only punting twice but this time for a net average of 48.5 yards. The rest of the pre-season was, unfortunately, closer to the uninspiring week 1 performance than the home debut, as he failed to average more than 43 yards per punt in the next two games, ending the 2017 pre-season with a net average of a rather average 43 yards. Unsurprisingly being nothing more than a camp leg that year, Johnston was waived in favor of Donnie 'Bag o'Bones' Jones, but Philly clearly liked what they saw in the then 25-year-old Australian, signing him to a future/reserves contract in early 2018.

Following a slightly shaky offseason performance, Johnston returned to the Linc to face the Pittsburgh Steelers to open the 2018 pre-season. It was here that fans began to take note of the sheer strength Johnston's leg possessed when punting, as, despite the punt being wiped from the stat-sheet due to a penalty, he boomed a punt 81(!) yards.(The follow-up punt went 57 yards too)

For reference, if this punt had counted it would have put Johnston 3rd on the all-time Eagles punting leaderboard for longest punt (behind QB Randall Cunningham and FB Joe Muha) and it would have been the longest by an Eagles punter ever, surpassing the current 80-yard record held by King Hill, a record that has stood unchallenged since 1962. For further reference, this punt would have been the longest punt in NFL history since Robert Malone's 84-yarder in 2013 and would have placed Johnston tied 13th on the all-time NFL punting leaderboard.
Unfortunately for punting fans like me, Johnston could not sustain this incredible form for the entire pre-season. Whilst he did average an impressive 49.3 yards per punt, the return game hurt him as opponents averaged 9 yards per punt return, decimating his net average to a measly 43 yards per punt for the second pre-season in a row. Johnston successfully made the 53-man roster unchallenged and made his regular season at home against Atlanta where he was called on 6 times averaging an impressive 47-yard net average and a long of 60 yards, as the defending SuperBowl champions began the defense of their title.
I won't go into detail about every game in the 2018/19 season for sake of repetition, but I will highlight one game in particular - week 11 @ New Orleans. Granted, many fans will be quick to want to forget this nightmare of a game, but it was here that Johnston proved himself as more than simply just a punter. His punting statistics for this game make for sorry reading - 4 punts for 159 total yards, with a net average of 36.5 yards. Ouch. However on one punt to NO return man Alvin Kamara, Johnston showed off his Aussie Rules AFL experience, body slamming Kamara to the floor whilst also drawing an unsportsmanlike conduct penalty from Kamara too, pushing NO back a further 15 yards. This won Johnston the Eagles' Toyota Player of the Week award, as he seemed to be the only player on the field who turned up to play that week.

"This is all cool, but how does this make his season one of the best seasons in Eagles history?"
The answer is simple, consistency. Over 16 games in the regular season, Johnston punted for an average of 45 yards or higher in 12 games and averaged 41 yards or higher in all but one game (New Orleans). His punts also rarely caused the Eagles ST unit any trouble either, averaging just 6 yards per punt return on his kicks, leading to not a single punt being returned for a touchdown with none being blocked in the 2018 regular season either. This was all in a season in which Johnston had to punt to some of the most dangerous returners in the league at the time such as JoJo Natson, Marcus Sherels and former Eagle DeAndre Carter. He also held Chicago and New Orleans to a grand total of 8 total return yards between them during the Eagles short playoff run, in which he punted 10 total times.
The regular season statistics and averages are where Johnston stands out in Eagles punting history. For an Eagles punter starting all 16 games in a regular season, Cameron Johnston sits at first place in average yards per punt at a booming 48.1 Y/P. This 48.1 Y/P also puts him at #3 in the NFL for the 2018 season, nestled in behind fellow Aussie Michael Dickson (48.2 Y/P) and Arizona's Andy Lee (48.6 Y/P). Lee is a 3x First-Team All-Pro and Pro Bowler, and Michael Dickson - described as one of 'the best punting prospects of all time' - was drafted 149th overall in 2018 and named an All-Rookie and NFC Pro-Bowler in his debut season. Johnston meanwhile received no awards for his outstanding 2018 season (probably because he doesn't drop kick on kickoffs), being beaten out by Thomas Morstead and Johnny Hekker for First and Second team All-Pro honors. To show how overlooked Johnston's season was, Morstead and Hekker averaged 46.4 and 46.3 Y/P respectively and did so on nearly 20 fewer punts than Johnston. But hey, Hekker scored a FG and an XP so guess we can't argue that that makes him an All-Pro by default. Johnston's bodyslam of Kamara was even overshadowed by Matt Bosher flooring former-Eagle Kenjon Barner in Week 16.
There's no way of knowing what the future holds for Cameron Johnston. He's under contract for 2019 at a $577,500 cap hit and undoubtedly will return at punter for Philadelphia next season, although a camp leg is likely to be signed just to keep him on his toes. Whether he can match his 2018 form is yet to be seen - he averaged 45 Y/P but trended upwards in his 4 years at Ohio State, so even an improvement on this year isn't out of the question. To outperform seasoned veterans like Johnny Hekker, Sam Koch, Brett Kern, and Thomas Morstead in your debut season whilst also averaging the highest Y/P average in Eagles punter history is no mean feat. His rapport with Jake Elliott and Rick Lovato is also a positive heading into next year, as having a solid ST unit is a crucial element in winning the tight games that Philadelphia has had its struggles with in the past. 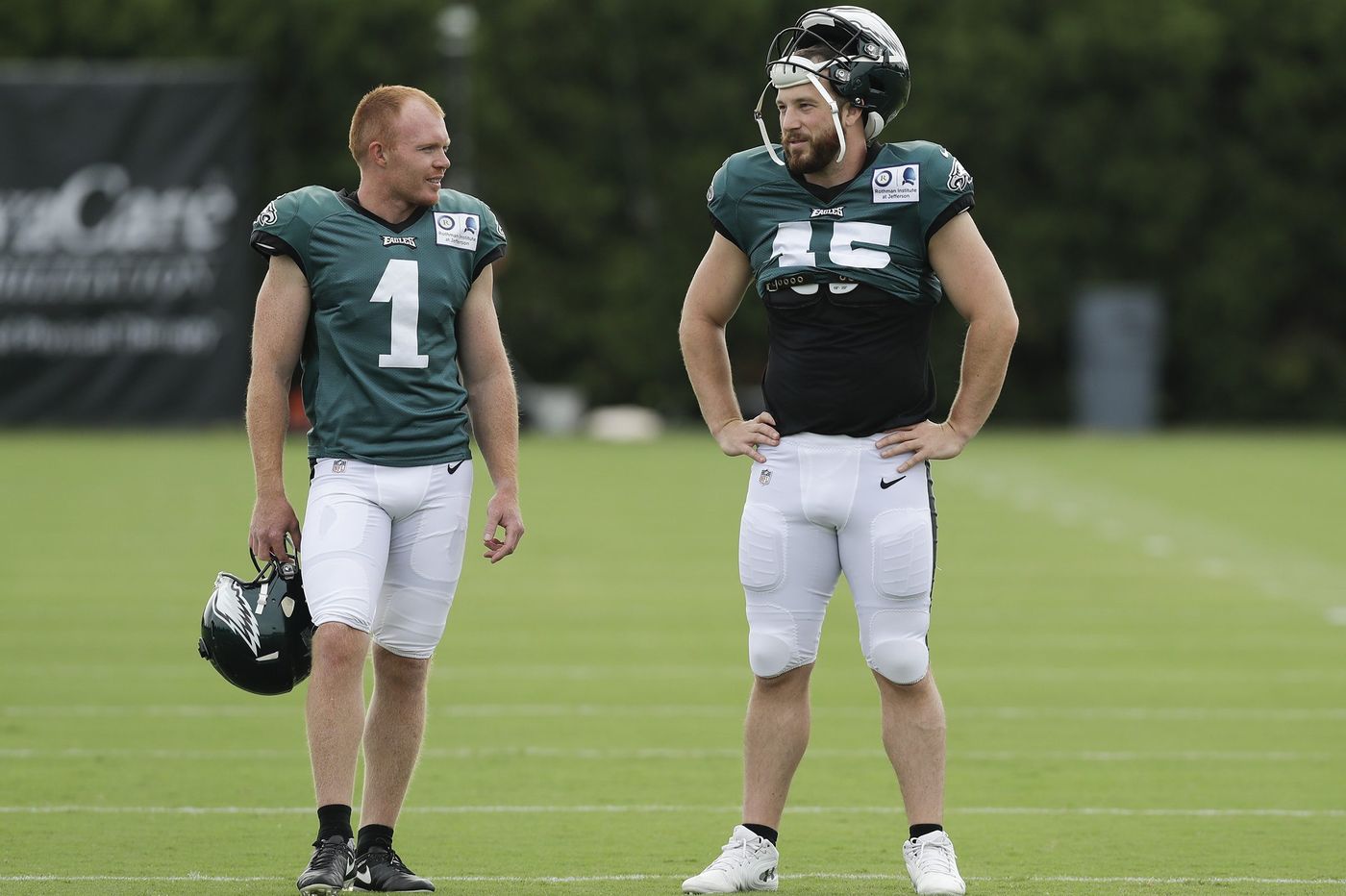 What we can know for certain is that Johnston's 2018 season will go down in Eagles history as one of the greatest ever by a Philadelphia punter, and he may turn out to truly be an Aussie diamond in the rough for this organization for years to come if he can sustain this incredible performance. All he needs now is a proper nickname to truly cement himself as a true Eagle.