[EDITOR'S NOTE: Promoted from the FanPosts.]

After last night's yooge victory over the previously 11-2 Los Angeles Rams to keep our 2018 playoff hopes alive, some of you may be in need of smelling salts this morning. Let me provide them.

WARNING: Parts of this article will be heavily based on statistics. Please cite the specific issues you have if you gripe about them in the comments.

Let me start with a premise that should be obvious to any real football fan (See: Box Score Reader, Not Just A). Carson Wentz is easily the more talented football player of the two. More arm talent. More mobility. Fewer bonehead plays that put the defense in bad spots. Nick Foles is unlikely to ever touch Carson Wentz statistically for an extended period of time. His 27 TD, 2 INT performance in his second season was much more about the league not yet knowing what the hell to do yet with Chip Kelly’s gimmicky tempo. When Wentz is under center, the Eagles are much more likely to get a performance worthy of an MVP candidate than you are one worthy of a backup. If you analyze the quarterbacks by Passer Rating over their career, which QB would you prefer: 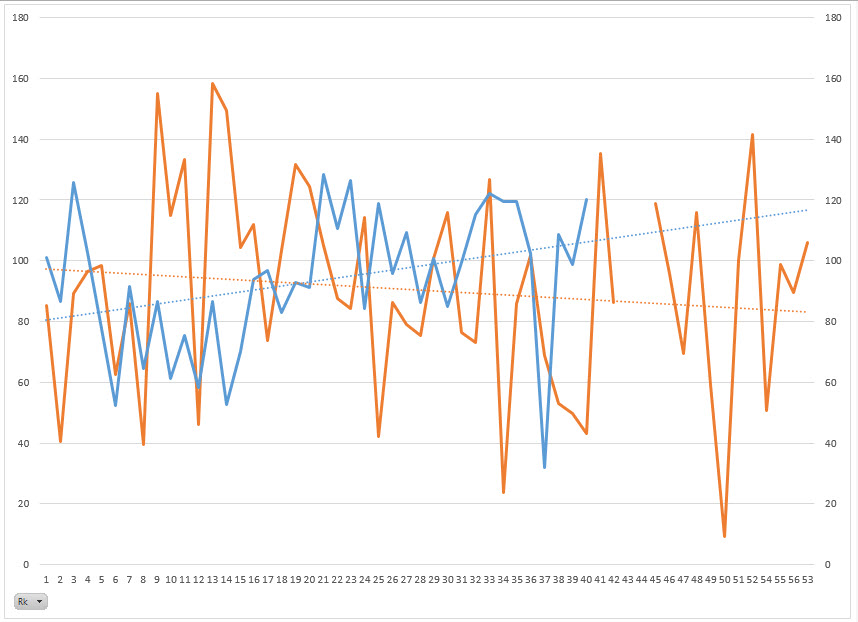 Which one would you want?

In the orange, you will see a VERY inconsistent player who’s rating is trending down in Nick Foles, thanks in large part to that MVP-caliber 2nd season. Conversely, the blue shows a lot less variance in the play of Carson Wentz and you see him trending up, thanks in part to that MVP-caliber 2nd season. You’ll also note that Nick Foles has 8 starts within +/- 20 Rating points of Carson Wentz’s worst career game…31.9 versus the Saints this year. His record over those 8 starts is 1-7, with the lone win an 18-12 game against Atlanta this year. Conversely, Foles has 5 starts that are higher than Wentz's best statistical game (128.3 against Arizona in 2017)...He's 5-0 in those games with the latest coming in the playoffs against Minnesota (the other four were all from #27-2).

To further this thought, we’ll note that Carson Wentz’s average QB Rating in losses is 84.1, compared to 100.2 in wins…a difference of only 16.1 points. Meanwhile, Nick Foles has an average passer rating of 65.4 in losses, compared to 104.4 in wins, a difference of an outcome-defining 39 points! What this tells you is that, when compared to Carson Wentz, Nick Foles is a much larger contributor to losses (19 points) than he is to wins (4 points). In the chart below, you will see that the difference, minimum, and maximum passer ratings for Carson Wentz have improved each season he's been in the pros. Meanwhile, Foles’ inconsistency shines through continually, with him actually being better in his lone loss (Tampa Bay) than in his two wins (Atlanta and LAR) this season. 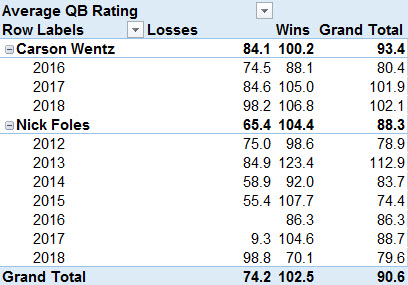 Average Passer Rating In Wins And Losses By Season

When comparing Wentz to Foles

What does this all this mean? In 2018, Carson Wentz throws the ball faster, presses the ball more aggressively (tight windows), purposefully and intentionally throws the ball deeper and closer to the sticks, and still completes a higher percentage of his passes. Now, due to this only being the 3rd start for Foles this year, it’s obviously an extremely small sample size which makes outliers much more impactful to the data. However, in listening to the descriptions of these two quarterbacks from some of Foles' biggest fans, the data flies in the face of what we feel like we see, doesn’t it? That’s because when we see players like Foles wind up and take a deep shot to a leaping Alshon Jeffery or throw an absolute dime to the back of the end zone for a TD to a UDFA RB Corey Clement in the Superbowl, it burns an image into your mind. It’s the same image we have of Tom Brady being an amazing downfield passer despite him being a completely horizontal game manager for most of his career (Look up his stats without a credible deep threat). Or maybe of Troy Aikman being this gunslinger when he was really just a game manager behind one of the best offensive lines with the all-time leading rusher in the backfield. Or of Brett Favre completely giving away games in the playoffs with his interceptions (6 of his 8 postseason losses, he was 1:1 or worse TD’s:INTs). These players make you feel like they’ve done more than they really did because of an insane amount of winning and/or memorable plays.

Lost in all of this #Analysizin is the play calling of Doug Pederson. The statistics above show that the difference between how fast they throw the ball is not that large…however, the full yard of Completed Air Yards is significant enough to show that the playcalling must be different. This thought is backed up by comments of Frank Reich and John DeFillipo before moving on to other jobs. This is likely due to the lack of athleticism of Foles. While Wentz would likely thrive in any system as he doesn't have any limiting factors, it’s been proven that Foles needs a specific set of circumstances to be successful...And Pederson provides this. Interestingly enough, in a year where a whopping 9 QBs with a minimum of 200 pass attempts have a rating over 100, Wentz would likely thrive even more if Pederson called the types of pass plays and with the same run:pass balance that he does with Foles. Having the entire playbook seems to make Doug’s playcalling worse than when he has to tailor a game plan to a limited quarterback.

Now, onto the best part...the extremely subjective, anecdotal intangibles. Both players are tremendous people off the field. I feel like we’ve been blessed to have both signal callers of the Philadelphia Eagles as wonderful role models. They’re both easy going (but not pushovers), soft spoken (but fiery competitors), charitable, family-oriented, God-fearing young men that any of us old heads would be proud to call our sons. However, that’s where the comparison of the two seems to stop. Carson Wentz seems like he is much more uptight on the field whereas Foles looks like one of the most loose QBs ever, regardless of the magnitude of the situation. When Wentz is down, he tends to be more aggressive (often to his detriment), like he’s trying to win the game in one play. Meanwhile, Foles continues to do what he does seemingly regardless of game situation. I think a lot of this is attributed to Foles being near retirement before last season and coming back to win the Superbowl. Though he was very cool on the field before, his "playing with House money" attitude is definitely ratcheted up to the maximum now. Meanwhile, it felt like this year to Wentz was about proving that he would have won Superbowl LII, too. This is unnecessary and leads to extra, self-created pressure.

Now, onto my headline HAWT TAKE statement. Carson Wentz is the better QB prospect of the two QBs and, in my humble opinion, offers us the best chance at another Superbowl victory over the next decade. However, if #FolesMagic strikes twice and he somehow reverses course on this disaster of a season to win a second Superbowl, we should extend Foles and trade Wentz immediately. Analytics people often get lost in situations like these because they include emotional components. The reason why this is even a discussion is because the team just seems to play better with Foles on the field. "He just wins". And since, in this amazingly hyperbolic situation, this would be a 2nd straight pro system ended in injury for Wentz and a 2nd straight Superbowl win for Foles, you’d have no choice but to take the known quantity. We will never know if Wentz would’ve won Superbowl LII…but we know Foles did. And not only did he win it, he was the MVP of it. It’s economically impossible to keep them both quarterbacks going forward. So, you bite the bullet and trade Wentz to the highest non-Patriots AFC bidder and you use the minimum 2 first round picks Howie would get in return, plus the lack of a 30 million dollar per season extension for Wentz, to put the best team around Foles. Maybe you’d win another 1, 2, 3, 4…okay, that didn’t work for LeBron…more or maybe you’d never win a third one…but playing from a position of FOMO is not a winning strategy.

A Lombardi in the hand is worth 2 in the bush.

Now…excoriate me in the comments. Tell me why you agree or disagree. However, make sure you bring your A-game…because you know I’ll bring mine. :) If you somehow made it this far, I hope you enjoyed the read.