Good morning fellow Eagles fans. Last week I posted a detailed breakdown of why I think Jeffery Simmons, a DT out of Miss. State would be an ideal first round draft choice in 2019. The post garnered some positive feedback, so here I am discussing day 2 of the coming draft, where we have two 2nd round picks (sans the 3rd we sent to Detroit for Golden Tate). Below are some realistic options for us to think about moving forward as a lot of the core pieces of our team get older. I will address three major needs, and three day 2 options that fit those needs.

What are our needs? - OT

Like anybody else, I'm cautiously optimistic about the growth and future potential of Jordan Mailata. He may be a 7th round converted rugby player, but even our own HoF candidate Jason Peters was an undrafted converted tight end. That said, football is a game where putting all your eggs in one basket can backfire and doom a franchise for nearly a decade (*cough* Giants *cough*). Offensive tackle is a clear need for this Eagles teem going forward, and luckily 2019 is full of O-Line talent, it just happens to be outside of the first round. 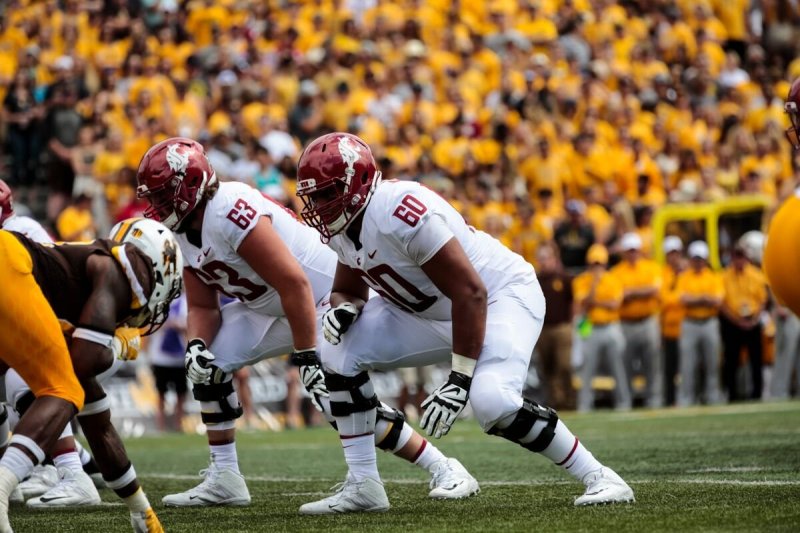 With Trey Adams likely out for the rest of the season (and possibly returning to Washington for another year), and Greg Little getting absolutely manhandled this season, the outlook on offensive tackles has changed drastically. My original 1st round pick Jonah Williams will probably be the first tackle off the board, with Little and Yodny Cajuste likely to follow. This leaves a slew of good but not great tackles to choose from on day 2. Andre Dillard out of Wash. State is not the best pick, but he is the safest pick in my mind. Dillard has been a not astounding, but reliable force for the Cougars. Described as "quick on his feet", Dillard is adept against speed rushers on the edge, adequate against power rushers, and has the athleticism to get off his blocks and make way into the second level with relative ease. 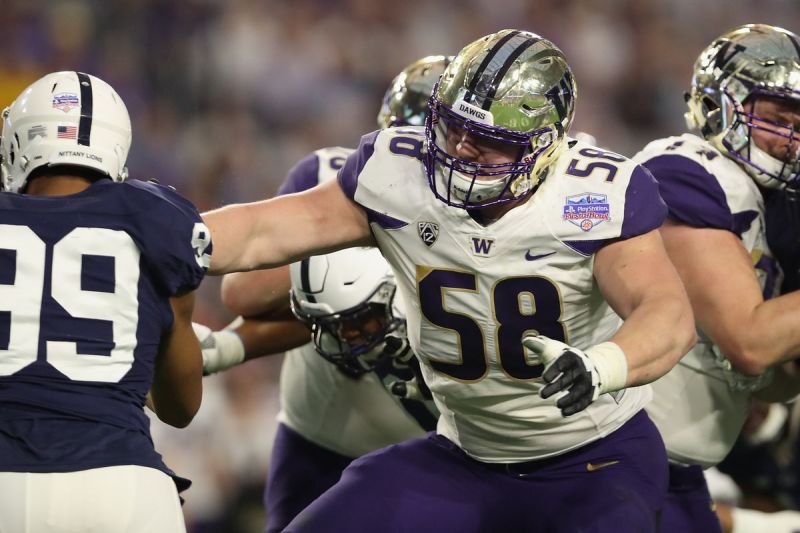 Like I said before, with Trey Adams out, Washington has had to rely on other starting tackle Kaleb McGary in a big way, and he has stepped up for the Huskies. Still playing RT, McGary who was originally sold as a good run blocker and bad pass blocker, has improved his pass protection exponentially, and run blocking even more so. McGary's combination of size, speed, and pro-style experience will make him an ideal candidate for teams in need of O-Line talent. 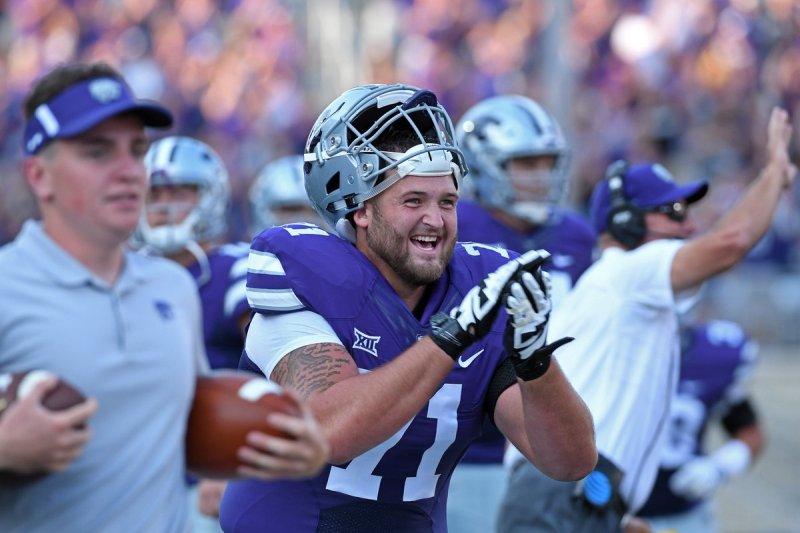 His team may be the laughing stock of the Big 12 conference, but Dalton Risner is one of the lone bright spots on an otherwise putrid Kansas State club. If Aussie rugby legend Jordan Mailata happens to work out, and develop into our starting left tackle of the future, Risner is the ideal pick for that scenario. Projected by scouts to move inside from tackle to either guard or center, he has experience across the offensive line and can be a valuable asset to any team in need of depth at multiple positions. Risner has a tendency to struggle against speed rushers, as displayed earlier this season against Miss. State's Montez Sweat -- but bince then, he's played well at right tackle for the Wildcats.

What are our needs? - Safety

Going into the 2017 season, the Eagles boasted one of the best safety tandems in the NFL between Malcolm Jenkins and Rodney McLeod (don't forget Corey Graham). One year later, the secondary's weaknesses have been exposed by the league, and McLeod is now out for the remainder of the season. Not to mention, he wasn't entirely playing up to his contract in the first place. Couple this with aging vet Corey Graham sidelined with injury issues of his own, and pro-bowler Malcolm Jenkins on the wrong side of 30, the Eagles will soon be in need of safety talent. Avonte Maddox has done well at free safety in the absence of others (given that he's never played the position before) but the hope is that he can end up playing his natural position at corner in the future. 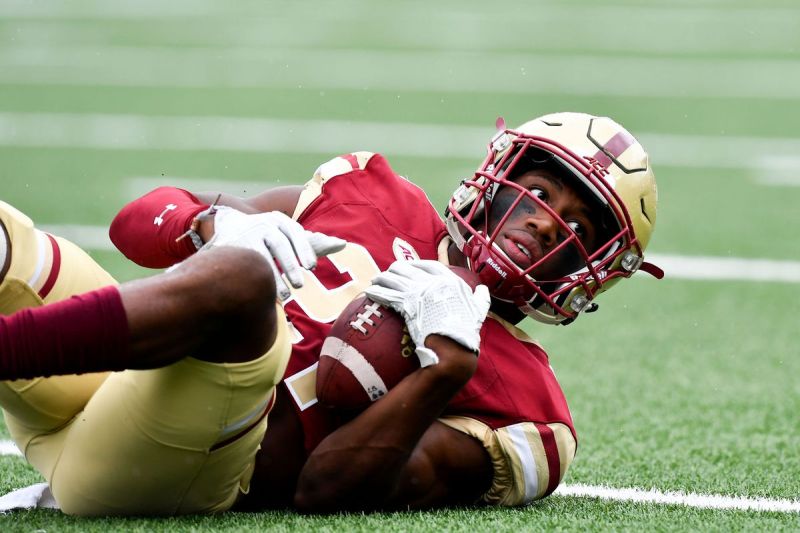 Despite playing for a team called the Eagles (*cough*), Lukas Denis certainly plays more like a hawk...a ballhawk that is. In 2017, Denis led all of college football in interceptions with 7, and was top ten in passes defensed with 10. Given his play over the past 3 seasons for Boston College, Denis would in any other scenario be projected as a first round pick, if not for him being undersized, and the 2019 draft being absolutely loaded with safety talent. Denis would fit perfectly in the Eagles system as McLeod's replacement, given his sneaky speed, and ability to play singly high and range sideline-to-sideline. He will need to gain weight for the NFL though. 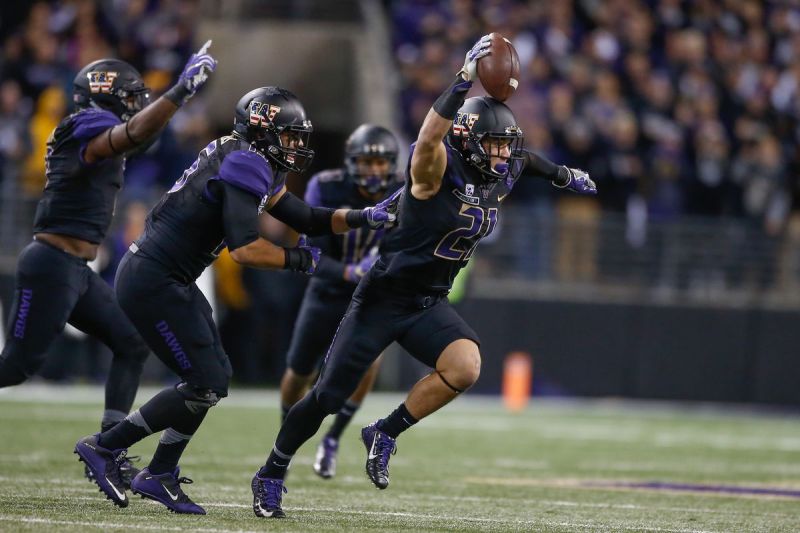 It's no secret that the Washington football program is good at producing corners and safeties. A quick foray into the past few drafts brings up 5 Husky secondary defenders drafted in the first 2 rounds since 2014. This includes names such as Desmond Trufant, Marcus Peters, Kevin King, Budda Baker, and our very own Sidney Jones. Heck, even in this draft, Washington's OTHER safety JoJo McIntosh is projected to be drafted between the 3rd and 4th rounds. That said, Taylor Rapp is clearly the star of the Washington secondary. Already blessed with ideal size and speed for an NFL safety, Rapp produced 59 tackles, 2 sacks, and 1 interception in 2017 playing next to Budda Baker. Unlike Denis, Rapp plays strong safety and could be drafted as the heir-apparent to Malcolm Jenkins. 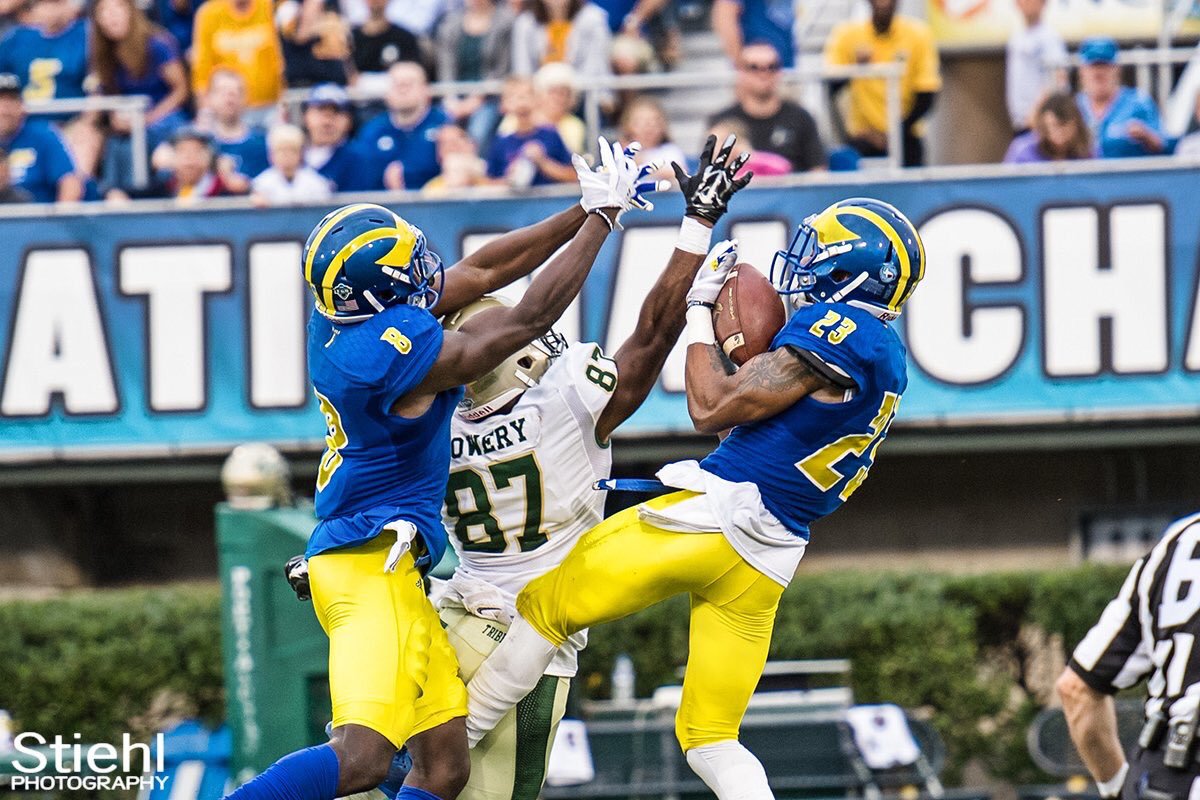 Taking risks on small school products is nothing new for the Eagles organization; they gambled in 2012 with Vinny Curry, in 2016 with Carson Wentz, and recently in 2018 with Dallas Goedert. In 2019, Adderley could be that serendipitous pick that befalls one lucky team. Adderley was put on the map with a breakout year in 2017 where he logged 78 tackles, 5 interceptions, 2 forced fumbles, and 3 pass break ups. Adderley plays with speed and aggressiveness at both safety positions for the Blue Hens, and has also earned special teams honors by returning a kickoff for 92 yards for a TD. Did I mention Adderley is also a local kid who went to Great Valley HS in Malvern? You know how much Howie loves local guys.

What are our needs? - DE

For our third need there was a lot of ways I could go. Hell, we need depth at most positions. I decided to go with DE, not only because this draft is loaded with edge talent, but also because we may be without Brandon Graham and Chris Long come the start of next season. Add that to the injuries we've had across the line, and the lack of depth issues -- for this team to maintain it's defensive identity, it will be important to keep adding pass rushers. 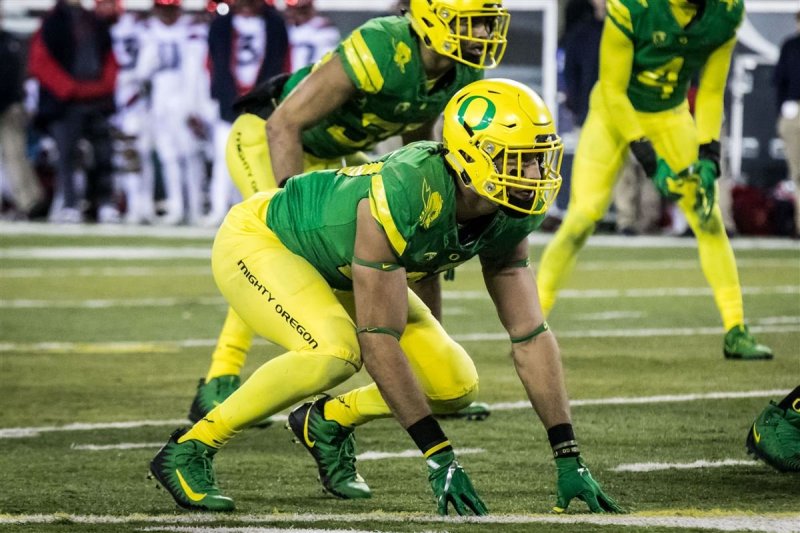 There's a chance a player like Jelks doesn't last until the 2nd round. he's slid a bit in draft stock due to having a down year, but his bend and pure athletic ability are undeniable. Slightly undersized for a 4-3 DE, Jelks projects more like a 3-4 EDGE rusher, but like Chris Long and Josh Sweat, he can easily add a little weight and through technique and speed become a dangerous situational pass rusher. So far this season, Jelks has 44 tackles, 6 tackles for loss, 3.5 sacks, and 1 pass defended. What rocketed him into first round contention was his breakout numbers from last year, where he logged 59 tackles, 15.5 tackles for loss, 7 sacks, and 7 passes defended. If you were vying for someone like Harold Landry, Arden Key, or Dorance Armstrong Jr. in 2018, Jalen Jelks is your man for 2019. 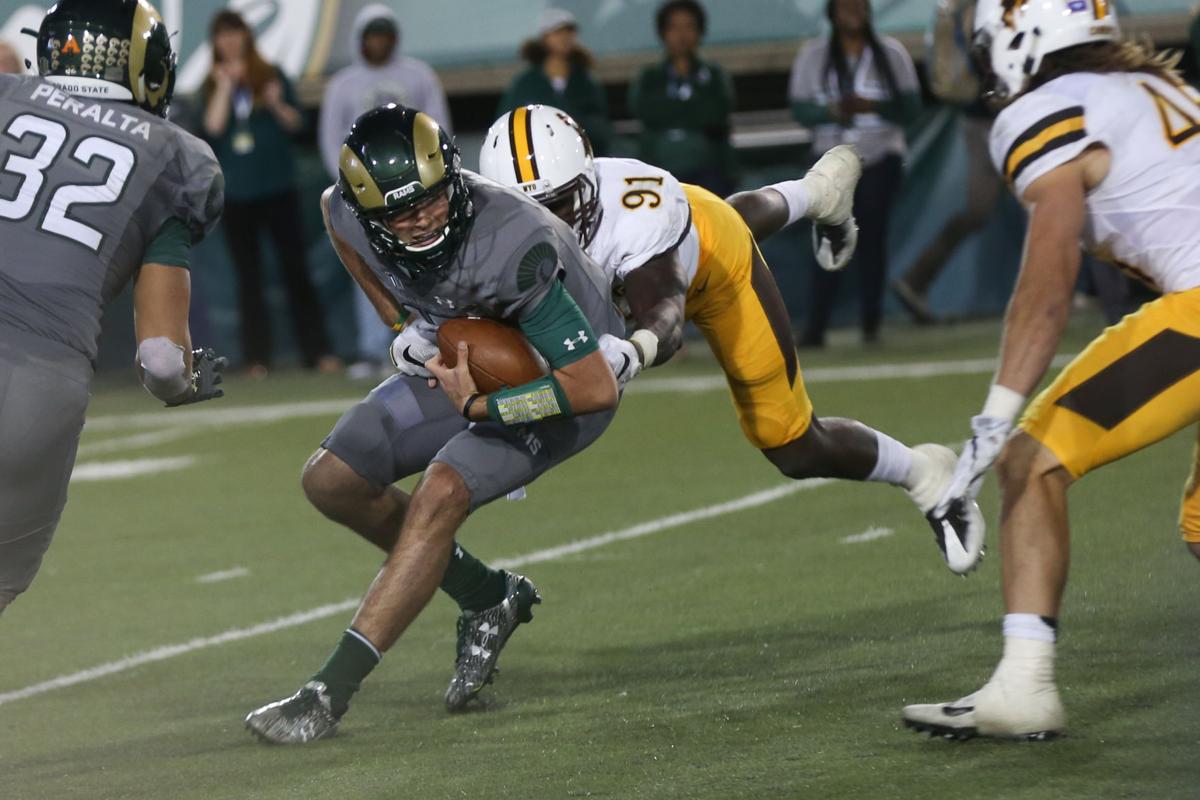 When you have a player like Jalen Jelks, who is the human embodiment of "athletic freak", Carl Granderson is certainly the embodiment of technical genius.Very similar in that respite to our very own Derek Barnett, Granderson is described by scouts as a "technically sound rusher that lacks in the athleticism department, but has a high motor, and will continue to make plays well beyond expectation." He is also surprising in space, and has 3 interceptions to his name over the past 2 seasons. As a 4-year starter with no redshirt seasons, Granderson's playtime experience will be desirable to clubs looking for an immediate NFL starter. 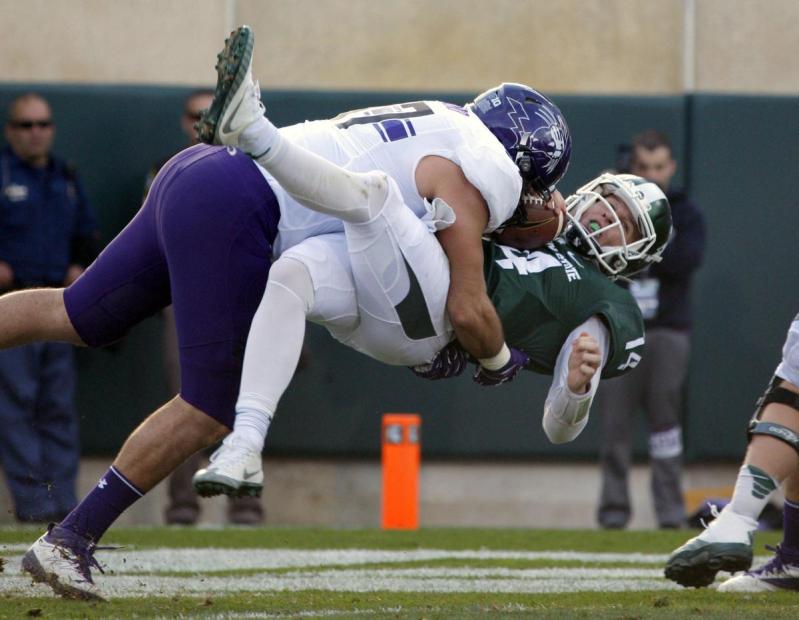 When we move past freakishly athletic, and super technical pass rushers, what we're left with is pure power. Joe Gaziano is a monster defensive end for the Northwestern Wildcats, who led the Big 10 in both sacks and tackles for loss last season. So far this season he has 28 tackles, 8.5 tackles for loss, 4.5 sacks, and 1 pass defended. Scouts say that he needs to improve his run defense, and get faster at getting to the quarterback. He will overpower linemen and create pressure, but a lot of sacks have come from continued coverage.

Hope everyone enjoyed this draft evaluation by yours truly, if you have any players you're infatuated with, feel free to comment them below! I'll try and do a round 4 post next week perhaps.