Right now, the Philadelphia Eagles are light at cornerback. If the season started today, they would have six guys on the roster. Jalen Mills probably starts, hopefully on the outside where he can get more safety and sideline help. Ron Brooks likely plays the slot again, which should keep Malcolm Jenkins at safety, which is clearly his best position. Newcomer Patrick Robinson could play either inside or outside, but could also get cut after training camp (my bet is he earns starter's snaps between slot and outside). Then, they've got two younger guys, Aaron Grymes and CJ Smith to go along with Dwayne Gratz. I don't expect much from Gratz, who was recently forced out of Jacksonville, not exactly an NFL juggernaut.

Both Smith and Grymes flashed some talent last preseason, and either one could turn into a solid contributor this year. Grymes had a year to adjust to NFL conditioning and talent after some time in the CFL. Smith also needed some adjustment time, coming from NDSU. While it would be awesome to see one, if not both of those guys turn into legit NFL contributors, it would be foolish to count on such a player development miracle (though keep in mind first team all-pro CB Chris Harris Jr. went undrafted out of Kansas).

What to Look For

So, let me hit you with some knowledge. The Eagles are going to draft a corner this year. To be more precise, they will likely draft two or three, with one possibly being a safety/corner hybrid. I am a firm believer in the idea that teams should draft for what their roster will probably look like two years from now, but this year, it's a case of bodies. The Eagles don't have enough NFL-quality players at corner to play a game this year, let alone thinking about two years from now.

Luckily, this year's cornerback class is lauded for it's depth. There are tons of really talented guys to pick from. So the question becomes: who should we take? The answer should, in large part, depend on the more important question: what do we want in our corners? What do the Eagles want out of their cornerbacks? Are we looking for zone guys, press guys, or man guys (guys who play close at the line but don't press with their arms)? Do we want big, physical guys or smaller, more agile ones? Guys who gamble or guys who keep everything in front of them? Can we avoid the paralysis of excessive choice?

I think I have some ideas about how to answer what the Eagles are looking for in a corner, but short of interviewing Jim Schwartz, my ideas probably don't count for much. And unfortunately, I do not have direct access, or even press credentials, so do not expect any insider info to get revealed here.

Another option is to sift through old soundbites and quotes from Schwartz, Howie Roseman, and Joe Douglas and try to piece together what they want based on what they said they want. This method is obviously flawed, as they may be purposefully misleading in order to throw other teams off the scent, or purposefully vague because they haven't had those conversations yet. During this f***ed up time of year, I find it hard to trust everything that gets reported. Agents leak stories, general managers leak stories, and teams host fake player meetings so as to not reveal their true intentions.

Now what? I'm not interviewing the defensive coach. I can't trust the quotes and tweets. How can we figure out what kind of players the Eagles want at the cornerback position. I decided to look at what Schwartz used in the past. I planned to look at the top three corners by snap count from every year he was a defensive coordinator or head coach, including last year in Philly. I was going to look at measurables and film, to get a feel for types of players and types of playing style. Unfortunately, neither snap counts nor All-22 footage go back that far (2001 for Schwartz’s first year as Tennessee DC). Instead, I settled on looking at Schwartz corners from 2011-2016, as 2011 is the first year that NFL.com has coaches footage available online. 2011 was Schwartz’s third year as the Lions' head coach, the year he took them to the playoffs.

So first, let me apologize for what feels like a slightly incomplete analysis. I would have done more, but getting accurate combine numbers and game footage from that far back proved slightly difficult. And now, without further preamble, let’s take a look at the types of corners Schwartz has used in the past.

Most of the data in the chart below came from either combine or pro day results as reported on nfldraftscout.com. Corey Graham was nursing an ankle injury, so he didn’t work out during the pre-draft process. 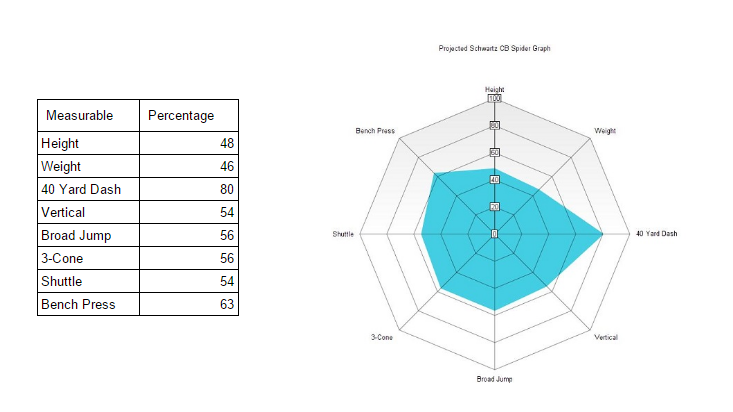 What does all this data reveal about Schwartz and his corners? In all honesty, not much. In terms of measurables, he seems perfectly OK with average athletes, with the exceptions being a slight inclination toward strength, and a greater inclination toward long speed. He also seems comfortable playing corners who are on the smaller side.

Aside from strength and speed, these guys share some common traits as well. Looking through the old scouting reports I could find online, Wright, Houston, Mathis, Slay, Gilmore, Graham, McKelvin, and Mills were all known for confidence and ball skills coming out, making 8 out of 12. In addition, Berry, Houston, Lacey, Green, Mathis, Slay, Gilmore, and McKelvin were all noted as being aggressive and tough in run support, making another 8 out of 12. So traits Schwartz seems to value include ball skills and run support, though, if we are being honest, so does every other defensive coordinator.

At this point, I felt like I understood what Schwartz valued in prospects, but I still wanted to know exactly what kind of scheme fit he might be looking for. For that, a little film study was needed. Unfortunately, it was not possible to watch every game from 2011-2016. I do not have a time machine, nor the ability to extend the hours in the day. Instead, I decided to watch three games from each season. I tried to pick one game at random from the beginning of the year, the middle, and the end. For the Eagles season, I deliberately picked three games in which the defense was successful in holding the other team to under twenty points.

For this part of the CB study, I charted what kind of coverage the corners showed on every play. I did not count plays for safeties who walked down into coverage, but I did count plays where safeties lined up a sub-package corner. On running plays, if the coverage was obvious, I marked it. If it was difficult to tell, I threw the play away. Again, sorry for the slightly incomplete analysis, but here are the results from my small random sample.

The first thing that stands out about this data is that Schwartz calls a variety of coverage looks. This gives me more confidence in him as a DC because he shows a willingness to mix coverages based on the opposing team and the situation. He definitely showed a tendency to play more press and man on the QB’s strong side (right side) and more off on the weak side. It is also worth noting that in all 15 games I watched, Schwartz called 12 CB blitzes, all executed by the nickel corner.

The other important trend to notice in this data is that every year, Schwartz has shown more of a tendency to go with press and man coverage. At first, I thought this might be an attempt to take advantage of talent on hand. With a little more thought, I suspect that the shift in coverage is a reaction to a league-wide shift toward the shorter passing game, particularly against the Wide-9. The purpose of the Wide-9 is to get quick pressure on the quarterback. When teams used route concepts that took longer to develop, zone and off coverage were sufficient until the pass rush got home. Over the past few years, teams have begun to beat the Wide-9 by using more three-step drops, getting the ball out of the QB’s hands before the pass rush arrives. I think Schwartz may be attempting to counter this trend by using more press and man coverage in order to disrupt routes and buy his pass rush a little extra time.

Looking at the Prospects

What does it all mean for the Eagles draft this year? With the Eagles splitting their coverage drops between zone/off and press/man, they will probably be looking for versatile corners who can fit both schemes. When we factor in guys who match up in the athletic testing, and who match some of the past scouting reports this is what we get: fast, strong corner with good ball skills who tackles well and is scheme versatile. So… we get a prototypical corner who every DC wants. Maybe a more nuanced look is in order.

I’m not sure that size will matter as much for the Eagles this year as it did under Kelly. Schwartz has shown in the past that he is comfortable with smaller corners. We are also probably looking for guys who are aggressive, both in run support and playing the ball. This not only matches past scouting reports, but also quotes from Jim Schwartz. Scheme wise, I think we are looking for man/press guys who are comfortable in zone as well.

For this last section, I have to start with a disclaimer that I have not watched tons of game tape on every guy listed below. Most of this section is based on scouting reports from NFL.com, which were written by Lance Zierlein. So if you want to argue with scouting reports, argue with him.

Probably Not the Guy

Probably Being Considered (bold prospects are ones I think are more likely to be highly rated by current Eagles staff).

Keep in mind, this is all an educated guessing game. I am trying to use historical evidence to figure out which corners in this loaded class may interest the Eagles. There are definitely some good players who I think they won’t consider, but may end up with good careers depending on where they land. The guy I will bang the table for all day long is Jourdan Lewis, who has the cover skills and attitude to be a perfect fit for Schwartz. For you fans of the spider graph, the closest fit to past Schwartz corners is Adoree Jackson, who also fits some of the attitude and ball skill requirements.

Obviously, we all have to wait until the draft to see which corners the Eagles take. With this article, I tried to look at guys who might fit with what Jim Schwartz values. Let me know what you think in the comments section.