The Falcons are one of the more intriguing teams in the league to me. They have a player who can easily be a top 10 quarterback and a receiver who is one of the best around when healthy. They started hot and then collapsed down the stretch, complimenting a 6-1 start with a 2-7 finish, including four losses by a field goal or less and six losses by a touchdown or less. They don't need a ton of pieces to compete but the ones they need, they need badly. When I got this pick, I narrowed down four things that the Falcons definitely should target:

A lineman to help protect Matt Ryan from repeatedly dying for Atlanta's sins or,

A wide receiver to provide insurance in case Julio Jones suffers another injury.

Watching four offensive tackles go in the first 16 picks eliminated the chances of taking any line help at 17 and I wasn't sold on going wideout here, since I believe the Falcons can get a good talent to put as their, at best, #5 receiving option (behind, at least, Jones, Sanu, Tamme and Freeman, and possibly behind Weems and Toilio) in the 2nd or 3rd. So with that, I narrowed it down to the defensive side of the ball. Eventually, I came up with two possible picks. Darron Lee, out of Ohio State or Jaylon Smith, out of Notre Dame. I went with Lee for two reasons. The first is because he is a superior pass rusher, which helps kill two dirty birds with one stone and frees up the Falcons picks later to go BPA if they wish instead of addressing another need. The second is because of Smith's injury. I fully believe Smith can overcome his injury and be a quality NFL player, but I don't think he comes back this year and that would be wasting at least one more year of Ryan's prime. When you have a QB like Matt Ryan or say, Philip Rivers, you take the pick that you think has the highest combined value of potential and current skill, as well as helping to meet your needs, and Lee meets that apex for the Falcons.

Darron Lee is a talented jack-of-all trades type of player with elite athleticism. He runs a sub 4.5 40, a 35.5 inch Vert, a 4.20 shuttle time and a 133 inch broad jump, all of which were among the best results for OLB in Indy.

And at Ohio State, he did just about everything on that defense. He worked as a pass rusher with 11 career sacks, as a run defender with 27 tackles for loss and 146 tackles overall, and as a cover man with three picks, usually working against slot receivers. The ability to cover in particular would be another great addition for the Falcons for a team that repeatedly got shredded over the middle and in the short passing game. He's also able to easily play in any defensive set. Here are some of Lee's best plays, which show his nose for the ball and ability to close down a play quickly, no matter if it is a run or a pass.

The only two knocks against Lee are his bulk and his experience. He's already shown he can add muscle though. Coming into Ohio State, he was a slender 195 pound QB and since then has added almost 40 pounds and become one of the best players on a defense that boasts Joey Bosa and Eli Apple. 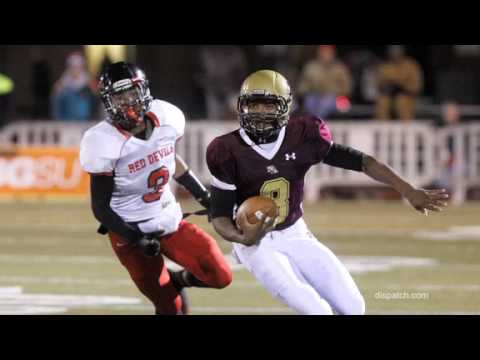 And he's only a redshirt Sophomore. Give him a few years in the league with NFL level conditioning programs (and non-college food) and he could easily add even more muscle to his frame to become a powerful beast at the position.

And experience is something that will come in time.In Atlanta, Lee would be playing under a defensive teacher in Dan Quinn, and on a team that doesn't require him to do everything Day 1 if he isn't ready, especially with new signee Courtney Upshaw ready to handle the run in his stead. In this environment, he should be able to cut down on stupid mistakes and continue to improve his already high level of skills to become a Pro Bowl caliber linebacker

If the Falcons get on the clock and Darron Lee is still on the board, they absolutely should take him. He fills out their weak pass rush, gives them another asset in an unsatisfying linebacking corp and adds a speedy coverage linebacker to help them slow down the short and middle passing game. Under the hands of Dan Quinn, Lee should grow into one of the best picks from this draft that ultimately helps turn the Falcons from a team that has given up 17 fourth quarter leads since 2011 into a team that can control both sides of the ball. He's proven his skill in both workouts and on the field. And with that, the Colts are on the clock. Happy drafting.