LeSean McCoy is hosting a "Females Only" party in Philadelphia

Share All sharing options for: LeSean McCoy is hosting a "Females Only" party in Philadelphia

Are you a female who is 21 years or older? If so, you're eligible to attend the ... secretive ... party being thrown in Philadelphia by former Eagles and current Buffalo Bills running back LeSean McCoy. Here's a screenshot of the full poster, which McCoy originally posted on Instagram but has since taken down. Via Crossing Broad: 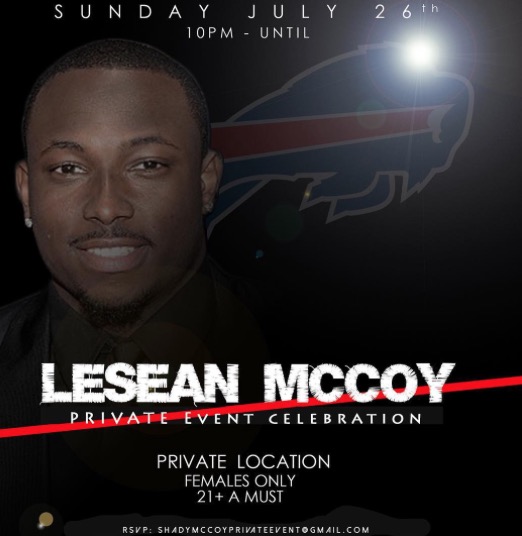 Here's the response you get when you RSVP to the address at the bottom of the poster:

This is what happens when you try to RSVP for LeSean McCoy's "females only" private event in Philly: pic.twitter.com/58zQIXqdwQ

McCoy had to take the poster down since the Bills' official logo was used. Something tells me they didn't exactly want their logo associated with a party like this.

Bills spokesperson: "We have reached out to LeSean and informed him that players are not permitted to use team marks for personal use ..."

"... without prior permission from the team."

Females only. Confidentially agreement. Sounds like it should be an, uh, interesting time.

In more current Eagles running back news, DeMarco Murray paid for a couple's dinner the other night.