[Editor's note: Before we get to the explanation, note that Strong has denied a recent report that he needs surgery on his wrist.]

The Eagles biggest needs heading into the draft are WR, OL, QB, S, and CB. Unless a move for Mariota is made on draft day, or he somehow falls all the way to 20, the Eagles most likely will not be picking a quarterback. For offensive line, currently the Eagles have bigger needs, and they should be able to find someone later in the draft unless a top OT falls to them, which is unlikely. Last year after the draft they said they weren’t going to reach for an OL, so I doubt they’ll do it this year. Safety is currently a huge need. However, there aren’t many choices in the first round. Even if Landon Collins falls to 20, the Eagles might see him as being not a scheme fit. This leaves us with the two most likely options being CB and WR. Lucky for the Eagles, both positions have deep draft classes this year.

The Eagles made a splash in Free Agency signing Byron Maxwell, locking up one starting CB slot. Also signed in the offseason was Walter Thurmond, who along with Brandon Boykin, Nolan Carroll, and Jaylen Watkins will compete for playing time in the rest of the secondary. If the Eagles do go CB in the first round, they have been connected to a few during pre-draft visits: Jalen Collins, Kevin Johnson, Byron Jones, and Eric Rowe.

One of the most disappointing parts of Free Agency this year was when the Eagles lost Jeremy Maclin. For the second straight year the Eagles find themselves without their leading receiver from the previous season. Right now the Eagles have 8 WRs on their roster: Jordan Matthews, Josh Huff, Miles Austin, Riley Cooper, Jeff Maehl (ERFA), Will Murphy, Quron Pratt, and Seyi Ajirotutu. Outside of Matthews, Cooper, and Huff, with the exception of recently signed Austin, the rest are mainly special teams or practice squad players. This doesn’t exactly make Eagles fans feel safe about the WR core moving into next season.

The Eagles have met with a few WR draft prospects including Breshard Perriman, Jaelen Strong, and Nelson Agholor. Out of those three, Jaelen Strong is, in my opinion, the best. Perriman is fast, running an unofficial 4.22 40-yard dash at his pro-day, and due to that, has been rising up draft boards. However, Perriman had a concerning 14% drop rate last year. Agholor is smaller than Strong and brings some special teams experience, but he is more likely a 2nd round target if the Eagles decide to draft another position in the first.

Note: It’s worth mentioning that one of his top comparisons is Miles Austin, who the Eagles brought in on a one-year deal for 2015.

Jaelen Strong measures in at 6’2" 217 lbs. A little shorter and smaller hands than Jordan Matthews, but quicker, 4.44 40-yard dash, and can jump higher, 42" vertical, which was 2nd best at the combine behind Chris Conley. A high school basketball player, whose dad played college basketball at Drexel, Strong is known to go up and grab the ball at the peak of his jump. He struggles on short, and comeback routes, but one on one and down the field he jumps up and snatches the ball out the air. This was clearly on display versus USC for what has become known as the "Jael Mary"

If Jordan Matthews remains in the slot most of the time, Strong will give the Eagles a big target down the field and in the redzone that can go up and make a play on the ball. 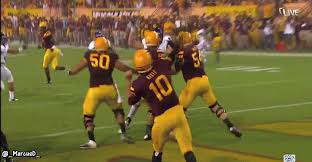 Byron Jones, CB UCONN – Jones has recently been skyrocketing up some boards after his impressive combine. The Eagles sent a large group up UCONN’s Pro-Day including Chip Kelly. If the Eagles go CB at 20, the perception is it will most likely be for Jones. Jones is a freak athlete, which seems to be theme for players Chip is interested in, and would fit what the Eagles look for in a CB. But Eagles can always draft him in the second round!

Arik Armstead, DE Oregon – Like Jones, Armstead is a freak athlete. Currently the Eagles are stacked at DE, but with Cedric Thornton currently on a one year contract, it wouldn’t be too much of stretch to see the Eagles selecting Arik. Plus, Oregon Bias.

Jake Fisher OT, Oregon – Hasn’t been linked to the Eagles, at least not yet, except the fact that he plays OL and went to Oregon. I see him more likely an early-mid 2nd round pick.

Breakdown of Routes by Bolts from the Blue