The Philadelphia Eagles defeated the Jacksonville Jaguars at Lincoln Financial Field on Sunday, 34-17. The Eagles moved to 1-0 on the 2014 NFL Season. It was a sloppy start but the Eagles managed to score 34 unanswered points to win. Read on for a drive-by-drive recap of the game. Up next for Philadelphia is trip to Indianapolis to face the Colts on Monday Night Football.

Eagles win the opening toss but defer to receive. Opening kickoff goes for a touchback via rookie kicker Cody Parkey.

Three-and-out. Philadelphia comes up big with a stop on 3rd and 1.

The Jaguars take over with good field position and capitalize. Chad Henne play-action pass to Allen Hurns 34-yards goes for a touchdown over the top of the defense. Well, then. Jaguars take the lead.

Eagles fumble the ball AGAIN. Foles fumbles for the second straight drive and the Jaguars take over with good field position. Foles had Jeremy Maclin wide open down the field but he held onto the ball for too long.

Jacksonville takes over with good field position and makes the most of it. Another touchdown for rookie wide receiver Hurns.

Foles misses an open Jordan Matthews down the field by throwing behind him. Still holding onto the ball for too long. Eagles have to punt.

Brandon Graham sack pushes the Jaguars back before a Nate Allen strip-sack on the next play forces Jacksonville to punt. Really impressive play by Allen. That's his fourth career sack.

Foles completes a pass for a first down! That's new. Then the Eagles have to punt. Again.

Philadelphia pins Jacksonville deep in their own territory thanks to a great punt from Donnie Jones that was downed by Brandon Boykin. It doesn't matter though because the Jaguars hit a big gain on the first play of the drive.

Jacksonville moves into field goal range and kicker Josh Scobee drills a field goal from 49 yards out. Credit to Connor Barwin for forcing the fourth down via a batted pass. Barwin had 7 of those in 2013.

Eagles three and out. Foles is just missing wide open receivers and looking terrible. The protection hasn't been good at all either.

Scobee's kick is wide-left after the Eagles force a stop.

Jordan Matthews 30-yard catch is the biggest play of the day. Life! Or not. Foles throws an interception in the end-zone. Awful, awful throw. I don't even know what to say. This is WORSE than the first Eagles-Cowboys game last season.

Evan Mathis has to be helped off of the field. Not looking good. Andrew Gardner replaces Mathis at left guard. Eagles drive down the field a bit but not before having to punt. It looked like Jeremy Maclin was interfered with on a deep pass in the end-zone but no call.

Jaguars played it conservative, ran some clock, and punted.

The Eagles tried for a hail mary but it was unsuccessful.

Foles missed Maclin wide-open and then threw behind Jordan Matthews to start the drive. Darren Sproles saved the day by running 49 yards for a touchdown on 4th and 1. Life! That's Sproles' longest run of his career, by the way.

Eagles forced the Jaguars to punt. The Jaguars are now 0-7 on third down at this point. That's obviously an area where the Eagles struggled in 2013.

Foles misses a wide open Brent Celek for a would-be touchdown and checks down instead. Next play, Foles finds Ertz over the middle of the field for a touchdown. That's better.

Another three-and-out for the Jaguars. 0-8 on third down. How about this Eagles defense?

Eagles have to punt after a Foles pass goes through Riley Cooper's hands on 3rd and 8. Cooper should have had that one.

Jaguars 0-9 on third down. Incredible.

Foles misses Maclin wide open down the field on the same play he missed Maclin earlier in the quarter but completes a pass to Cooper anyway. Eagles end up having to punt.

Jaguars finally convert a third down, but it's short-lived as Jacksonville is forced to punt after Barwin bats a Henne pass down.

Eagles drive into scoring position. 51-yard attempt for Cody Parkey. Lots of pressure, and he makes it! Wow. Tie game.

Earl Wolff subbing in for Nate Allen, appears to be non-injury related. Jenkins forces a fumble on Hurns but it's ruled an incomplete pass. Close. Jaguars end up having to punt.

First play of the drive... Foles finds a WIDE OPEN Maclin down the field for a deep touchdown. Wow. 68-yards. Eagles lead for the first time, and that's 24 unanswered points. 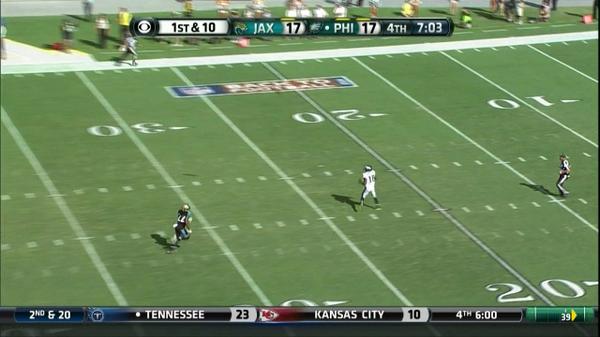 The Jaguars go for it on 4th-and-1 but Henne's pass falls incomplete.

Eagles move into easy field goal range and run some clock. Parkey hits a short kick to make it a two-possession game with less than two minutes to play.

Trent Cole strip sacks Henne and Fletcher Cox recovers for a touchdown. And the 10.5 point cover!

(Guess who called this score prediction, by the way?)