You can't get this frosty from a fast food drive-thru, that's for sure.

Hi, folks! Eagles football is back, and me and my boozy game day recipes are back as well. I'll be posting a recipe every week the Eagles are at home, and during the other weeks? Well, you'll just have to wait and see.

I kind of glossed over the main point of that previous paragraph: EAGLES FOOTBALL IS BACK. I'm so ready for this, guys. So ready. But even though football is back, it doesn't feel like fall yet. Maybe it's the 150 degree temperatures. Or the 386% humidity. Whatever the reason, it's still warm enough to break out frozen treats. Why not make them yourself? And why not add some tasty alcohol to the mix? There's no reason why not. None at all.

BEHOLD: BOOZY FROSTIES. (I've made a few modifications, so check out the original recipe here.)

Yup, just five ingredients go into this amazing treat. And now, for the super easy instructions.

1. Empty the pudding mix into the bowl. Then, get your liquid ingredients poured into their measuring cups before you add them to the bowl. This keeps the whisking process as smooth as possible.

2. Now add the milk to the bowl and start to whisk. Once the milk is fully incorporated and there's no dry pudding mix left in the bowl (though the mix can be lumpy at this stage), add the kahlua and keep whisking. Then, do the same with the vodka. The mix will be very liquidy. That's ok! You're doing it right, I promise! After the alcohol has been added (as you've been whisking of course), most of the lumps should be gone. You can still have a few, but if there are still a bunch then you want to do a bit more whisking.

3. Fold the Cool Whip into the pudding mix with the spatula. Folding is not whisking, beating, or stirring. Folding is... folding. (Great description, "writer" Liz.) It's a delicate way to incorporate a fluffy ingredient into something that isn't fluffy, so it doesn't lose its fluffiness. If that doesn't help you, this video will. I would suggest adding the Cool Whip a little at a time, even though you're only adding one cup total. I added all of it at once, and it took me waaaay too long to get everything incorporated, and even then there will still little lumps of whipped topping floating in the pudding mixture. If there are tiny floating lumps of whipped goodness, that's OK. Eating them isn't going to kill you. In fact, quite the opposite! (Note: eating Cool Whip will not actually give you life or make you live longer. PROBABLY.) 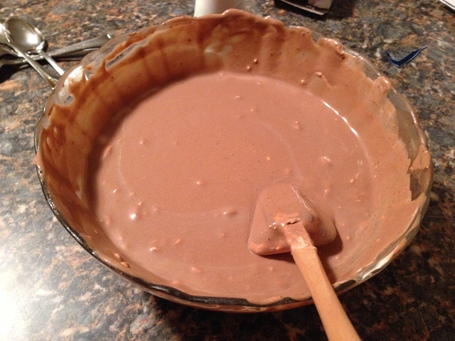 4. The mixture will still be liquidy. That's important to note, because now you need to fill up your paper cups or shot glasses or whatever you happen to be using. I used another paper cup, because apparently using a funnel was just too easy and obvious a solution for me. Please don't forget to use the spatula to scrape every last bit of goodness from the bowl. Or you could just lick the bowl. Not that I did that. Nope, not at all. Not me.

5. Once the cups are filled with the delicious, delicious pudding mixture, set them on a plate or in a baking tray. Perhaps yours will look like mine! (I added spoons for visual effect.) 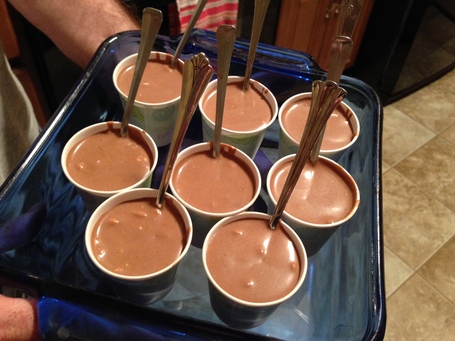 Now, stick them in the freezer and leave them there for at least a few hours. These cups of heaven will never fully freeze, though. Even with the milk and Cool Whip, the alcohol will prevent that from happening. But they have endless uses. You can eat it with a spoon. You can drizzle it over cake. Use it as a dip for a doughnut. Or a pretzel. Use it as an ice cream topping. Or pour it directly into your mouth, because damn this is one tasty treat.

Whatever you do, remember that they have quite a kick. So consume responsibly!

And, of course: GO EAGLES!