The Eagles have a Goliath offense. Will the Jaguars employ David to help stop it?

Share All sharing options for: Know Your Enemy: David Rides the Gus Bus

Each week we'll look at the strengths or weaknesses of the Eagles next opponent and see how they can exploit them. Why did a good team struggle against a bad one? How did a team going nowhere beat a playoff contender? Can the Eagles replicate or prevent it? Without any competitive games to use to evaluate yet this year, we can only speculate. There will be less words and more shiny things in future editions.

With this being the first week of the season, there is very little to go on for scouting the Jacksonville Jaguars. They have turned a good deal of their lineup over, with basically completely new offensive and defensive lines, and a new running back and wide receivers. And while the pre-season can give us some glimpses, it does not give us a concrete idea of how a team will play. So if we can not look at how good or bad specific players are or how they are used from this year, can we look at what the game plan might be based off of last year?

In Week 6 last year, Gus Bradley had a big problem. The Jaguars were scoring just 11 points a game and giving up 33, and his next opponent was the Denver Broncos, who were coming off back to back 50+ point games and averaging an astounding 46 points a game. And the game was in Denver. It was going to be a long day.

To give itself a better chance to win against a Goliath, a massive underdog can implement a David strategy: high variance plays that if they pay off give you a better chance to pull off an upset. But David strategies come with a huge risk: when they fail, they greatly increase the chance that if you lose, you will get blown out. In football, David strategies are generally offensive in nature: going for it on fourth down often, on-sides kicks, going for two, trick plays and other such high variance plays and play calling. Defensively, a "bend but don't break" approach can be, but so can heavy blitzing. These not necessarily the same as taking risks for the sake of taking risks, such as lots of deep passes, completely reversing your style of play for a single game, or calling a trick play because they're cool. The risks a David takes must be calculated.

And that’s exactly what the Jaguars did. Sort of. On their opening drive, they attempted a fake punt on 4th and 4, which failed and gave the Broncos the ball at the Jaguars 27 yard line. Six plays later the Broncos scored, illustrating the risk: the Jags were in a very early hole.

Still, a shutout was never in the cards, and a quick touchdown to open the scoring is not a back breaker. But Bradley inconsistently stayed with it. On the next drive, he punted from the Bronco’s 48, though in fairness it was 4th and 6. The punt did pin the Broncos on their 5, in part because the Broncos punt return team responded to and anticipated the fake. 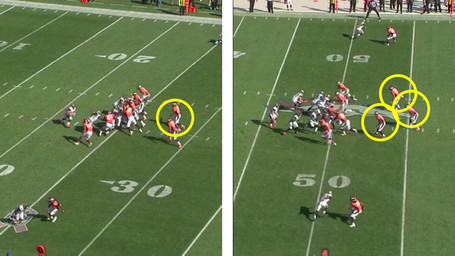 On the next punt, the Broncos dropped a lineman back to guard against a fake

But Denver scored a TD anyway. On the following possession, the Jaguars went for it on 4th and 1 from their own 29 and converted, eventually scoring a field goal. But on their next drive they punted from their 43 on 4th and 2. Why not go for it there? After Paul Poslusnzy’s pick six of Peyton Manning to cut the game to 14-12, the Jags went for two, which failed, but was still a good David strategy.

But it wasn’t just going for two and going for it on fourth down that the Jaguars threw at the Broncos. They leaned extremely heavily on their only offensive weapon, the now suspended Justin Blackmon. 20 of Chad Henne's 42 attempts, and 14 of his 27 completions, were to Blackmon, who finished with 190 yards but no touchdowns, his 14 receptions double his next best game. Henne's 42 attempts were a then-season high, which was another element of a David strategy as a pass heavy attack has higher variance than a run based one does, which is why teams throw the ball often when trailing. Within that pass heavy attack the Jags played it safe, most of Henne's passes were short and intermediate routes attempting to just move the chains and keep Peyton Manning off the field, and maybe break a big play with yards after the catch. Which is fine, Davids don't want to be taking risks on every play, and a short passing game is relatively low risk. But part of that is because Henne has a weak arm, asking him to take a lot of shots down field would be harmful.

But it could have been more. They attempted no onsides kicks, no additional trick plays and punted the rest of the game, many times from midfield, after going for it deep in their own territory early in the game. They also did not try to slow the game down by eating up the play clock to reduce the number of plays run and the number of possessions. Bradley even called timeout after a sack of Henne rather than let the clock run. Defensively, the Jaguars rushed only four defenders 73% of the time in 2013, and against the Broncos they continued that. Was Bradley simply being aggressive and unknowingly stumble into a better strategy at times?

Possibly, as this inconsistent usage continued in following weeks. In their next game against the Chargers, down 14-0, the Jaguars went for it on 4th and 1 from the San Diego 36 rather than attempt a long FG, and converted. They never did it again. On the opening drive against the Cardinals they went for it on 4th and 1 from their own 38, and caught the Cardinals napping for a 62 yard touchdown. 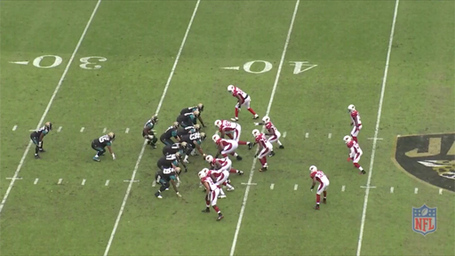 And also never did it again.

So will the Eagles face this kind of strategy? There are reasons to believe so, and reasons to not. With a new season comes renewed optimism, a blowout to start the year might not be the worth the risk to Bradley. With so many new faces on the Jags, Bradley may feel that his team has improved enough to not need it. And against the Broncos, he was facing one of the most conservative coaches in the league in John Fox, who plays it safe to the point where it is a detriment to his team.

But maybe they will. The situation is similar this year, the Jags are big underdogs, the biggest of the week. Chip Kelly's high volume play offense is a text book Goliath strategy. Kicker Josh Scobee is at the very least banged up, Bradley might opt to go for it on fourth down rather than have either his ailing kicker or his replacement try a long field goal, though that would be pragmatic. Additionally, the Jaguars are set up to take a short term beating if things go wrong and come out of it okay in the long term. With Blake Bortles not starting, this is as good a time to be aggressive as there is. When Bortles eventually goes under center, the Jaguars will likely play conservatively to protect the rookie, as most teams do. So Bradley might use this game to "be aggressive" and "set the tone" to "do your job" and other mindless coach cliches.

We may have already seen evidence of this. In their Week 3 game against the Lions, the Jaguars had the ball in the red zone with no timeouts and six seconds to go in the first half. With Bortles in the game, they ran a fake spike which did not connect for a TD, but the outcome here was irrelevant, it was a David strategy play.

By no means is this one play definitive, especially since it was run by the backup QB. One trick play in a meaningless game may have been a one off, similar to when Jeff Fisher called a fake punt in the Hall of Fame Game in 2009. But coupled with a previous but inconsistent use of a high variance play calling, it could be an indication that an aggressive style is being instilled in Jacksonville this year.

So what should the Eagles do to combat this? Next to nothing. David strategies exist because Goliath is such a superior force that will win a vast majority of the time no matter what. After a fake punt, fourth down attempts and a two point conversion attempt in the first half, the Jaguars were still losing to the Broncos, it just wasn't the blowout everyone predicted. And the Jaguars got lucky, the Broncos turned the ball over on two bad snaps, one at the Jaguars 4 yard line. When Goliaths start radically changing their approach to counter, the Davids gain an advantage. Whatever unorthodox methods the Jaguars try to utilize, the Eagles should be prepared for but not worried about. With exceptions to highly specific situations, the Eagles should not deviate from their game plan.

Admittedly, Gus Bradley might not even do any of this. We’ll find out Sunday.