Share All sharing options for: Eagles-Colts: Brandon Boykin no-call was the correct decision

One of the most crucial plays for the Philadelphia Eagles in their Week 2 Monday Night Football victory over the Indianapolis Colts was a Malcolm Jenkins interception with just over five minutes left in the fourth quarter. The Colts were up 27-20 at the time and had moved into scoring territory at Philadelphia's 22-yard line. Indianapolis quarterback threw a pass that went directly to Jenkins. It almost looked too easy for the Eagles. Here's the play:

It was easy to see why the interception took place. Colts wide receiver T.Y. Hilton, whom Luck was targeting, fell down as the ball came his way. Eagles slot cornerback Brandon Boykin was in coverage. It appeared as Boykin may have gotten away with pass interference and/or illegal contact. But did he?

After watching that play over and over, I'm just not seeing where the flag should have been. Someone over at r/Eagles did a nice frame-by-frame breakdown of the play and came to the same conclusion. Big credit to reddit user "im_at_work_now" (great name).

Here's the breakdown, along with captions:

Within 5 yards: Here we can clearly see that contact occurred within 5 yards of the line of scrimmage. That means contact is legal. But, a hold still is not, so let's look at whether it was pass interference or a hold or not. Ball still in Luck's hands when contact starts: Because Luck hasn't thrown the ball when contact occurred, pass interference is off the table. For it to be a hold, Boykin would have to visibly grab and pull the jersey of Hilton. But wait, is that Hilton reaching out into Boykin too?

Why yes it is: Notice that Hilton is leaning far to his right, showing he was trying to make a quick cut back outside. He reaches out to push off Boykin for help, while Boykin reaches out to break up the timing of the route. Notice no pulling of the jersey is seen.

How to physics? Finally we see Hilton falling away from Boykin, in the direction of his cut. A hold would pull Hilton's torso in toward Boykin, away from the cut he was making, while Hilton's legs would be attempting to run toward the outside. Instead we see the opposite, with Hilton's legs underneath him while he cuts away from Boykin and falls in the direction he tried to cut. Yes, there was contact. No there wasn't a hold. Contact inside of 5 yards is legal, and so is this play.

And there you have it.

Take it away, My. Boykin: 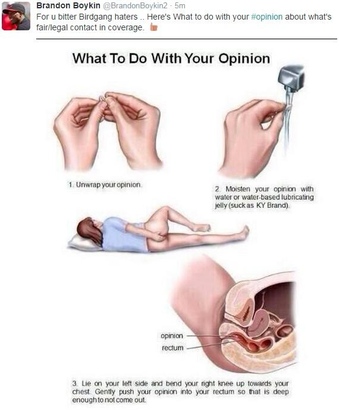