The Eagles find themselves in a favorable match-up against the Indianapolis Colts.

Share All sharing options for: Eagles-Colts Preview: Indianapolis is afraid of play action

Andrew Luck is, as you probably know, a terrific quarterback. He's not "elite", despite Sports Illustrated's hilariously boring proclamation he is, but he's really, really good. Thanks to a soft schedule and weak division, the Indianapolis Colts should once again win the AFC South by default, because they have Andrew Luck and the rest of the division has Ryan Fitzpatrick, Jake Locker and Chad Henne. The rest of the team though, it just isn't good.

Last year the Colts running game was so bad that they felt the need to trade a first round pick for Trent Richardson and his 3.5 yards per carry, and in Indianapolis he rushed for 2.9 yards per carry. Last week against the Broncos he rushed 6 times for 20 yards, which made him the Colts leading rusher. Ahmad Bradshaw had 15 yards on 3 carries, Luck had 19 on 5. One of those reasons is that Trent Richardson and Ahmad Bradshaw are lousy running backs, but the Colts offensive line is also a weak point.

Here the Colts face a standard four DL, two LB look out of nickle. They have six blockers to Denver's six defenders, and will be running off tackle to the right (our left).

The Colts wind up triple teaming DT Sylvester Williams, opening up three huge gaps: off tackle to the Colt's right, up the middle and off tackle left. Richardson has neither the speed nor agility to cut the ball back so the unblocked DE is not an issue. But the unattended LBs are, and RT Gosder Cherilus can only block one of them. As he should, he blocks the nearest to him, Brandon Marshall, and Richardson tries to cut back into the A gap hole that C A.Q. Shipley created by needlessly blocking Williams, and Richardson runs right into the unblocked Nate Irving.

Shipley had a very bad game. Here the Broncos give the Colts a look that is familiar to Eagles fans, two linebackers showing an A gap blitz.

Shipley shadow blocks Irving, barely doing more than just standing upright like a basketball screen, and Irving goes right around him and into the gap created to tackle Richardson.

Richardson had his own problems. Here the Colts call a simple Power run, with RG Hugh Thornton pulling to the left as lead blocker. The Colts line, with a numbers advantage, opens a hole and...

Richardson instead cuts it back into traffic. This is a very favorable match-up for the Eagles.

It's not just the offense that is an issue. Against the Broncos, the Colts were extremely afraid of play action.

Monte Ball has already hit the first level defenders, yet the safeties still have not made their breaks. Replace Ball with LeSean McCoy and look at all the green space in front of him.

The play action also creates space in the passing game. Here Peyton Manning is faking the handoff, which draws nearly every defender to the ball. Including the left corner. This creates a ton of space for Emmanuel Sanders down that side of the field, who has leverage on the deep safety who has no help.

Had Manning hit him in stride, it would have been a touchdown, but instead the Broncos had to settle for a 40 yard pass. Play action kept freezing defenders all game long and creating space in the passing game.

Both WRs had leverage on their CBs and S Mike Adams stops dead in his tracks, fooled by the play action. With an inside route, it would have been an easy 15+ yard play.

Here both LBs bite hard, and on the far side Sanders has inside leverage on the CB with plenty of room in the middle.

If the Colts play like this against the Eagles, Brent Celek and Zach Ertz could have big games. Expect some TE delayed routes to take advantage of the LBs aggressiveness.

Then there was this interesting sequence of back to back plays. First, the Broncos bring Sanders from the slot to the backfield, but hand off to C.J. Anderson. The play only gains two yards, but was revealing: the Colts didn't account for Sanders once the play was run. 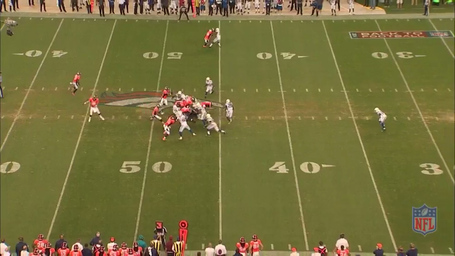 With the Colts biting on play action all day, had this instead been a toss to Sanders it would have been a big gain. On the very next play, they ran a full on reverse.

Like the earlier plays, and there were many more, the inside LBs bite hard, and the secondary stays deep. This gives Sanders plenty of open field to run in for a 15 yard gain that could have been more. Demaryius Thomas could have given a better block, and Sanders should have cut to the outside when he got to Thomas. Instead he gets tackled just past the numbers.

Certainly facing Peyton Manning contributed to the Colts defense playing off, but Broncos have an outstanding cast of WRs and TEs, and Indianapolis seemed content to give them lots of space to run with, which is a strange game plan. This bodes well for the Eagles, as they both run play action a lot and excel at it, which do not always go hand in hand.

With defenses watching the mesh point, wondering if Nick Foles would hand off to LeSean McCoy or keep the ball to throw deep, there were big plays galore for this offense. At the start of the season with multiple quarterbacks, the Eagles used play action on 24 percent of plays. When Foles was healthy for the final eight games, that increased to 39 percent. In that span Foles averaged 10.2 yards per attempt and threw 12 touchdowns on play-action passes.

The Colts were giving Broncos receivers space for yards after the catch, and that plays right into the Birds' offense. If the Colts want to approach play action against the Eagles the same way they did the Broncos, and assuming Nick Foles gets his act together, then the Eagles offense could really open up.