For every away game this season, I'll be posting a review of a football romance novel. Don't pretend you're not interested.

Share All sharing options for: Game On: A football romance novel review

When I pitched this idea to Brandon, I don't think he knew what he was getting himself into. Most people aren't aware of this particular cottage industry within the world of romance novels. But sports romance novels exist, and with a vengeance. Back in January, I wrote up three baseball romance novels for a guest post on a friend's baseball blog. It was so much fun, I decided that I could certainly apply that to football romance novels, of which there are many.

Originally, Brandon suggested this book. The description uses the word "ding-dong", so we both figured it was a winner. NOPE. We were very wrong. I've read a lot of romance novels, both good and bad, and this one was perhaps the worst one I'd ever encountered. I didn't even make it through chapter two before I had to stop reading. Note for writers of romance novels: making light of sexual assault is never a good idea.

So I decided to pick a different one, and I chose very wisely. 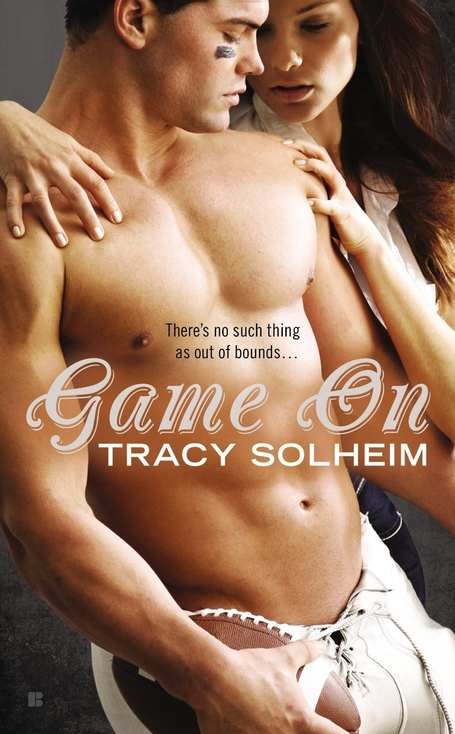 "Game On (An Out of Bounds Novel)" by Tracy Solheim

Carly March: Former "darling" of the European paparazzi, her heiress journalist mother was beheaded by terrorists when she was just a kid. She was cared for by her half-sister Lisa, who ends up married to the Baltimore Blaze's head coach. While working in Italy, Carly was publicly dumped by a two timing Italian football star, and the European paparazzi turned on her. Since then, she's sworn off dating jocks forever. When Lisa needs her bone marrow, she gladly obliges and moves to Baltimore and takes a job as personal assistant to the Blaze GM.

Shane Devlin: 30-year old quarterback, trying to get his football career back on track after a few personality-related flameouts. His father was an NFL star until his drinking and drug use ended his career, and before that his dad was a shitty father in general. His father went into rehab, wrote a bestselling autobiography, remarried a much younger woman, had a son, and became a successful college football coach, all of which made Shane really, really angry. Due to his dad's general assholery, Shane is unwilling to sustain more than a few personal relationships, and enjoys being a "bad boy" as a way to get back at his father's rehabilitated image. Signing with the Blaze is seen as his last chance to make it in football.

Shane and Carly share a deep physical attraction that is so intense they can't stand too close to each other or they'll start going at it right where they are. Shane doesn't want to get close to another human being ever again after his NFL football star father walked out on him and his dying mother. Carly doesn't want to date another "jock" after what happened with her last relationship. But they have a major attraction to each other, and even though they promise their relationship will only be physical, they're already having FEELINGS when they make that promise. Can Shane overcome his emotional distance? Will Carly get over her "no jock" policy? WILL THESE TWO EVER GET TOGETHER?

Amazingly, it's more complicated than that. Shane's father and step mother are killed in a plane crash, leaving him as guardian for their 12-year old son, Troy. Shane wants nothing to do with taking care of another human being, and is pretty much an asshole to Troy until Carly intervenes. Shane eventually sees that Troy is going through exactly what he did, only instead of being entirely alone, Troy has Shane.

And on top of that, Carly is being stalked by a Blaze beat reporter named Joel Tompkins, who Carly wants nothing to do with. At first it's just flowers and presents left in her office (and her car), but it gets creepier from there. After he's reassigned to cover the Orioles, Joel sneaks into her gated neighborhood so he can "accidentally" run into her, and then sends her an ominous "You're MINE!" email. Carly's no idiot, thankfully, and slaps Joel with a restraining order. That doesn't stop him, though. He trashes her house, and then sneaks into the Meadowlands to force Carly to come with him at gunpoint. Carly fights back and Shane saves the day in the nick of time, of course, and they both admit their love and live happy ever after. Thanks, Joel!

Do these people know they're in a romance novel?

Carly and Shane know they're in a romance novel, that's for sure. The amount of sex related thoughts they have, not to mention the actual sex, proves that. But the rest of the characters are clearly confused and think they're in a movie of the week, because there's cancer and dead parents and a stalker. Shane and Carly exist in both worlds somehow, but of course they spend most of their time with their friends in their Lifetime movie. With the amount of other crap going on, I was waiting for Carly or Shane to say "Let's ditch these needy losers and move to an island where we can constantly have sex and stare at each other's perfection."

Shane Devlin, the "Devil of the NFL" (oy vey) flamed out with the Chargers after getting involved with the owner's daughter. His drive to erase his father from the NFL record books is what keeps him going, and he's signed as a free agent by the Baltimore Blaze. The Blaze apparently need a new QB, as their young, pretty boy starter (Gabe) injured himself while hang gliding on his Australian honeymoon. Gabe's wife is a prissy former sitcom star who verbally accosts Carly because the team is revoking Gabe's signing bonus, as his contract allows the team to do. This story is part of the book for no reason and it goes nowhere, even though at one point it seems like it might. I was actually disappointed when we didn't find out if Gabe knew his annoying harpy wife was interceding on his behalf, or if his wife had purposely shipped him far away to do his rehab.

As with any romance novel, real life has to be stretched to fit the plot. The Blaze require Shane to go on an extensive media campaign to repair his image, and after that he still has to win the starting job. There's also a strict rule against players and Blaze staff getting involved, for some reason, and since Carly is managing Shane's PR blitz, they have to spend all sorts of time together. Shane is also expected to keep his name out of the press and completely shed his bad boy ways, which is explained to him at his contract signing. It's not clear if this is an actual clause in his contract, but the GM emphasizes that the Blaze are a "family" and they expect all of their players to be role models off the field. Considering what's gone on in the real life NFL lately, this plot detail was pretty interesting, if entirely unbelievable.

The novel focuses on the preseason, with mention of minicamp and preseason games. A lot of the football talk purely business -- contracts, agents, publicity, that sort of thing. So it's more football adjacent than anything else, but it doesn't treat the reader like a clueless idiot, and it includes enough technical details to keep football fans interested.

If a Cinemax after dark special had a baby with a Lifetime movie of the week, this is what you'd get. It's soapy and sexy, with personal tragedy at each turn. Carly is strong and self-possessed, which makes her the best kind of romance novel "heroine". Of course, she's also a gorgeous selfless angel who does nothing for herself, and is worshiped and adored by all who meet her. Devlin is emotionally distant, and of course his bad boy exterior is a carefully crafted image to keep everyone at bay. Everyone in this book is a good person at heart, with the exception of the stalker Joel Tompkins. A book with genuinely good (if unbelievable) characters could be a bore, but all the drama thrown at them makes it an engrossing read. The author kept all that drama (mostly) grounded in reality, kept the football details safe and mundane, and didn't make the stalker plot too cartoonish. Oh, and there's also sex.

This book contains well-described football adjacent sex between two incredibly attractive made-up people. I'm not sure why you're not reading it right now. Also if you want to pretend that the Baltimore Blaze is real and the Ravens don't exist, pick this up!