The Patriots kept Patrick Chung on their 53 man roster. That's good for the Eagles.

In the 2013 off-season, the Eagles signed five free agent starters to upgrade an awful defense. Three of those players, Connor Barwin, Bradley Fletcher and Cary Williams, were good additions. However the other two players were not and by mid-season were benched for rookies: Isaac Sopoaga for Bennie Logan and Patrick Chung for Earl Wolff. In both of their cases, the Patriots were able to bail the Eagles out. In October, Sopoaga was dealt along with a sixth round pick to the Patriots for a fifth round pick. Trading a cast off to move up a round in the draft is always a good move, making it even better, that pick was then traded for Darren Sproles. Sopoaga wound up being inactive by seasons' end and released, and the Patriots ate a $1M cap hit in dead money that the Eagles would have had to absorb had they not dealt him.

Today the Patriots again helped out the Eagles by retaining the services of Patrick Chung, who was cut in March. The release saved $2.25M in cap space but incurred a $1M dead money hit at the time. However because of off-set language, Chung's $1M contract guarantee carries over from the Eagles' salary cap to the Patriots' now that he has made New England's roster. So the Eagles are off the hook for all of Chung's remaining cap hit, and the Patriots, already taking Isaac Sopoaga's dead money, take Patrick Chung's too.

That's what friends are for... 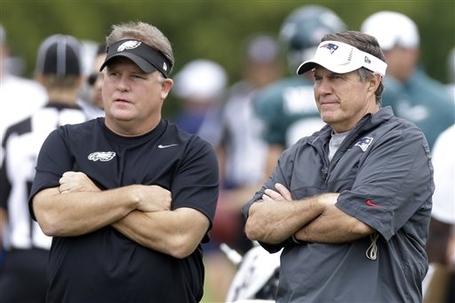