Philadelphia Eagles 2014 Win Total: Over or under 9 wins?

The latest 2014 NFL win totals from Bovada have the Eagles favored in the NFC East.

Share All sharing options for: Philadelphia Eagles 2014 Win Total: Over or under 9 wins?

Bovada.lv has updated their win total projections for the 2014 NFL season. The Philadelphia Eagles over/under win total hasn't changed from what it was earlier this offseason: 9 games. Bovada list the Eagles' over at -140 and the under at +110.

A total of seven teams have better projected win totals than the Eagles: Denver Broncos 11.5, Seattle Seahawks 11, New England Patriots 11, Green Bay Packers 10.5, San Francisco 49ers 10.5, New Orleans Saints 10, and the Indianapolis Colts 9.5. Four of those teams are in the NFC, the same conference as the Eagles.

Here are the win total projections for the Eagles NFC East division opponents.

All of these win totals are the same except for the Cowboys, who dropped half of a game from 8 to 7.5. The Cowboys have apparently been taking quite a bit of under money. That's not surprising given this Bleeding Green Nation poll from the last time we reviewed the NFC East win totals (click to enlarge): 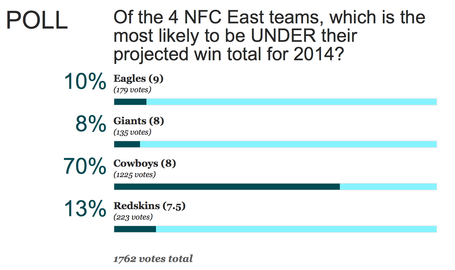 So place your bets. Will the Eagles be over or under 9 wins this upcoming 2014 season? How about the rest of the NFC East?