A fight broke out in Eagles training camp practice for the second straight day.

Perhaps the Philadelphia Eagles players are taking Chip Kelly's "We're from Philadelphia and we fight," message a little too literally.

The team finished their third training camp practice on Monday afternoon and the fight total is already up to two. Whereas Trent Cole and LeSean McCoy were the featured combatants on Sunday, this time around it was wide receiver Jeremy Maclin and Bradley Fletcher. Unlike Sunday's practice, the players were actually wearing pads this time around. Also unlike Sunday's practice, this fight was available to see for ~15,000 fans in attendance at Lincoln Financial Field.

Fight details: it wasn't clear who started it but the frustration seemed mutual. Maclin (not so soft after all, huh?) and Fletcher traded some haymakers to each others' helmet before Fletcher landed a few body shots in. Unlike Sunday's affair, this fight was broken up rather quickly and the practice returned to normal.

Jeremy Maclin was surrounded by media after practice but he left the field without speaking. Fletcher was also surrounded and spoke briefly but didn't seem to say much and started walking away when he was asked about the fight. One player that DID speak on the fight was none other than cornerback Cary Williams. Williams, who is no stranger to extracurricular activity, downplayed the significance of the fight.

"As soon as we get off the field we're buddy buddy. You can't take this into the locker room or into the next day. I mean you may take it into the next day and try to beat him up top or whatever and that's how you get him back. But for the most part what's done out here stays out here. We're family at the end of the day. We're just trying to get better. It was just frustration."

To no surprise, however, Williams added that he enjoys seeing the fights and he expects to be involved in one fairly soon.

Eagles head coach Chip Kelly doesn't seem to be one to encourage fights, but he understands it's part of football practice. Kelly spoke on this subject before Monday's practice:

"Their emotions got the better part of them, and those things happen. It’s like sometimes little kids don’t get along very well and throw Tonka trucks at each other. The fact that it made SportsCenter must have meant it was a real slow news day. Two kids push each other at practice somewhere, not a big deal."

While it might not matter much, it's still interesting to note the team has already had two fights in three days where they didn't have a single Eagle vs. Eagle fight in training camp last year*.

*Cary Williams vs. Riley Cooper happened during the regular season.

@James_T_Moore has provided a picture of the fight. 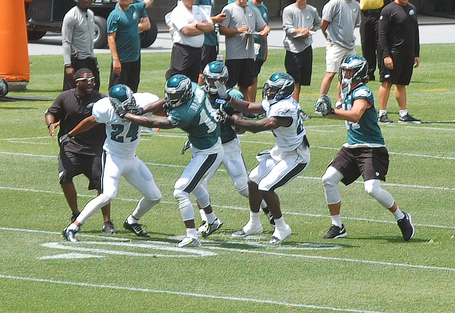