The ChipWagon has been breaking down the Top 25 plays of the inaugural Chip Kelly season. #6 highlights one of the key concepts of the first month of the 2013 season: The inside zone read-option. These two plays clearly highlight the dilemma defenses face on this play when you pair it with a dynamic and mobile QB.

Share All sharing options for: Eagles Film Review: #6 - The Dynamics of Mobility

#6 on the ChipWagon Top 25 was a play that pretty much defined Chip Kelly's decision to make Michael Vick the starter at the beginning of the 2013 season:

At #7 we poked a little fun at the Nick Foles detractors who continue to exaggerate his complete lack of athletic ability. Clearly Nick Foles doesn't scare defenses with his foot speed when keeping on the read-option, but he has enough athletic ability to sneak a key first down or TD on the goalline. However, there is no question that Chip Kelly's offense can become more dynamic with a mobile QB. He showed that time and time again in Oregon and we saw it in September of last year when Michael Vick was at the helm.

Sheil Kapadia at Birds 24/7 did a great job of breaking down the inside zone as the foundation of the Eagles offense. We'll take a bit of a closer look at this and how the inside zone can be enriched even more with the read-option (especially with a mobile QB).

We'll start off with a note on the read-option. Many people simplify the concept of the read-option down too much. They see it as a play where the offensive line leaves an edge defender unblocked and gain a blocker on the play-side. This is one correct interpretation, however as Chip showed many times at Oregon, the QB is not always reading an edge defender. Sometimes, depending on the call it can be a DT, a LB, a safety, etc.

Take a look at our highlighted play. Pre-snap this is designed to actually leave the 3-4 DE unblocked (highlighted in red): 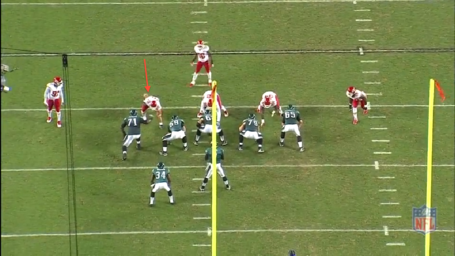 Jason Peters steps out to take on the edge defender Tamba Hali and Evan Mathis collapses down on the LB at the second level. You see Vick is reading that DE at the mesh point who is now crashing down to stop the run on Bryce Brown: 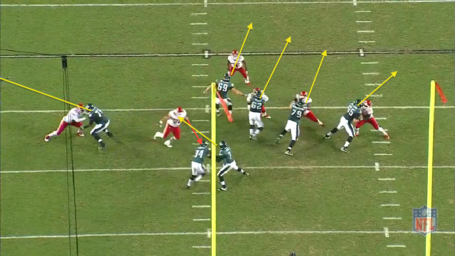 Vick makes the wise choice and keeps and the result is a well executed play with a huge running lane for Michael Vick: 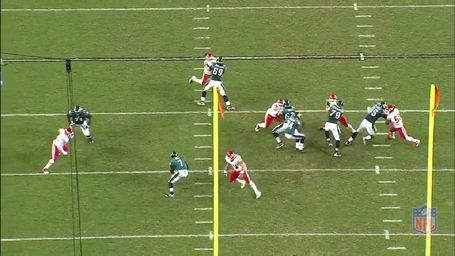 On that play, maybe Nick Foles gets you 8 yards, but Mike Vick gets you 62. That's the dynamic dilemma a defense faces.

As a result, you see the impact a mobile QB can have to create an exposive play. However the presence of that mobile QB also creates a favorable match-up when the defense overreacts to that explosive player. Check this one out in the 4th quarter of the same game:

This is what happens when the defense overreacts to the threat of a mobile QB keeping the ball. This is an inside zone read where Mike Vick is reading the blitzing safety Eric Berry. Berry stays wide to protect Vick from attacking the edge and thus Vick hands off. You can see the zone blocking as outlined by Sheil forming nicely. The key is the initial double team by Johnson and Herremans on Tyson Jackson: 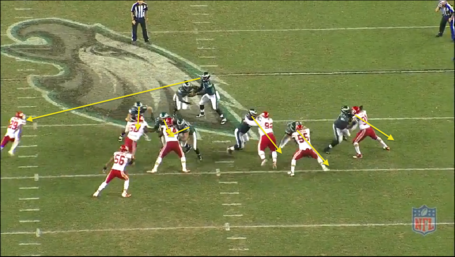 Once Johnson has Jackson under control, Herremans can peel off to take on the second-level defender, in this case, Derrick Johnson. 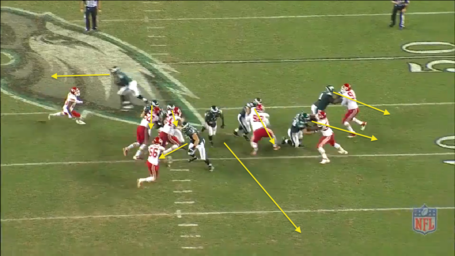 Herremans executes the block well and the rest is history: 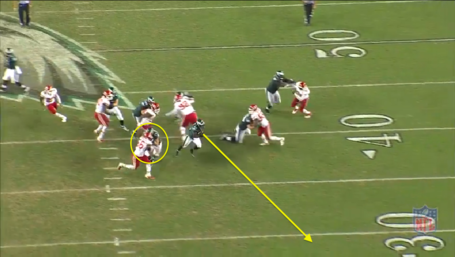 Important note: As I highlighted in a previous post you cannot build an entire offense around this read-option concept. I think that's the mistake people made when they assumed Chip Kelly NEEDED a mobile QB to run his offense. While many will argue that a mobile QB makes Chip Kelly's offense more dynamic, that really only applies if the QB can consistently execute the other aspects of the offense and a strong passing game. In the end, that's something Michael Vick proved he could not do, and at least in an abbreviated stint, Nick Foles showed he could excel at. Furthermore as highlighted elsewhere Chip came up with other creative ways to stretch the defense horizontally and open up running lanes and favorable match-ups on the outside. I elaborate further on this in my piece to be published in the 2014 Eagles Almanac. Make sure to pre-order your copy today!

You can also find us at the ChipWagon for daily breakdowns and follow us on twitter @ChipWagoneer.