Former Philadelphia Eagles quarterback and current ESPN NFL analyst Ron Jaworski is running his annual "Jaws QB Countdown" where he ranks every starting quarterback in the league from 32 to 1. Current Eagles QB Nick Foles ranked 15th. And so continues the offseason of never-ending rankings.

There's not too much to say about this one. Foles also ranked 15th on the ESPN NFL insiders quarterback rankings, which were probably more interesting because they were based on the opinions of various NFL personnel people as opposed to just one person's opinion. (Sorry, Jaws.) Either way, it's the same result. It's also a result that the majority of Eagles fans think is too low. (Click to enlarge.) 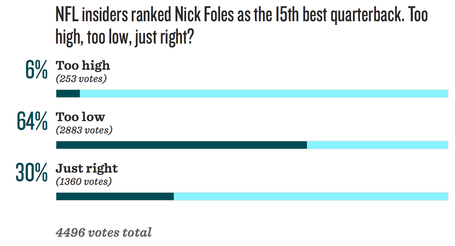