The 2014 ESPY Awards, which are presented by ESPN, take place tonight on Wednesday, July 16th. If you weren't aware, ESPY stands for Excellence in Sports Performance Yearly. The annual award show is all about honoring sports and athletic achievement, both on an individual and team basis. This year's event will be hosted by Canadian rapper Drake.

Two members of the Philadelphia Eagles have been nominated for an award.

Best Breakthrough Athlete
The other Eagles player nominated for an ESPY award is quarterback Nick Foles. Foles has been nominated for the Best Breakthrough Athlete award. It's easy to see why. The second year Foles went from competing for and losing the Eagles starting quarterback job to filling in and throwing for 27 interceptions and 2 interceptions over the course of the 2013 season. Foles' fellow nominees include Portland Trailblazers point guard Damian Lillard, Seattle Seahawks cornerback Richard Sherman, and New York Yankees pitcher Masahiro Tanaka.

Last chance to vote!
You can still vote for McCoy and/or Foles by clicking here. Voting doesn't close until the ESPY Awards show begins tonight at 9 PM.

Can McCoy or Foles actually win?

Survey says... it's not likely. These kind of awards are essentially popularity contests. For as good as McCoy is, he's probably not as popular as recent Super Bowl 48 quarterbacks Peyton Manning and Russell Wilson. Foles is even less popular and he could lose out to Richard Sherman, who was recently voted to be on the front of the Madden cover.

Over half of BGN voters think that the Eagles will go home empty handed. (Click to enlarge.) 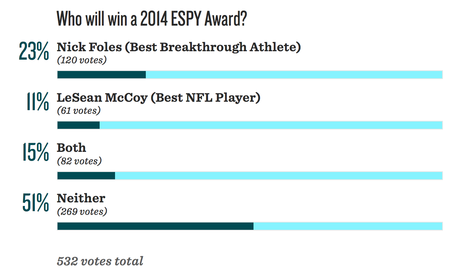 How about some ESPY odds? Courtesy of Betfair Sportsbook, a subsidiary of Betfair Casino.