A way too early look at some Eagles 2015 free agent pass rusher options.

Tuesday's 4 PM EST deadline of NFL teams being able to sign players who have received the franchise tag to long-term contract extensions has come and gone. What this means is that those players who were tagged but not extended will now play out the 2014 season on their one-year franchise tender. After the season is over they will be unrestricted free agents.

Which position concerns you the most?

Eagles Ideal Free Agent Target: Brian Orakpo Which position concerns you the most?

This is of interest to the Philadelphia Eagles not because they had a player in this situation, but because the franchise tag may have indirectly impacted them this offseason. The Eagles clearly had a need at pass rusher and reportedly showed interest in some names on the free agent market. The problem was that the pass rusher market, especially at 3-4 outside linebacker, wasn't very deep or talented to begin with. What made matters even worse was that top targets such as Washington Redskins outside linebacker Brian Orakpo and Carolina Panthers defensive end Greg Hardy were tagged before free agency began, so the Eagles never really had a chance at landing them. Similar conditions applied for transition-tagged Steelers linebacker Jason Worilds.

The good news is that these players such as Orakpo and Hardy have a better chance of hitting free agency in 2015. The chances they are designated with the franchise tag again is low because the cap hit goes way up when used in consecutive years: Orakpo would cost $13.75 million and Hardy would cost $15.74 million.

In some respects it's way too early to look this far ahead to next year but at the same time the Eagles don't have an apparent answer at pass rusher. Trent Cole is aging and could be a cap casualty after this season while Connor Barwin is more of a jack of all trades. The Eagles drafted outside linebacker Marcus Smith in the first round of the 2014 NFL Draft but that might not prevent them from adding a top talent.

Whether the Eagles will want to explore the 2015 NFL free agency pass rusher market or not is a question best saved for much later. But for now at least it's nice to know there could be some options available.

PS - I found this poll at Hogs Haven slightly entertaining. (Click to enlarge) 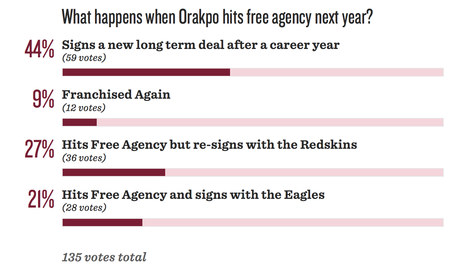