totally a real report 100% definitely not made up

Share All sharing options for: LeBron James signs with the Philadelphia Eagles

Wow. In a stunning move, NBA free agent superstar LeBron James has decided to end his basketball career entirely and join the NFL for now. His team of choice? The Philadelphia Eagles. Check out this 110% real and definitely not fake tweet screenshots from actual multiple sports insiders: 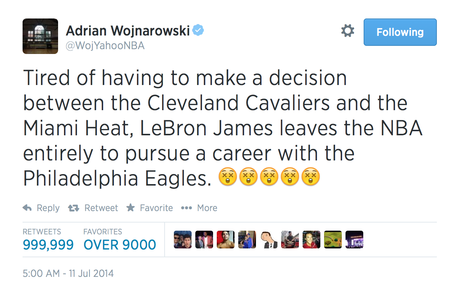 Amazing! And it looks like the Eagles newest player himself confirmed the decision!

The note about the Cowboys is especially interesting. James has been seen donning Cowboys gear a number of times before. He also attends their games with some frequency. It turns out three straight years of 8-8 was just too much for James to handle.

"Yeah, I just got tired of it. It's the same thing every year," James elaborated, before taking a quick shot at the Dallas Cowboys quarterback Tony Romo. "And people say I'M the one who chokes in the fourth quarter. But that's enough about that. I've taken my talents to South Philadelphia and I couldn't be happier. I'm ready to face this new challenge."

Eagles head coach Chip Kelly was visibly thrilled with James' addition. "Versatility is obviously a huge factor for us, and LeBron can do it all," Kelly said. "Plus, he can f**king score points, and that perfectly fits our plan."

General manager Howie Roseman was also available for quote. When asked about how he convinced James to make the switch, he explained, "It was easy, really. How hard is it to convince someone NOT to sign with Cleveland?"

No contract terms have been made available yet, but it has been rumored James will play wide receiver. This really appears to be a masterstroke by the Eagles. And now the DeSean Jackson release also makes more sense. The Eagles were able to clear cap space and upgrade by adding one of the best athletes in the entire world.

It appears James will wear number 20, which was recently retired in honor of the great Brian Dawkins. Word is that Dawkins personally allowed James to select his jersey, boldly professing that "The King" is now the "Next Dawkins".

And great job by you, the reader, for making it all the way through this incredibly fake report.