The Philadelphia Eagles have been well-behaved.

Share All sharing options for: Philadelphia Eagles rank near bottom of the NFL in arrests since 2000

The only news that tends to happen during the NFL's dead zone, the period between the end of minicamp in June and beginning of training camp in July, tends to be bad news. It's a time where NFL players have 30+ days to freely spend their time as they wish. Sometimes that freedom brings trouble. A number of players are arrested during the NFL offseason. For example, Eagles left tackle Jason Peters was arrested last summer when he allegedly was involved in drag racing and resisting arrest.

For the most part, however, the Eagles have had players who stay out of trouble. Since 2000, the Eagles have only had 12 players arrested. That ranks tied for the second lowest in the NFL. Only the St. Louis Rams and Houston Texans (who didn't enter the league until 2002) have had fewer. None of Eagles arrests were really serious incidents and only two of them came from a player still on the team: the aforementioned Peters.

Using data from the UT San Diego NFL arrests database, I created a chart of NFL arrests since 2000. The Minnesota Vikings lead the league with 44 arrests, nearly four times more than the Eagles' have had. (Click to enlarge.) 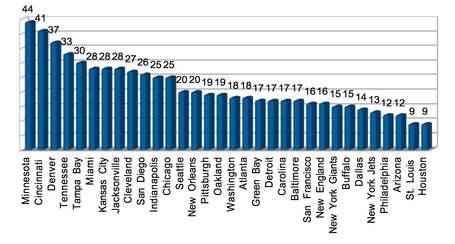 The importance of player character to the Eagles has been apparent over the years but especially so now with Chip Kelly at the helm. If the trend holds true, it should be another quiet offseason for the Eagles on the arrest front.

You can now complain about how I have jinxed the Eagles for this upcoming offseason.