2014 NFL Draft Preview: Visualizing What the Eagles Offense is Missing

We can talk about what the Eagles need to draft, or even better, we can look at it.

Share All sharing options for: 2014 NFL Draft Preview: Visualizing What the Eagles Offense is Missing

The 2014 NFL Draft is just days away, and the Eagles will almost certainly take a wide receiver at some point. They may even take two. No matter who the player(s) are they will be looked at by many as the answer to a question that looms over the Eagles 2014 season: how do the Eagles replace DeSean Jackson? It is a question we have all asked, but it has been answered in the abstract. Jeremy Maclin can do this, Darren Sproles can replace that, Arrelious Benn could add this, they will draft a WR who can provide this other thing, etc. Considering that none of those players ever played a snap under Chip Kelly, projections are a fair way to look at the question.

The simple way to look at it is that Eagles have to replace DeSean Jackson’s production of 82 catches, 1332 yards and 9 TDs. That is really good production, but does not tell the whole story of what is missing from the Eagles passing offense. One aspect overlooked is that the Eagles also have another departed wide receiver to replace, Jason Avant and his 38 catches, 447 yards and 2 TDs. Avant was one of the least productive starting WRs in the league last year, so replacing his production will be easy. This directly relates to replacing Jackson’s production though. Football is a zero sum game, what is good for me is bad for you, and vice versa. Generally this applies to narrowing game theory down to an easy, nearly binary decision making process, but it holds true among teammates as well. If a slot receiver is thrown a pass, then an outside receiver, tight end or running back can not possibly get a reception. DeSean Jackson and Jason Avant caught 120 passes for 1779 yards and 11 TDs combined. Those counting stats only paint a limited picture though, context matters. We can establish that context by visualizing those receptions. This, in a nutshell, was the Eagles passing offense in 2013: 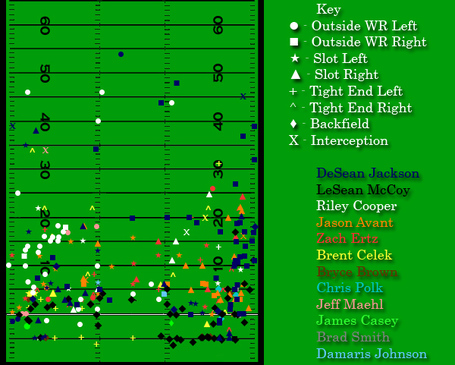 Or is it a spilled box of Lucky Charms? No, it is where every reception and interception the Eagles threw was caught, and how each player lined up for that reception. There is a lot going on in there, so we will take it in stages. To replace Jackson, we must first see what exactly he did so that we understand what needs to be replaced. 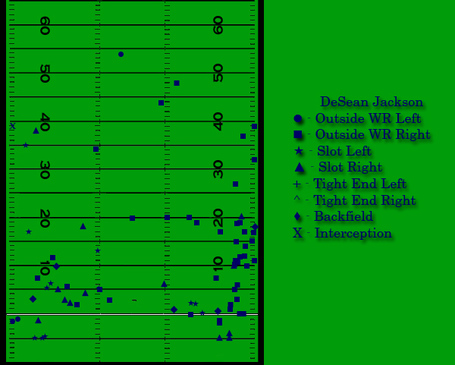 And Avant as well:

Every season is different but this is the total production the Eagles must replace, not just Jackson’s: 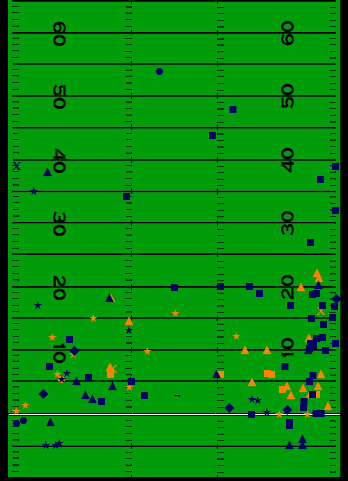 Or, alternatively, what the offense looks like without them: 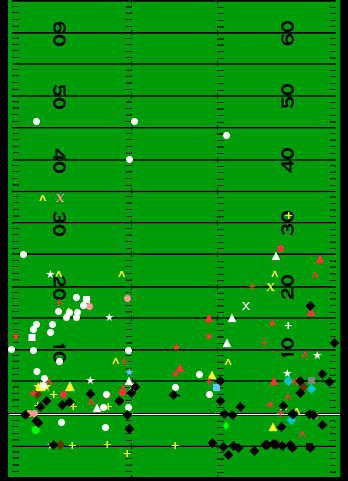 There are obvious holes to fill, deep receptions and a lot of intermediate passes. Every season is different, but the success the Eagles offense had in 2013 gives us a very good blueprint for what Chip Kelly wants his offense to look like, so it is fair to use that as a template to put the puzzle pieces together. Let us start with the obvious piece the Eagles have added to solve this problem, Darren Sproles. With LeSean McCoy having the starting running back position on lockdown, Sproles will most likely see a lot of playing time in the slot, where he should be very productive in general and extremely productive compared to Avant. Sproles played 32% of the Saints' offensive snaps in 2013, and should see at least that amount of playing time with the Eagles. His counting stats will almost certainly decline, but that does not matter, Sproles does not need to repeat the 77 catches he averaged while with the Saints, he only needs to exceed Avant’s production in 2013 to be an upgrade. Sproles will likely be used similar to how he was used in New Orleans:

Add Sproles to what is left of the Eagles offense and it starts to take shape. Sproles can more than make up Avant's production, and can replace some of the short and intermediate throws that Jackson received. This is the zero sum game, when Darren Sproles catches some of the short and intermediate passes around the numbers that Jackson did, it lessens the load his teammates will have to take up. 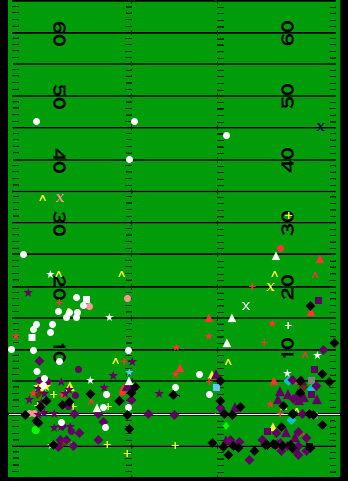 But there are other "new additions" to the Eagles passing offense. The obvious current replacement to fill most of the Jackson void is Jeremy Maclin. To get an idea of Maclin’s contributions, let us look at the seven games Maclin played with Nick Foles in 2012. It was a different offense and Foles has progressed as a player since then, but it is the best we have to go on. 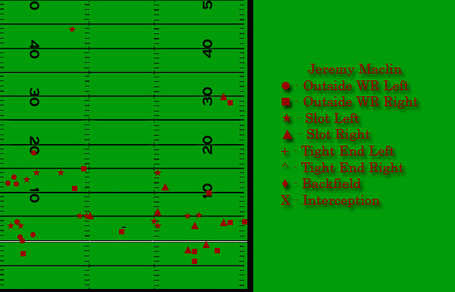 There is yet another player on the roster that is essentially a new addition, Arrelious Benn. Benn missed most of 2012, so this is his 2011 season. This gives us an idea of what he is capable of. 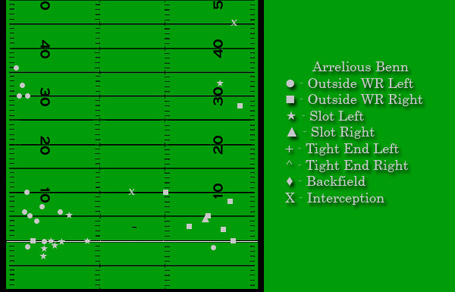 Adding those three with the returning players and compare side by side with the 2013 Eagles and we get a very good idea of what is missing from the 2014 Eagles offense. 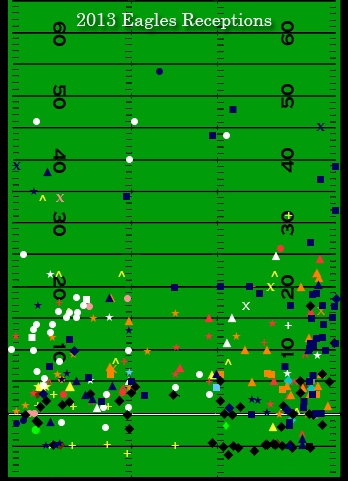 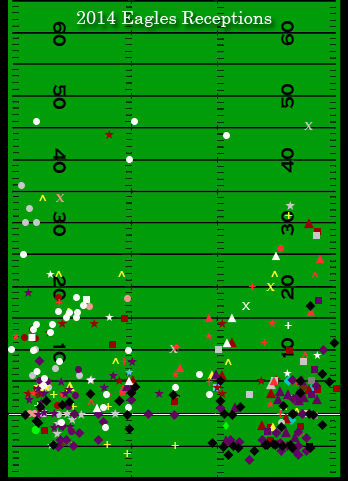 If the 2014 Eagles offense is going to be a reasonable facsimile of the 2013 Eagles offense, then we can see what is missing. How does Chip Kelly fill that void? There are of course other in house options. Riley Cooper's career took off once Nick Foles took over. 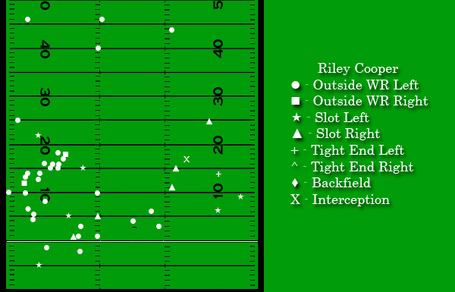 As did Zach Ertz. Ertz’s production skyrocketed in the second half of the season and figures to play a more integral role in the offense in 2014, in part because of his ability to line up anywhere.

So we see that as Cooper and Ertz blossomed in the 2nd half of the season, Jackson and Avant's production changed as well. Jackson's receptions with Vick as QB were fairly evenly distributed, but under Foles he amassed a lot of receptions to the right side of the field and on crossing routes from the right side. 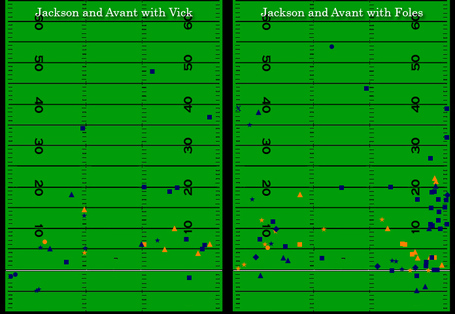 Similar trends can be seen with other players: 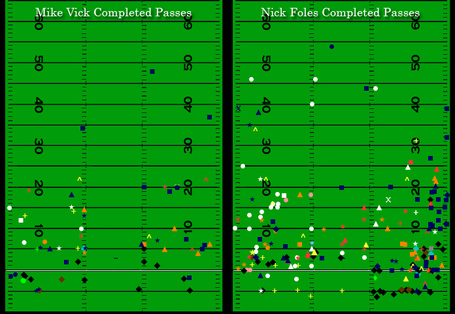 A few things stand out here. Vick has a much smaller sample size, but he did not complete any passes that were caught inside the hash marks, Foles threw his fair share of them. Under Foles, Eagles pass catchers made most of their receptions in specific areas of the field. LeSean McCoy saw a lot of screen passes to the right side, Brent Celek ran a bunch of TE screens on the left, Riley Cooper set up shop up and down the left side of the field, Zach Ertz made good use of the middle of the field, and as we saw above Jackson operated mainly on the right side of the field.

We can draw some conclusions to how the current roster could play out the season, and off of that understand what qualities the Eagles would look for in WRs under Chip Kelly and what they might do in the draft. The Eagles continue to practice what they preach, the team has a starting lineup ready to roll without any rookies. Another look at reception chart of current Eagles shows that the offense is actually well covered:

The Eagles already have plenty of options for short and intermediate passes. There is a bit of a void on deep balls, but it is not severe. DeSean Jackson caught three 40+ yard bombs, even without those the Eagles still would have led the league in 40+ yard passes. The Eagles were also so far in the lead on 20+ yard passes with a total of 80 that a drop off would still keep them as the most explosive team in the league, the Broncos ranked second with "only" 68. Jackson caught seven passes between 30 and 40 yards deep, Maclin and Benn combined caught six--and that was only looking at half of Maclin's games played. This chart is heavy on intermediate passes to the left and light on the passes to the right, but we can project a bit. With Cooper likely to operate almost exclusively on the left side again, Maclin and Benn, who have at least half their receptions on the left, would instead be catching those passes on the right, filling the gap. Additionally, Ertz caught the better part of his passes on the right, and he should catch even more passes overall in 2014.

The trio of Maclin, Benn and Sproles, along with the increase in production of Cooper and playing time to Ertz, could adequately replace the lost production of Jackson and Avant if it had to. This means that the Eagles do not have to draft a particular type of player to fill a void, such as a deep threat like Brandin Cooks, or a big receiver like Kelvin Benjamin or any one else. They truly can take whoever they feel is the best player on their board, whoever that may be, whatever round that might happen.