Saginaw Valley State wide receiver Jeff Janis is a fast-rising prospect for this week's NFL Draft. He sat down with BGN's Head NFL Draft writer Mike Kaye to discuss his college career, the NFL Combine and his future.

There has been no secret that the Eagles would like to add a wide receiver in the draft. After a vast and very public search for the next Philadelphia pass catcher, it is safe to say that the team could add multiple receivers to the lineup during draft weekend. One player that has seen his stock rise with the media and Eagles fans is Saginaw Valley State wide receiver Jeff Janis.

From his 6-foot-3 height to his blazing speed, the Division II product seems to be a mix of everything the Eagles want in a wide receiver from an athletic standpoint. Janis tested extremely well at the NFL Combine. His numbers included 4.42 seconds in the forty-yard dash, 6.64 seconds in the 3-cone drill (third among wide receivers in 2014) and  his 20 reps on the bench press. Janis also was one of the few Division II players to be invited to the Reese's Senior Bowl.

Janis has projections all over the place for his value for this week's selection process. Due to his small school background, members of the media have had trouble evaluating the big speedster. While he has all the tools to be successful at the NFL level, scouts have not been able to see him play tons of top competition, which has caused his projections to be scattered from the third to the seventh round.

Still, Janis is very confident in his abilities and believes he can play at the next level. He has the drive to succeed and teams have shown interest in him. He comes from a small school, but Saginaw Valley State has produced talent in the past, including Eagles right guard Todd Herremans. Janis knows that his goal is obtainable and he has his sights set on the NFL Draft.

With his dream set to become a reality in a matter of days, Janis sat down with BGN's Mike Kaye to discuss his college career, his NFL Combine performance and more.

Mike Kaye: Saginaw Valley State isn't really known for producing prospects, what made you choose to go there?

Jeff Janis: I wasn't heavily recruited coming out of high school. Coming out of [Tawas City, Michigan], like Saginaw Valley, not a lot of athletes come out of here. I thought I was going to go to a lower Division I school, but that didn't end up happening, so I went to visit a bunch of Division II schools and Saginaw Valley was actually the last one that I visited. I liked it and really liked the campus and the coaches. Coach called me the next day and offered me a scholarship and I took it.

MK: When you got to Saginaw Valley State, what were your goals? Did you have aspirations of going to the NFL or were you just trying to get an education and play college football?

I think my biggest attribute that can help a team is just stretching the field and using my speed to get past defenses and past defensive backs. -Janis on his game

JJ: At first, it was all about education and graduating. Thankfully I did that, but coming off my junior year after putting up big numbers, I heard all the talk from the coaches [that were] saying they thought I could go to the next level. That's when I started taking [the NFL] seriously. Obviously, my senior year I had a good year too. It has all worked out well and I have had fun doing it.

MK: You set the school record for catches and receiving yards as a junior, what was that like? Was that a big accomplishment for you or did you just go about your business? Did it ever set in what you had accomplished.

JJ: No, not really when it was happening. Not until the season was over and you sit back and look at what you did. That's when I did realize that I actually beat some pretty big records that were made by some pretty good players. 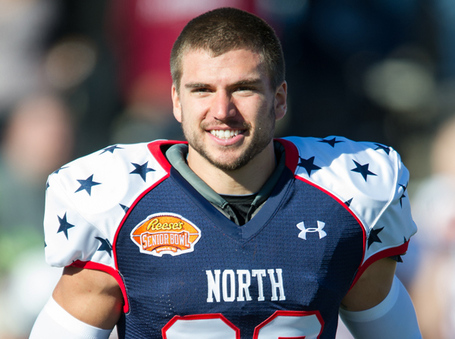 MK: Have you been able to talk to any former or current NFL players to get perspective on going into the draft as a small school guy and get advice?

JJ: Yeah, I've talked to a few receivers that played in the NFL [like] Glenn Martinez and Ruvell Martin, who went to Saginaw Valley. [I also spoke with safety] Jeff Heath, who I came in with as a freshman, who is playing for the Cowboys. I am still really close with [Heath] and I talk to him all the time and ask him questions and get advice from him. So yeah, I have talked to quite a few people.

MK: At 6-foot-3, 219 pounds, we would call you a "bigger" wide receiver. How does your game measure up to your height? Are you a finesse receiver or do you like to go up and get the ball? What does Jeff Janis bring to the table as a receiver?

JJ: I think my biggest attribute that can help a team is just stretching the field and using my speed to get past defenses and past defensive backs. But going up and getting the ball is something that I feel I am good at and I probably can improve, but I think any receiver can. I am just really looking forward to this NFL experience and learning things about receiver and becoming a better player.

I think the week of the Senior Bowl I showed that it doesn't matter that I come from Saginaw Valley or a Division II school.

MK: You tested extremely well at the Combine, what went into your preparation for the event?

JJ: I trained in San Diego at "Athlete's Performance" and I was out there for about two and a half months training for the Combine. I took a week of break for the Senior Bowl obviously, but it was a long period of training and it paid off.

MK: Going into the Senior Bowl and playing against talent from the ACC, SEC, PAC 12 and more, how do you think that helped your draft stock?

JJ: I think [the Senior Bowl] definitely helped because the one thing people wanted to see was if I could compete at the next level. I think the week of the Senior Bowl I showed that it doesn't matter that I come from Saginaw Valley or a Division II school. I think they were pleasantly surprised and any team I go with, there won't be a question of whether I can compete. That was my main goal at the Senior Bowl. [I wanted to] show that I could really compete at that level.

MK: How did being a high school basketball player translate to your game on the football field?

MK: What do you know about the Eagles offense? How do you think you could allocate yourself to that offense?

JJ: I don't know too much about the Eagles offense, other than that they have got some really great players and a great quarterback. I think I could really help the Eagles and hopefully in the future, maybe it works out.