West Texas A&M kicker/punter Kevin Van Voris is ready for the NFL Draft and he joined BGN's Mike Kaye to catch up on his draft process, his Pro Day and more.

A lot has changed since BGN spoke with West Texas A&M kicker/punter Kevin Van Voris in February. He has gone from an unknown and unranked talent to a possible NFL Draft pick. It is a testament to his both his drive and talent, that after participating in his Pro Day and Super Regional, Van Voris is now on the doorstep of his dream.

A confident and poised technician, Van Voris has mastered the ability to punt for distance and nail field goals from long range. While he participated as mostly a kicker in the draft process, Van Voris was also a talented punter at the college level and could play either position at the next level. If teams didn't know about him before, they certainly do now, after performances in front of several scouts from dozens of teams this offseason.

With the draft just days away, Van Voris recently joined BGN's Mike Kaye to catch up on his draft process, his talent and more.

Mike Kaye: Our first interview was a little more than two months ago. Can you talk about what the process has been like over the last few months?

Kevin Van Voris: Since then I did have my Pro Day and had the Super Regional a few weeks ago. I've been training, so nothing has really changed on that part. The Pro Day went really, really well for me. I made bunch of field goals and had some 70-yard punts. Kickoffs were going out of the back of the endzone.

KVV: I know for kickers, snappers and punters they have three [regional combines]. They have one in Houston, one in Seattle and one in New York at the Jets facility. Basically, if they thought you were good enough, after they watched the film, they would select the ones that they thought were the best [to attend the Super Regional]. With position players, that would obviously go by your times, height, weight and all of that, but for kickers it just goes by if you made all of your field goals or made more of them.

At the Super Regional, there were only nine kickers out of 150 that tried out.

The scouts that were there were impressed. I even had a few agents of my teammates tell me that I did really well. -Van Voris on his Pro Day

MK: Did you tryout as a punter and kicker at the regional combines or just as a kicker?

KVV: In Houston [at the regional], they told me I had to chose whether to kick or punt. They were doing kickoffs with field goals, so I chose kicking because punting was just punting by itself.

KVV: Right, but the good thing was that I got to do all three at my Pro Day. The scouts that were there were impressed. I even had a few agents of my teammates tell me that I did really well. So coming from them and the scouts there, I know I performed well at my Pro Day.

The Super Regional was okay. It was a bit more nerve-wracking. The way they set it up, it was probably not the best way to do it. They didn't give us a lot of time to warm up properly in between field goals and kickoffs. It wasn't the best set up but you [have to] do what you do best. 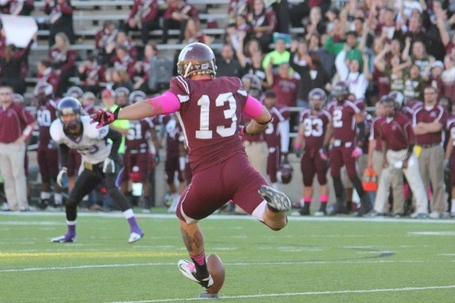 MK: How many teams were at your Pro Day and the Super Regional?
KVV: At the Super Regional, all 32 [teams] were there. They were in the stands, so you couldn't exactly see 32, but they told us that 32 were there. At my Pro Day, there was 22 or 23, especially because we are a D-II football school. We probably have a solid 7-8 guys that will at least get a minicamp invite.

MK: Have you gotten any advice from former NFL kickers?
KVV: The only one I have gotten advice from was Michael Housted, who I trained with in San Diego. He just said to be patient, especially as a kicker coming from a small school. This was back in January, before anyone even knew about me. After Houston, my kicker stock started rising and after my Pro Day it kept rising to the point where now I'm ranked. Before I wasn't even ranked, especially at kicker because technically I am a punter from college, because I never kicked [field goals] in college. To be ranked when never played the college game [as a kicker] was huge to me.

MK: Where are you ranked?
KVV: On NFL Draft Scout, I am ranked 19th and it hasn't been fully updated yet but that's from a while ago and on, I believe it's NFL Draft 101, I am ranked number six.

MK: What are you going to do for the NFL Draft?
KVV: Well, this is probably going to be the most stressful week of my life. I am just waiting. Being a kicker, it's not like you're going to be drafted in the first or second round or even the third. Usually kickers get drafted in the fourth through seventh round. It's kind of frustrating because you just have to wait and see.

MK: Since the last interview, you've been getting a lot of love from Eagles fans. What would you say to Eagles fans or fans of other teams that have supported you on your draft journey?
KVV: I really do appreciate the love and support I've been getting from Eagles fans. Whether I am an Eagle or not, the people who follow me or have watched my senior season highlights like that, I am really appreciative. Especially coming from a small school, you don't kind of get that. It's cool to see fans like that from the Eagles that are rooting for me. Whether they want me to be an Eagle or not, most are just hoping I make it to the league. It's really cool to hear that from people I don't even know. It's awesome.