The Seattle Seahawks have caused teams to jump at bigger cornerbacks. Much like Pete Carroll, Chip Kelly appreciates size in his defensive backs, which is good news for Lindenwood standout Pierre Desir. The talented Division II cornerback recently sat down with BGN's Mike Kaye to discuss his future in the NFL.

Lindenwood cornerback Pierre Desir has become one of the biggest risers in this year's NFL Draft. A small school product from Haiti, Desir has been through a lot on his path to the NFL. A married father of two (his first daughter was born in his junior year of high school), Desir has had the responsibilities of being a dad, a husband and a Division II player hoping to become an NFL prospect, all before the age of 24.

Desir started his college career at Washburn University, where current Eagles cornerback Cary Williams also played before entering the NFL Draft in 2008. Desir arrived on campus right after Williams left and redshirted in his first year. He then went on be selected to the All-MIAA first team as a redshirt freshman. He followed that performance with second team honors in his second year of play.

In order to be close to his children, Desir transferred to Lindenwood University in 2011. He redshirted his first year on campus, but compiled 93 tackles, 37 pass breakups and 13 interceptions in his two seasons of play for the Lions. He finished his college career with 25 interceptions over four years, which was good for a Top 10 spot all-time in Division II history.

Despite being a big cornerback at 6-foot-1, Desir's small school background has likely been his biggest issue with getting the attention of draftniks and fans. He was a "big fish in a small pond," which make his numbers hard to gauge for scouts. However, if you watch his tape, you can see why teams have paid attention to the talented defensive back. His natural talent and production has him firmly placed among the Day 2 prospects in this year's crop of cornerbacks. That's not too shabby for a Division II cornerback that most draftniks hadn't heard of until the all-star season, when he was invited to both the East-West Shrine Game and the Reese's Senior Bowl.

Desir recently sat down with BGN's Mike Kaye to discuss his college career, his surprise rise in projections, his aspirations for the NFL and more.

Mike Kaye: You kind of went from a guy no one has heard of to a possible second round pick. Are you surprised by how much your stock has risen among the media?

Pierre Desir: Yeah, definitely. I feel that for me, it was definitely a lot harder for me to get attention put on myself because I was from a small school and no one knew who I was. They didn't know where Lindenwood [University] was located. When [I started getting noticed], people were talking about me and giving me good feedback. It all kind of happened really quickly and really fast. I was surprised and blessed that it was able to happen.

MK: As a young father and husband, how has that impacted your work and your perspective on your football career?

PD: Being a father has allowed me to mature and put all my goals and what I need to do into perspective. I wasn't just playing for myself, I was playing for my wife and my daughters. I had a lot more on my plate and a lot more things to think about. My family was my motivation, so I really needed to take a look at all the things I needed to do and what path I needed [to go on] to reach [those goals]. 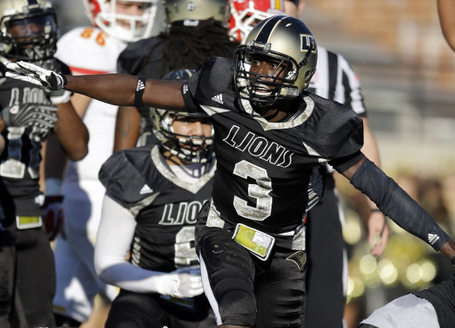 MK: What was the all-star game atmosphere like after playing Division II throughout college?

PD: I showed that despite playing against the lower level competition, I could play with those guys. For me, that whole all-star experience was about proving to people I could still make plays with the Division I guys.

Being a father has allowed me to mature and put all my goals and what I need to do into perspective. I wasn't just playing for myself, I was playing for my wife and my daughters. -Desir on being an athlete and a dad

MK: What was your NFL Combine experience like and what went into your preparation?

PD: For the Combine, I was training at a facility called '4th and Inches,' which is located in Dallas, Texas. I would do six hours of training each day, Monday through Saturday. I was working on individual drills that I would do at the Combine and I would do the field drills like the forty-yard dash, 3-Cone and the 20-yard shuttle. We would work on those aspects during my time while I was training. We [then] worked on interviews and training with coaches and getting all of that out of the way. It was just a long couple of months of training.

MK: Who would you compare your game to in the NFL?

PD: I would compare my game to Richard Sherman. The reason why I say that is because I think me and him have similar traits. He is a playmaker and he makes plays with the ball in the air. He is always around the ball. He's a smart football player, he studies the game really well and he's one of the best. I always try to rank myself against the best with the players that are out there. I think I am very similar to him.

MK: How do you think you can fit with the Eagles?

PD: I think because of my height and my length that I can fit in a scheme with a team such as the Eagles. I think I would be put in a position to be successful and use my size to make plays and make contributions to the team. I could show everyone that I can do it and make that transition and be in a system where I could be successful.