A four-year starter at Boston College, linebacker Kevin Pierre-Louis is set to join his former partner-in-crime Luke Kuechly in the NFL. Pierre-Louis is ready to bring his tackling prowess and intelligence to the next level and he sat down with BGN's Mike Kaye discuss his next step in the upcoming NFL Draft.

The Eagles have been looking at the linebacker position throughout most of the offseason. While the starters at inside linebacker seem set, the depth at the position and its future are still up in the air. Boston College's Kevin Pierre-Louis could be one of the many talented players in consideration in the middle rounds of the upcoming selection process.

A tackling machine and former teammate of current NFL Defensive Player of the Year, Luke Kuechly, Pierre-Louis is one of the more experienced players at his position. A four-year starter that played in 34 games in college, Pierre-Louis complied 360 tackles (23 for loss) and eight sacks, while serving as a leader in the locker room for the Boston College Eagles. A first-team All-ACC selection in 2013, he was productive throughout his entire career, despite missing six games over four seasons due to injury.

Pierre-Louis shot into the draft spotlight following his eye-opening NFL Combine performance. He finished in the top three at his position in the forty-yard dash, bench press, vertical jump, broad jump and short shuttle while in Indianapolis. His 4.51 seconds in the forty-yard dash was the best among linebackers this year and is tied for 12th all-time at the annual event.

Pierre-Louis recently spoke with BGN's Mike Kaye to discuss his game, his college career, his ridiculous combine and his path to the draft.

Mike Kaye: What made you choose Boston College?

Kevin Pierre-Louis: "I had a few scholarships but I had it down to Stanford and Boston College [when it came down to choosing a school]. My thought process was about life after football. One day, it is going to stop, so I wanted to have something in my back pocket to help me further my career, no matter which way it was going to go after football.

"When I step on the field, I like to compete and if there is someone I can compete with, best believe I am going to compete with that person."   -Pierre-Louis on being a competitor

I originally had committed to [former Boston College] coach Jeff Jagodzinski in high school but there was a coaching change, so there was a chance that I could have gone to Stanford. [However], after talking to my family, I decided to commit to Boston College, since it was a little bit closer to home and it would give them the chance to see my games."

MK: You played at Boston College with Luke Kuechly for two years, has he been a guy you've been able to lean on during the draft process?

KPL:  "Yes, [Kuechly] is definitely a guy I could lean on if I had chosen to, but I realized that he and I were in different situations going through the draft process, so I've kind of taken it upon myself to go through it on my own. However, if I ever have any questions, I know he'll be there for me. He's a guy I learned a lot from. I got the chance to start as a freshman and was the WILL linebacker next to Luke, who was the MIKE, and Mark Herzlich, who was the SAM. There were a lot of good players on the defense that year, so I go to learn a tremendous amount from them."

MK: Given the success that Kuechly, Herzlich and you have had in getting to the NFL, could you see Boston College becoming the new "Linebacker U" over the next few years?

Besides that, I think the guys we produce in the league have a reputation of being these hard-nosed, tough, showing a lot of effort, 'BC Guys.' I hear that all the time on interviews, [they say] 'That's a BC guy.' That's the stigma." 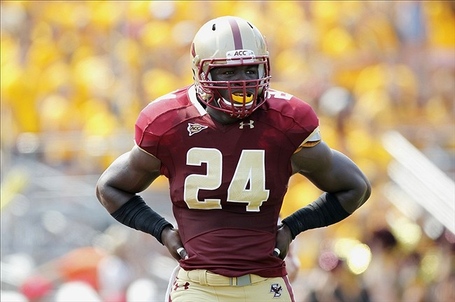 MK: You guys all seem like smart players, who are students of the game. Can you talk about your love for the game and how you got into football?

KPL: "I have always been a competitive person. My father always kept me active and kept me from wasting time, running around in the street. Whatever sport was in season, I was playing that sport. That helped me build my competitiveness and that carried me honestly up until this point now. When I step on the field, I like to compete and if there is someone I can compete with, best believe I am going to compete with that person. From there it's helped me grow a love for the game because, in my opinion, there isn't a sport like this where you can compete. There so many different variables and you're going to face adversity on the field, because it's not just you. You have 10 other guys on the field and another 40 guys off the field. A lot of people are counting on you and it is really a challenge to play this sport."

MK: You have somewhat been given a reputation as a "tweener" among the online draft community, I don't see that on tape, but can you talk about your size? Being 6-foot-1 and 232 pounds isn't really small but does size really matter to you?

KPL: "No, size doesn't matter for me. I have still been able to become a playmaker. I attribute that to the effort I show out there. I believe the people that call me a 'tweener' aren't people that watch a lot of film. I am a guy that's hard to miss on film. I may be small in comparison to a typical linebacker but I don't believe I am a 'typical' linebacker. I give teams a lot of range when they put me in a scheme. I can cover, I can play in the box, I can blitz off the edge standing up and I do a lot of things that I've learned through coaching throughout my career. That can help a lot of teams in a lot of ways.

Quarterbacks are getting smarter now and faster. It's players like myself that can help defenses hold as there are different threats out there."

MK: What scheme do you think you're best suited for?

KPL: "I feel as though I am best suited for a scheme that is fast, allows players to make plays and move. A scheme that's the aggressor. I feel comfortable in most schemes and I don't like to call myself a 'scheme type of player,' because I feel I can do so much. A coach puts me somewhere, I can do that or moves positions if need be."

MK: The draft community has become enamored with spider graphs and your graph is ridiculous. Can you talk about your training for the Combine and what went into that performance?

"I definitely don't have a preference, but coming from the Northeast, I am glad I grew up playing football here because I believe that it's tough to learn how to love the cold." -Pierre-Louis on where he wants to play

KPL: I trained at XPE Sports in Boca Raton, Florida with Tony Villani. He was a great trainer and he invested in us as players and individuals, so there was constant repetition and running. I was actually worried about my [forty-yard dash] because I had never run track before. The only thing I have done in a sprint is play baseball and then I ended up playing lacrosse, so I was worried about that not translating to the speed that I show on film and that I play with.

After listening to Tony, he showed me a lot of mechanics. He and his staff just helped me become a more fluid runner and teach me techniques and I was able to take those coaching points and be able to reduce my forty. I made sure to stick to his program and just keep working from there.

MK: Is there a certain climate you want to play in? I know you've played your entire career in the Northeast, do you have a preference?

KLP: I definitely don't have a preference, but coming from the Northeast, I am glad I grew up playing football here because I believe that it's tough to learn how to love the cold. It's good that I am use to it. I actually have animals, so being a in a warmer climate would help with that. They'll be okay [in warmer weather].

MK: What type of animals are we talking about here?

KLP: I am a reptile guy, so I have a Colombian red-tail boa [snake], a bearded dragon and a sulcata tortoise. Those animals need to have proper heat. I have all my heat lamps up here in the Northeast. Being in warmer weather would help out so they could get more natural sunlight.

MK: Have you planned on what you are going to do for the draft?

KPL: I am a low-key guy, so I am just going to be home watching TV. I may not even watch the draft. I will just make sure my phone is next to me. I will probably do something non-football related because once I receive that phone call, everything I put my effort into will be for football. So for one small moment I'll take that time to sit back.

MK: You got to play a bit with Eagles wide receiver Ifeanyi Momah at Boston College. Can you give us a little bit of insight on him?

KPL: I believe he's a steal. He was a senior when I was a freshman. He has a lot of intangibles. He's big, he's fast and he's physical. Once he learns an offense, he going to work his way to being a threat for the Eagles. That's my honest opinion.