Skip to main content
Breaking News The Eagles are 10-1!

Chip Kelly was all boring and politically correct explaining his decision to cut DeSean. It was a football decision, blah blah blah. Luckily, Twitter wits (twits?) read between the lines and heard what Chip was REALLY thinking.

"I asked him 'have you ever seen The Wire?' he said no. Then I told him were we releasing him and it was best for both of us." 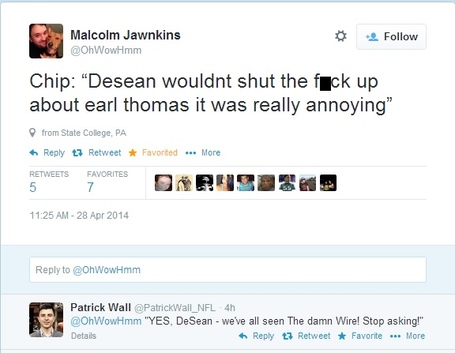 Chip: We made the decision shortly after DeSean declared his preference for Perfect Dark over Goldeneye. I just can't see past that.

@JohnBarchard "Desean kept grabbing all the rocket launchers in Halo and that's just a dick move tbqh, so I cut him"

"He said Pats steaks made the best cheesesteak in Philly." - Chip Kelly

Chip on Desean's release: "He and I disagreed on some things, most notably he said Nas' Illmatic was 'overrated'. Could not move past that."

Joe was close, but I think the answer is even simpler: "Diamonds on My Neck." Chip wants to build a program of excellence, and crappy rapping simply won't be tolerated.