What To Expect From Eagles Draft Day Trades

The Eagles will likely make a trade or two in the draft. What will they get?

Share All sharing options for: What To Expect From Eagles Draft Day Trades

The 2014 NFL Draft is considered to be the deepest in a long time. With only six picks this year, it makes a lot of sense for the Eagles to add an extra pick. They are committed to building the a core through the draft and supplementing it through free agency, adding another pick in the draft gives them another opportunity to strengthen that core. With 25 more underclassmen than last year, there is essentially an extra round’s worth of talent available, and that depth means that the difference between the Eagles selection at 22 and say, 32 is small compared other years. Mock drafts illustrate scenarios where no "must have" player for the Eagles is available at 22, or that a QB falls to 22, if either case becomes reality trading down could be the best option.

Mock Draft: Eagles Trade Down With the Jaguars

Drafting a QB, potential trade partners, and more Mock Draft: Eagles Trade Down With the Jaguars

On the other hand, while it is a deep draft there are still top prospects that may not be on the board when it is the Eagles turn to select. Trading up is a possibility, however unlikely it may be given the Eagles lack of picks. There is also the option of trading a 2015 draft pick. The rule of thumb on these trades is that to acquire a pick in a particular round in the current draft, the team gives up a pick in the previous round in the next year's draft. For example if the Eagles want to add a 2nd round pick this year with a pick from 2015, it will cost them a 1st rounder. A 3rd rounder will cost a 2nd, and so on. With so many underclassmen in this draft weakening the depth and quality of the 2015 draft, that might be an attractive option for the Eagles.

The Eagles have been so active in draft day trades that in 2011 they swapped picks 193 and 194 with New England "just because" they hadn’t made their yearly deal with each other yet (they got this year's out of the way in the Isaac Sopoaga trade). So it is a safe bet that they will be making a move at some point in the draft. Where can they realistically get the most value in a draft trade?

The draft value chart is surprisingly, because the chart is over twenty years old and a lot has changed since then, still relevant. As we can see under the new CBA, under which rookie contracts are fixed, with trades involving picks similar to those the Eagles have this year, most teams still use it as a guideline.

What if the Eagles were to trade up? The Eagles pick at 22, and since 2011, no team drafting in the early 20s has traded up. The closest picks would be two instances where the team drafting 16th moved up:

Trading back from the early 20s has happened each year:

Yes, in consecutive years the team drafting 27th traded up with the team drafting 21st, but gave up different rounds. A clear illustration that the draft chart is very much a guideline and not any kind of gospel. Most likely, the team at 21 in 2011 (Kansas City) had multiple offers and was able to extract good value, and in 2012 and 2013 that was not the case. Even with sporadic results, the team trading back from 21 or 22 has moved down within the 1st round picked up a 3rd round pick. The team trading up has given up a 2nd. What if a QB falls, could the Eagles pick up some extra value? Probably not, the 2011 trade from 16 to 10 was to select a QB (Blaine Gabbert) is, along with the Redskins giving up the farm to select RGIII, the only other instance under the new CBA where a team traded up for a QB in the first round. The value was a little better for the team trading down but nothing extreme. The Eagles might be able to coax an additional late pick out of a team looking to move up and grab a QB, but not much more. As we can see from these deals, they are generally two for one deals, three for one deals involve later, lower individual value picks.

Moving back in the 2nd round produces similar "value" returns that are shaped differently:

The teams trading back from around 54 have traded down within 2nd round and picked up a different round each time. And it demonstrates a flaw in the chart: the value of the picks 61 and 173 is 95.5% of the value of picks 62 and 127. The former deal clearly gets the better pick, 46 selections earlier, but the draft chart says they are really close in value. Trading back in the 3rd round results in a similar outcome:

Again, the results of trading down are closely grouped by draft chart value but are all over the place by round. The 2011 trade received a 6th and the 2012 trade received a 5th that was 27 picks earlier, but according to the draft chart picks 90 and 191 are worth 95.8% of picks 91 and 164. Trading down in the 2nd and in the 3rd both result in the second pick being a 6th rounder, so unless the Eagles want to stockpile late round picks, they should not trade back in the second, the same return will be available in the 3rd round.

With the depth of this draft, might there be added value in trading back on day three?

Not really. Because teams are pretty consistent in what they ask for and agree to when trading up. Well, except for one instance: 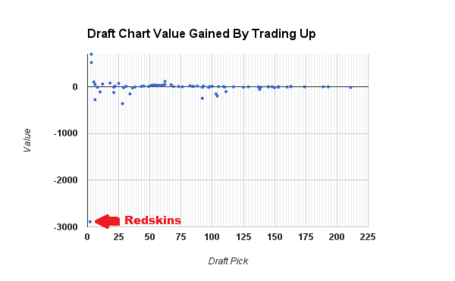 Everyone pretty much plays by the same code rules guidelines when trading picks. That means while there are and will be outliers, teams know going in what it will cost them to move up. And now you do too.