The Eagles must do whatever it takes to keep him on the team. And it has nothing to do with football.

I hate to interrupt all the endless draft predictions and DeSean recriminations filling up the Eagles' internet universe, but this is important.

Evan Mathis is asking for more money, and the team needs to do whatever it takes to keep him on board.

Not because he's good at football -- which I guess he is, if you like blocking (BORING) and all that All-Pro BS -- but because he's consistently the funniest guy on the team.  At least publicly, and what good does it do us if a player is a private, locker room cut-up?  Mathis is actually trending today in Philly.  At least two of his tweet/photo combinations have led to national news stories. And he's one of the best interviews on the team.

I met a stripper named Angle. Her dumbass parents couldn't spell Angel. She was acute one though.

You think that's a little corny? You're just being obtuse.  When was the last time you got 496 retweets?

Then there are provocative political statements, like this classic:  On a similar note, after the death of Fred Phelps -- the man who picketed military funerals to make some obscure anti-gay point -- Mathis tweeted:

Condolences for Fred Phelps' death can be sent from

But politics is a small part.  He has trenchant social commentary, too:

People that capitalize the first letter of every word, or type in all caps, are serial killers and should be avoided at all costs.

And 13 months ago, when this was sorely needed, he Instagramm'ed a screen shot from an online Scrabble-type game reading:  "yolo is not an acceptable word."  Damn right.

There are hilarious commentaries on football and football personalities. His most infamous tweet of all was aimed at Tim Tebow.

Boom.  693 retweets.  Just as funny was his response to a Vine video of Manti T'eo posing awkwardly in a "tough" stance:

That effort was criminally underrated with only 83 retweets.

I can't decide if you're telling us to tolerate your grammar or not. RT @DeionSanders: Please don't tolerate NO ignorance today its EASTER!

I would like to thank the 3 people on my timeline that are not live tweeting the NBA Playoffs.

and one of the most recklessly brave posts I've ever seen a man make:

I'm thinking about making the zit on my wife's forehead pay rent.

This next one was so silly that I couldn't explain it to my teenage daughter, but it cracked me up.  Miley Cyrus of all people was in some kind of mood about something (back story here), and tweeted this:

Im trying 2 tweet about it rather than screaming and waking up the entire hotel! I wanna fXXking screaaam. Im so fXXking angry at the world.

11:41 PM - 4 Apr 2014
(Those XXs are mine, not hers. BGN is a classy joint and we don't tolerate the kind of crudity that young women purvey these days.)
Mathis consoled her:

Stop being sad @MileyCyrus. You're going to crash the stock market.

Perfect -- absurdity, deft critique of both celebrity culture and Wall Street irrationality, short and punchy.  Because there is no justice in the world, 86 people retweeted that -- and more than 12,000 reproduced Myrus' original.

Mathis is a God of Twitter and and Instagram for two reasons.  First, because he's funny, but more importantly, he waits until he has something good to post.  I love Twitter in many ways but way too many people have read some book about brand building that says you need to keep a steady stream of content going to keep people engaged.

NO. Post Less, Post Better. I un-follow lots of good Tweeters because they dump 20 messages a day, some great, many just their opinion on the current issue, which is the same as everyone else's.  Don't tweet something unless no one else can or will tweet it.  I know I need to listen to my own advice better, too.  But Mathis is already there.

There's so much more, I have to let you explore some on your own.  Here are some pointers to:

-- an incisive critique of a standup comedian;

-- funny hate mail he gets;

-- and his original provocation on Twitter, 3 years ago today on another 4/20 Easter. 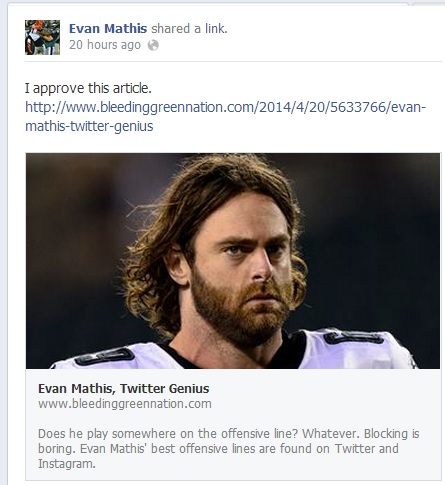