Chip Kelly's latest pro day visit took place at one of the most highly anticipated pro days leading up to the 2014 NFL Draft. Kelly was present at the Texas A&M University pro day to watch a number of talented draft prospects, with the main focus being on quarterback Johnny Manziel and wide receiver Mike Evans. The two make up a highly talented but controversial duo, especially in the case of Manziel.

While the Eagles don't need a quarterback, Manziel has been connected to Chip Kelly a couple times before. Kelly actually recruited Manziel out of high school and was thought to be a perfect fit for his system at Oregon. The team also met with the 21-year old prospect during the 2014 NFL Combine. Grantland's Bill Barnwell proposed the radical and extremely unlikely idea of the Eagles trading Nick Foles in order to get Manziel. While it's unclear if Manziel will be in play for the Eagles, it's no surprise that they want to take a closer look at his talent. Kelly was front and center for Manziel's workout: 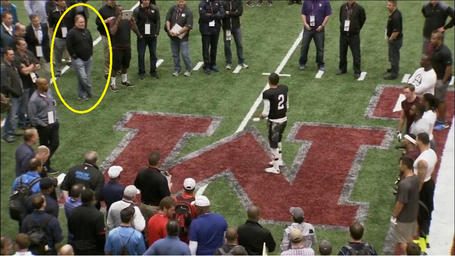 The best thing showcased on the day was Manziel's arm strength and more importantly accuracy on deep passes of 40+ yards. A few of those passes came from rolling out of the pocket as well, something even a lot of NFL starters struggle to do.  The rollout is one of Johnny's unique talents that a future NFL coach can utilize. Let's make this clear — deep ball accuracy separates your average NFL QB from your "elite" one, and it also separates Manziel from the other QBs in this draft class. A major knock on Blake Bortles is his deep ball accuracy, displayed during his Pro Day. Teddy Bridgewater may have the best short and intermediate accuracy of any QB in this draft, but he hasn't displayed the deep accuracy that Manziel showcased today.

And here's Manziel's spider graph from his combine performance:

Regardless of how the DeSean Jackson saga plays out, the Eagles could look to add another wide receiver in the 2014 NFL Draft. The WR class is said to be extremely deep and talented. Evans, 6-5, 231 lbs, is one of the top prospects at the position due to his combination of size and production. He is also one of the players the Eagles will be bringing to their facility for a pre-draft visit. Like Manziel, it might be hard to see Evans being within reach at the Eagles No. 22 pick.