State of the Eagles Roster

Share All sharing options for: State of the Eagles Roster

Last year I provided illustrations, by color, of the Eagles offense and defense, using it to identify weaknesses and strengths.  Today I want to take that to the next level, for two main reasons.  First, PFF is now providing the same visuals.  Maybe they did this before and I didn’t know about it, but in any case, there’s no reason for me to duplicate what they’ve already done.  Here is their projected line-up.  You can see the full write-up here. Brandon wrote his own take on this PFF post last week. 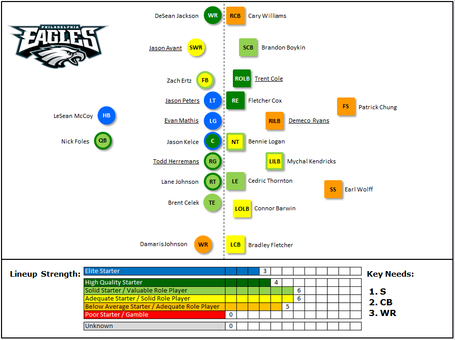 The second, and more important, reason that I want to do things differently is because the above chart misses out on a vital aspect of team construction.

You can’t sustain success if you’re entire focus is the next season.  The team needs to be built so that it can contend OVER TIME.  Given how much luck there is in the game, it makes more sense to contend over a long period of time rather than "go for it" in any one season.  Andy Reid’s Eagles did this perfectly, they just never had things fall the right way.

This is particularly important for the Eagles because of where the team is currently in its team-building process.  I mentioned in my last post that there are still a lot of holes, and some people pushed back.  While there’s plenty of room to disagree over the projected quality of each player, I realized we first have to agree on just what timeframe we’re looking at.

For example, if we are just considering next season, than Jason Peters is far from a "hole".  However, if we’re looking at creating a 3-4 year "window" of contention, then things become a bit more difficult.  Peters is 31 years old.  Do you think he’ll still be an above-average OT in his mid 30s?  It’s possible, but the point is that it’s not enough to just look at this coming season.

The question then becomes:  What’s the best way to alter the graphic above to incorporate longer time-projections?

Today I’ll take a stab at that.  First, though, I want to note that the goal is obviously to build a team that contends for a lot longer than 3-4 years.  However, we have to recognize the limitations, or margin of error, in any attempt to project future performance.  The farther out we go, the less accurate or predictions will be.  Therefore, once we go out to 5+ years, there seems to be very little value in attempting to projecting player performance.  That might not be right, but it’s the constraint I’m operating within for right now.

As you’ll see below, I simply listed every starting player on offense and defense, then assigned them a color based on how I believe they will perform in the relevant year.  For now, we’re going very low-resolution, so I’ve separated players into just 3 groups.  Red is below-average/bad, yellow is average/mediocre, green is above-average/objectively good.  There’s definitely room to refine this (McCoy could be blue, as PFF did above), and I’ll do so after FA and the draft. 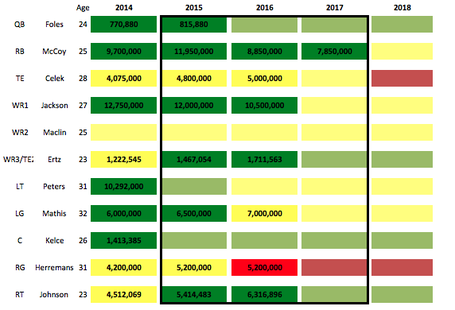 As you can see, I also included the salary cap numbers, mainly to show when players’ contracts were up.  Overall, the offense looks pretty good.  There are just 2 areas that could use some immediate improvement, RG and the TE/WR situation behind D-Jax.  Of course, if Maclin resigns and comes back healthy, he could easy go "green" for the foreseeable future.  That would help a lot.  Still, though, the offense looks like it’s in really good shape.

The concern comes in year 3.  As illustrated, Peters, Mathis, and Herremans are all in their 30′s, and while they can certainly perform at a high level into their mid-30′s, we have to ask ourselves:  what are the chances of that happening?  Moreover, what are the chances that all 3 of them do so?  Slim, at least in my opinion.  That’s why I really wouldn’t be upset to see the team add an OL in the draft (beyond the 7th round OL the team should be drafting every year, but that’s a different issue).

I certainly anticipate Zack Ertz moving into the starting TE role, and being a good player for a long time.  Notice, though, that still leaves a whole in the roster.  Anyway you cut it, the offense has space for another receiving weapon. 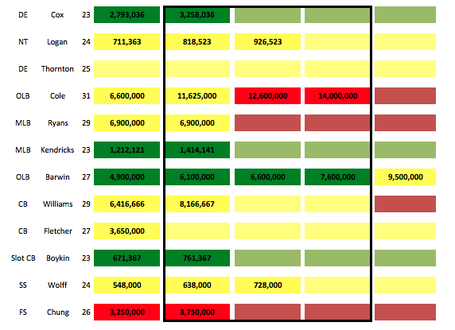 Now we get to the fun part, the defense.  It won’t shock anyone to learn that the defense has a lot more holes than the offense.  There are some tough calls to make here, as far as projections go.  Can Earl Wolff go "green"?  Yes, but I think the odds still favor him being just OK as a starting safety.  Similarly, some people will probably argue that Bennie Logan deserves a better rating.  Again, its possible, but I’m not convinced.  Additionally, it’s very harmful to the construction process if you assume guys will hit their "ceiling".  Many don’t, or rather their ceiling gets adjusted downwards as their career progresses.

Most notable here is the lack of good players in the secondary.  Boykin might be able to slide over to the #1 or #2 CB spot, but that still leaves a hole to fill.  Also, remember not to focus on just the first year.  Look at year 3 above.  Naturally, the team has a few offseason to address the issues, so their not urgent, but it has to be accounted for.  Demeco Ryans isn’t getting any better, and how much longer do you think Trent Cole can play effectively for?

You surely noticed the thick black box in both graphics above.  That’s what I’m looking at as the "strike zone" for this team.  If I’m Howie Roseman, I want to turn as many of those boxes green as I can, even if it’s at the expense of next season.  Also, I want to eliminate every red box.  This is what I mean when I mention accounting for time.  You’re not just trying to build the best team you can.  You’re trying to get a lot of different pieces to fit come together at the right time.  It won’t work if your young players improve to "good" just in time for your veterans to decline.

Again, some more work to be done here, and I’m hoping to do a little research into the general career arcs of different positions (so we know things like what age an OT should be expected to decline).  Keep this in mind though when you hear about potential FAs.  How well to they fill those boxes?

Shameless plug: I'm going to Iraq for Spring Break as part of my pro bono work.  We're doing an online fundraiser to help defray the costs (flights to Iraq are really expensive). Check the project out here and chip in if you can.  Even the smallest contributions are greatly appreciated. Thank you.