On the Mend with Arrelious Benn: Reflecting on the NFL Combine

Just four years ago, Illinois wide receiver Arrelious Benn found himself in Indianapolis, awaiting his turn to show off his skills at the NFL Combine. After four seasons in the league, the current Eagles receiver can reflect on the process that led to him being the 39th overall pick in the 2010 NFL Draft.

Share All sharing options for: On the Mend with Arrelious Benn: Reflecting on the NFL Combine

NFL Combine 2014: Everything You Need to Know

Eagles at the NFL Combine

NFL Combine 2014: Everything You Need to Know Eagles at the NFL Combine

On Sunday, the skill position player prospects for the 2014 NFL Draft will assemble for their portion of this year's Combine. Eagles wide receiver Arrelious Benn was in their shoes just a few years ago and was consider one of the top players at his position. While it has been a while since Benn participated in Indianapolis, he does remember the process he went through in front of his peers, television cameras and loads of NFL coaches and scouts.

Benn ran a 4.59 second forty-yard dash, which proved to be much slower than his Pro Day run of 4.42 seconds. However, he did have 20 reps on the bench press, which was the highest of any at the position during the 2010 Combine. Still, Benn believes he could have produced better numbers but nerves got in the way.

As the new wave of prospects gets ready to hit the turf at Lucas Oil Stadium, BGN spoke with Benn about his experience at the Combine. Benn offered insight on the actual event as well as offered advice for those performing this week in front of hundreds of scouts and coaches.

Mike Kaye: What was your experience like at the Combine? What it a grueling process or was it more routine since you had spent months training for it?

Arrelious Benn: "It was a grueling process. I am not a test guy. I am not a guy to go out and test and do that. I am the type of guy to go out and practice and I am a body memory guy, so the Combine for me was like 'Come on man, let's get it over with.' I had the mindset of getting through it and going home. [However] it was a good experience to push yourself like that. A lot of people can't say that they would to do the Combine the way the NFL does it and it was fun." 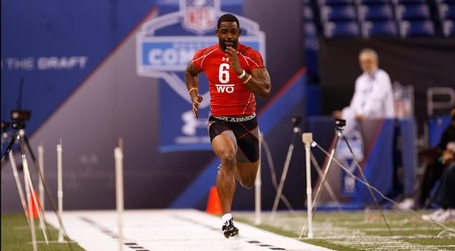 MK: Can you talk about the position grouping and how that works? How did they rally you up for all the drills and quickly coach you up?

Every drill is important and you just want to go out there and do everything. I feel like guys who go to the Combine and say they won't do this and that, feel some way about something that they have. -Arrelious Benn's advice to prospects

AB: "Well, they put you in certain groups and I am sure you can see the guys with the Under Armor tights on with the number, and I don't remember if we did it in alphabetical order or something but they break everybody down . You go there and you run your [forty-yard dash], run your routes and do certain drills and it's all about what the coaches see in a guy. You basically get drafted off your potential and guys basically show what potential that they have there."

MK: What advice would you give a wide receiver prospect heading into the Combine? What is the drill that you think is the most important for your position?

AB: "I think all of them [are important]. I think to this day, when I was at the Combine, that I hyperventilated. I don't think I had as good of a Combine as I should have and I think I was so anxious when I got down to it. You've got to go in with a mindset of 'I have done this before' and don't let the coaches and the media overwhelm you and just out and perform. You've been doing it since you were younger and you have a great opportunity to go out there and do it.

MK: Can you talk about the interview process with teams at the Combine? Did you ever get ask any odd questions? Is the process weird and uncomfortable?

AB: "I guess every organization is different. I had questions about my older brother, who had gotten incarcerated for five years for armed robbery and they asked me about that. Pretty much, that was it. They asked me a few things as far growing up, Illinois, college and [to give them] a background of my football knowledge. If there's something that you did in college and they know about it, they will ask you about it in some sort of way. Not in a disrespectful way, but they are going to ask because they want to know.

They want to know what type of guy you are, because you are going to go to the 'real world' at a professional level where you are not going to be supervised and have a lot of money and time on your hands. They want to know  if you are going to have integrity and going to work. I am sure they run into certain guys and the fanfare doesn't help their on-the-field stuff. They definitely take control and I think they are doing a good job of that."

MK: What is the process following the Combine? What is it like between the Combine and your Pro Day?

If there's something that you did in college and they know about it, they will ask you about it in some sort of way. Not in a disrespectful way, but they are going to ask because they want to know. -Benn on the interview process at the Combine

AB: Everybody is different because of when their Pro Day is but after my Combine I went back out to Los Angeles because that was where I was training at and then I went back to Illinois for my Pro Day. For my Pro Day, I was so relaxed and I felt like I was at home. I blew my Pro Day out but some guys are different and they don't do their Pro Days. If you did everything at the Combine and like what you did and your numbers at the Combine [you can skip it]. It gives a good opportunity to guys that didn't go to the Combine because not everyone gets invited. You try to go out there and get a job and show the scouts what you can do. The Pro Day is essentially as important as the Combine.

On The Mend with Arrelious Benn: The Journey Back to the Field