With the 2014 NFL Draft approaching, a lot of emphasis will be placed on measurables, including height and weight. But to what extent do big guys really beat up little guys?

Every year we take the Super Bowl champion and subject it to an infinite amount of analysis and examination. We put it under a microscope to find out the "how" and the "why", to reverse engineer it, to duplicate it. And every year we are proven wrong, humbled to learn there is no single way to win a Super Bowl. But sometimes it just seems so damn simple. Take Chip Kelly, for example. Bigger people beat up little people, he says. Easy. That’s how Seattle won, right? Their bigger guys beat up everyone else’s big guys. So given enough time, the Eagles just need to stockpile bigger, stronger, better guys and they will be on their way to a Super Bowl and ultimately be the next team we analyze and examine.

But do bigger players really have that "big" of an impact? It’s an interesting question to ask because football players come in all shapes and sizes, and it’s difficult to answer because different positions possess different skillsets and attributes. However, it’s still possible to examine if we focus objectively on a player’s "bigness", a player’s position or position group, and how bigness at various positions impacts individual game outcomes.

For this purpose I’m going to measure bigness using Body Mass Index (BMI), which takes into account a player’s height and weight. Based on BMI, the biggest team in 2013 was the Buffalo Bills with an average BMI of 33.54. To give you an idea of what that value means, players with a BMI of 33.54 can look like Mario Williams (6’6", 290 lbs), Green Bay’s John Kuhn, or Baltimore’s Elvis Dumervil (both 6’1", 255 lbs). The smallest team in the NFL was the Arizona Cardinals with a BMI of 31.23, a value comparable to San Francisco’s Vernon Davis (6’3", 250 lbs). The Super Bowl Champion Seahawks are the 21st biggest team with a BMI of 31.87 and our Eagles are the 8th smallest team with a BMI of 31.75 (the NFL average is 32.13). Given that Buffalo is the biggest team in the NFL and Seattle is the 21st, it seems that simply having a big team (according to average BMI) does not a good team make.

But this validates what we already know: big teams aren’t always good, and being a big player isn’t necessarily ideal at all positions. There is a point after which size compromises quickness and speed, and talent and heart trump height and weight. However, since the game of football is a game of matchups, we can look deeper at how size advantages within matchups and across positions impact which teams win or lose. Using logistic regression, I compared team BMI averages at various position groups to each game outcome in order to see if size afforded any advantage, and how such advantages increased the odds of winning.

First, I compared each team’s offensive and defensive units to their opponent’s, operating under the hypothesis that bigger defenses offer more of an advantage (they do the hitting, right?). Surprisingly, offenses in the NFL are significantly larger than defenses. An average NFL offense has a BMI of 33.07, while defenses have an average BMI of 31.24. Yet despite the average size advantage by offenses, it’s actually the smaller offenses that have the more significant positive impact on game outcomes, and bigger defenses have a significant negative impact. According to logistic regression results, for every one BMI unit an offense is smaller than an opposing defense, a team actually improves its chances of winning by 14.5%. Similarly, for every BMI unit a defense is bigger than an opposing offense, a team decreases its chances of winning by 14.5%. Consider, the two teams which played in the Super Bowl have offenses with BMIs below the NFL average. Put another way (and based on BMI alone), when the Miami Dolphins play the Buffalo Bills, the Dolphins’ offense gives them a 60% chance of winning, while Buffalo’s offense gives them just a 40% chance. 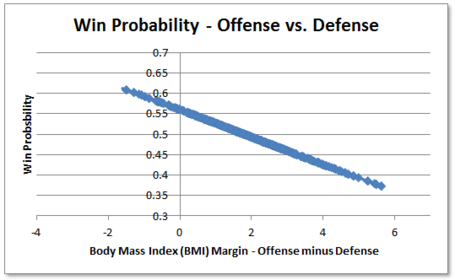 However, these results must be taken with a grain of salt. There are only seven offenses in the NFL that are smaller than the biggest defense, offenses that include Kansas City, Seattle, and Philadelphia. And note from the graph above that offenses still have a slight advantage when they are bigger than defenses by one BMI unit, and reach the point of diminishing returns after two BMI’s. Still, it’s interesting to think that offenses are more effective when slightly smaller. There is plenty of room in the NFL for the DeSean Jackson’s of the world. Speed kills.

The Battle in the Trenches

But this still seems somewhat counter-intuitive, especially given what Chip Kelly said. You would expect the bigger defensive unit to have a greater, positive impact (or the bigger offense would)… Perhaps it does elsewhere. You often hear from NFL coaches and analysts that games are won or lost "in the trenches". It’s hard to argue against. So how much does bigness along the offensive and defensive lines impact game outcomes? Again, not how we think. Offensive lines tend to be a bit larger than defensive lines, on average. The O-line in the NFL has an average BMI of 37.31 while defensive lines average 35.92. In order to better visualize, think Todd Herremans (6’6", 321 lbs) on offense and Fletcher Cox (6’4", 298 lbs) on defense. But just as above, logistic regression results offer a surprise. Relative to individual game outcomes, size along the lines suggests no significant advantage, at all. Any impact the O-line or D-Line bigness may have on whether a team wins or loses is akin to a flip of the coin. But be careful what you read into that. This does not minimize the impact that the battle in the trenches has on a game, rather it illustrates that bigness alone does not impact the outcome.

If not along the O- and D-lines, surely there must be size advantages elsewhere. It turns out, there really isn’t. When comparing secondaries to receivers, running backs and quarterbacks to any position or position group, wide receivers to cornerbacks, linebackers, etc., no position comparison offers any size advantage relative to game outcomes, except for one: linebackers to tight ends. 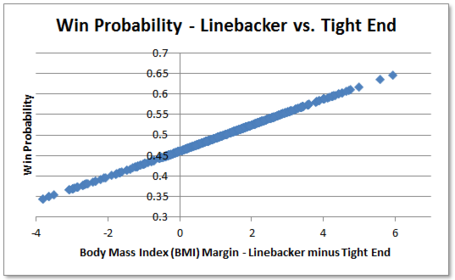 Linebackers have an average BMI of 31.34, 1.3 BMI’s larger than tight ends. When the average linebacker BMI is four to six units greater than the opposing tight ends’, then linebackers give their teams a 60% – 65% chance of winning. In 2013 there were eleven games that fit this condition, all involving Tampa Bay (7) and Chicago (4), teams which possess the smallest tight ends in the league (26.78 and 27.93 average BMIs, respectively). Coincidentally, every time the Buccaneers played a team whose linebacking unit was 4 to 6 BMIs larger than their own tight ends, they lost (by an average score of 27 – 14). The Eagles are in good position in this regard. They have the third biggest group of tight ends in the NFL (BMI = 31.77), and sixth biggest group of linebackers (BMI = 32.36). It would be hard for teams to impress upon them such an advantage.

Since smaller offenses and bigger linebackers have some slight positive impact on the outcomes of individual games, we can use logistic regression results to see just how these two elements of the game interact with each other. The table below shows win probabilities for teams relative to BMI Margin along offense/defense and linebacker/tight end continuums. The majority of games played in the NFL fall within the white box. Everything outside the white box represents outliers. According to the table, teams that have an offense that is one BMI unit less than the opposing defense, and have linebackers that are two BMI units larger than the opposing tight ends, also have a 61.1% chance of winning. 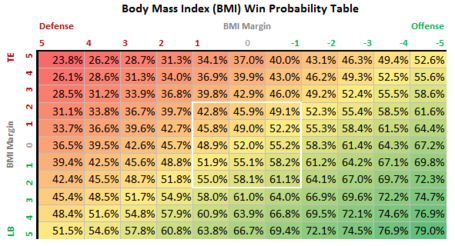 In terms of BMI, bigness does have a relatively small impact on the outcome of most NFL games, just not in ways that we think, and definitely not exclusively. There are so many elements on the football field that limit size advantages or negate its effect completely: speed, quickness, coaching, talent, heart, character, etc. Plus, with BMI values there is an ever-so-subtle interplay between height and weight. Connor Barwin (6’4", 253 lbs) is almost two BMI units smaller than Mychal Kendricks (5’11", 237 lbs). Who would you rather have?

Does this mean Chip Kelly is wrong? Not necessarily. If Seattle’s Super Bowl winning team tells us anything, it’s that we need to qualify Kelly’s statement a bit; his declaration was an over-simplification of the obvious. Instead of "bigger guys beat up little guys," let’s say, "our bigger, better, stronger, faster guys beat up your smaller, lesser, weaker, slower guys. Any day of the freakin’ week." It’s not doctrine, but it’s the mindset of Super Bowl Champions everywhere.