Just a few miles from Arizona State University sits a very popular new restaurant, Salut Kitchen Bar. This past Saturday night, former Eagles wide receiver Hank Baskett was there to promote his local charity endeavors and serve as a "celebrity bartender." However, instead of just serving drinks and the usual bartender shtick, Baskett essentially played the roles of host, entertainer and was a great conversation. He made a lot of patrons' nights, as he wined and dined with locals, who enjoyed the sights and sounds of Salut. Baskett also signed autographs for literally everyone in the restaurant and took pictures.

He walked the room and made sure to pay attention to the Eagles fans in the bar. Baskett reminisced about his playing days, joked around with patrons and talked about his post-retirement work. A good sound bite waiting to happen, Baskett seems happy with what he is currently doing, which involves the Griffin Gives Foundation and working with video game companies like Gaems and Overdog. 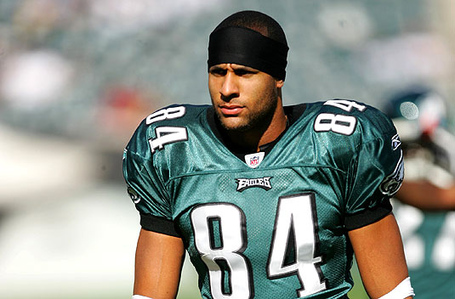 Having been out the NFL since the conclusion of the 2010 season, Baskett still looks like he could play tomorrow. He was in town for his Lung Cancer Walk on Sunday and was recruiting members to join his team to help provide donations for the Bonnie J. Addario Lung Cancer Foundation, a cause that he holds near and dear to his heart. His father recently beat stage four lung cancer with the help of the foundation.

Baskett and I sparked a conversation about his playing days later in the night. As we discussed his work with the Eagles, Colts and Vikings, Baskett poked a little bit of fun at himself, mentioning the muffed onside kick in his lone Super Bowl appearance with Indianapolis. We also went back-and-forth on the subject of his former teammates. The discussion even involved the likes of Nick Cole, Greg Lewis and Todd Pinkston.

After shooting the breeze a bit, Baskett and I sat down for a one-on-one question and answer session. We talked about his career, the current Eagles and what he has been up to over the last few years. Below is the Q&A from Saturday night:

I describe it this way: Philly fans are like a big brother. They beat you down, they talk trash about you, pick on you, call you names but they won't let anyone else do it. -Hank Baskett

Mike Kaye: What would you say to the fans about your career in Philadelphia?

Hank Baskett: "I would just want to say thank you to everybody because when I went back there playing with Minnesota, I was nervous because I know what it's like going back to Philly and just in general, playing against Philly. The fans can get on them but when I went back there and when I went out, the fans treated me like I still played there. A lot of people told me I just earned the respect of the fans by going out there and working hard. It's a blue collar city and they like guys that go out there and work hard. I always tell everybody, I was doing radio last week and I said I always appreciate Philly fans and I am always going to call Philly a second home.

I describe it this way: Philly fans are like a big brother. They beat you down, they talk trash about you, pick on you, call you names but they won't let anyone else do it. So to have someone in your corner all the time, even when things are going bad, they'll still defend you against another team. That's a good feeling."

MK: You've played with some of the greatest quarterbacks of your era with Donovan McNabb, Peyton Manning and Brett Farve....

HB: Yeah, Jeff did something I had never seen anyone do. We were playing the Giants and he got his non-throwing hand stepped on pretty bad. We all looked at it and he was bleeding all over the place. He literally rubbed some dirt on it and said 'Let's go!' and I was like 'Wow!' That was impressive and Jeff came in when he had the opportunity and he made plays. It was an honor to play with the quarterback resume that you said.

From Donovan to Vick to Brett Farve to Peyton Manning to Jeff Garcia, it's a true honor to play with the quarterbacks that I played with and I learned a lot from each one of them. I am very fortunate.

MK: You have obviously had a chance to sit back and watch the current Eagles since you have retired, what do think of Chip Kelly and his offense?

"I am very impressed by it. I think he started off pretty fast last year. It looked like they couldn't be stopped and then they had the bumps in the road and that's what I wanted to see. How would he respond to the Philly media and fans getting on to him when things started going bad? But I would say Chip handled it extremely well and turned it around and bounced back and ended up with a great season. I am excited to see what Philly is going to do next year. They already have one year under their belt in the new offense, so just imagine what it is going to be like in another year in the offense."

MK: We talked a bit earlier (prior to the interview) about your success with backup quarterbacks like Garcia, Kevin Kolb and A.J. Feeley. How do you feel Nick Foles did, coming on as a backup in his second year?

HB: "He came in hungry and that's what any backup in the NFL or any professional sport should be. They should come in hungry because you never know when an injury can happen and that's your chance. Look at DeSean Jackson, he got his big break when Reggie Brown, I believe, hurt his hamstring a few years ago. It's one big break and you always have to be ready. You don't want to waste an opportunity because you don't know when you are going to get it again and that's what Nick Foles did.

My hats off to Vick because I still talk to guys in the locker room and I was told he was just the EXTREME professional, when came to how he handled everything and how he was willing to help Nick. That shows just class there, for all that happened, that takes class. I give Nick props, he came in and he was hungry and he proved it." 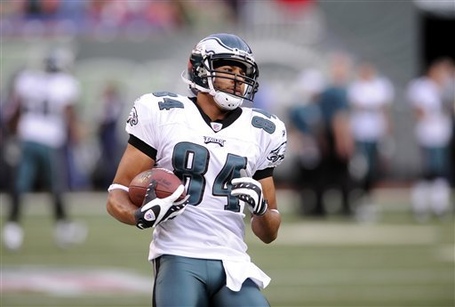 MK: Can you talk about what you are doing post-retirement and how you have been keeping busy? Can fill us in on the great charity you work with?

HB: "Right now, I have co-founded with Tracey Leinen and her husband Jeff Leinen, the Griffin Gives Foundation (located in Kulpsville, PA). Our foundation works with underprivileged kids, the military, veteran affairs and (those who have) debilitating diseases. What we're doing this weekend is having a lung cancer walk in Phoenix and we're donating the proceeds from my team to Bonnie J. Addario Lung Cancer Foundation, who frankly without with, I don't know if my dad, who was diagnosed with stage four lung cancer a few years ago, would be sitting here today.

(Addario Lung Cancer Foundation) has an amazing team of doctors and medical staff and support groups that are willing to help anybody. They wouldn't care if I played in the NFL or was on TV or not. They just want to help and I have seen them help several people, first hand.

I just started a new website, hank-baskett.com and you can follow everything. I do a lot of stuff in the technology and video game industry now. The main focus of what I do now is Gaems, which is the first-ever legit portable gaming environment. You can take you Playstation or XBOX anywhere with you and easily take it on an airplane, take it to a hotel and your kids can play it at home. I play mine, instead of playing games on the TV, I sit there in bed and play next to Kendra (Wilkinson, his wife)so we're in the same room. We can still talk to one another but she can still watch TV and I can play my games.

You can follow Baskett on Twitter at @TheHankBaskett and GAEMS at @GAEMS_PGE. You can also donate to Griffin Gives by clicking here.