Share All sharing options for: Richard Sherman gave his jersey to LeSean McCoy with a message of respect

Richard Sherman is the Seattle Seahawks player that opposing fans love to hate. It's easy to see why. He's one of the best cornerbacks, if not the best, in the game. He makes it hard for the Seahawks to be beat. As if that wasn't frustrating enough, he's not afraid to troll opposing fans, whether that's with on-field demonstrations or post-game comments. The Philadelphia faithful witnessed Sherman's antics first hand during the Eagles' 24-14 home loss to the Seahawks.

Sherman may have (unintentionally) earned some respect back with a post-game gesture he made involving one the Eagles' star players. As seen in a photo taken by Les Bowen, Sherman gave his game jersey to Eagles running back LeSean McCoy. Written on the jersey was a message from Sherman congratulating McCoy on breaking the Eagles' all-time rushing record previously held by Wilbert Montgomery.

The message on the jersey says: "To Shady: Bro, congrats on the record! You have earned everything you have gotten. Have respect for you and your game." 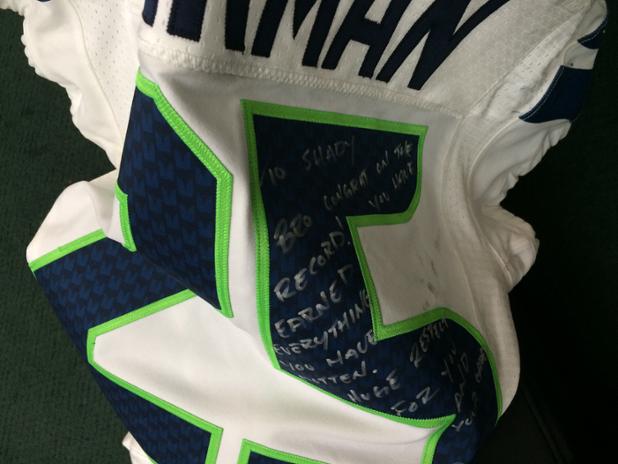 It's a cool gesture by Sherman. McCoy, who recently suffered a loss in his family, had a rough outing against Seattle (50 yards on 17 carries), but the record is still a very special individual accomplishment.