Eagles fans weren't joking around when they chanted "We Want Dallas!" during Philadelphia's blowout win over the Titans on Sunday. A large number of Philly fans greeted the team as they arrived at their hotel in Dallas on Wednesday.

Awesome welcome from #EagleNation down here in Dallas. Gave me chills! #Birdgang

#BirdDay isn't complete without family. And we've got the best family in the world. #FlyEaglesFly pic.twitter.com/kPc5oNyAdZ

Hundreds of @Eagles fans greet players upon arrival at hotel in TX. Players blown away by reception - 2nite on @6abc pic.twitter.com/kYdtGd8czm

Nothing like a warm welcome home! "We want Dallas!!" .. I didn't come just to spectate! #FlyEaglesFly http://t.co/VA4Mz7t166

Landed safely in dallas! Our fans beat us to the hotel and welcomed us the philly way! Our fans are the best in the world

I think I spotted one or two Eagles fans at our Dallas hotel. http://t.co/EbRas1duL0

Eagles fans typically travel well. If this is indication, the Birds should have some quality fan support on Thursday

Not to mention the Cowboys aren't exactly known for having a great home field advantage. Check out this image from Dallas' Week 1 loss to the 49ers. 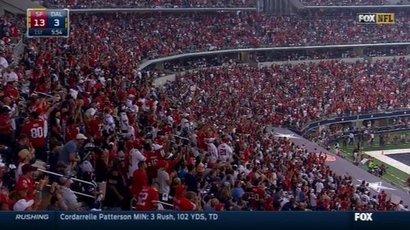