How to win free Eagles free tickets and other prizes

An update on some BGN contests and campaigns.

Share All sharing options for: How to win free Eagles free tickets and other prizes

Bleeding Green Nation is currently hosting a number of different promotions for the great Philadelphia Eagles fan community. Here's a recap of all of them so you don't miss out.

1) Win a pair of Eagles-Titans tickets

Thanks to the good folks over at NRG, you can earn a chance to go to the Eagles-Titans game this Sunday. The Birds are looking to get back on track and extend their regular season home game winning streak to 10 in a row. To enter, you only need to do the following: 1) Follow both @BrandonGowton and @nrgenergy on Twitter and 2) retweet this @BleedingGreen tweet:

Giving away 1 pair of Eagles-Titans tickets! For a chance to win, follow both @BrandonGowton + @nrgenergy AND retweet this. #EaglesNRG

It's that simple. I plan for the will to be announced sometime in the 4:00 PM EST hour on Friday, November 21.

Giving away an autographed Jason Kelce (@Jkelce) jersey - To enter, follow both @BrandonGowton & @nrgenergy AND retweet this. #EaglesNRG

Winner will likely be announced on Saturday, November 22. No specific time yet.

3) Buy an anti-Dallas shirt and raise money for charity

As announced earlier this week, BGN and Philly Phaithful have teamed up for a "Clothe the Fan, Nourish Your Neighbor" campaign designed to raise money for MANNA, a non profit organization that helps feed those battling life-threatening illnesses.

With every purchase of an Anti-Dallas shirt (BUY HERE), we'll donate a portion of the proceeds to Manna as they help feed those with critical illnesses. Good shirts for a good cause.

There are two shirts you can pick from. Or get them both in a combo pack at a discount:

DOWN WITH DALLAS 2-PACK 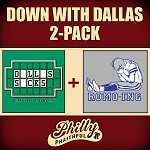 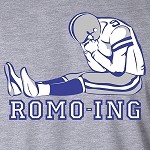 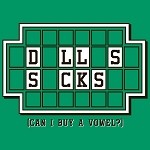 BGN and Philly Phaithful are also teaming up to give away free T-shirts every day until 11/23 so that Eagles fans can have your new anti-Dallas gear shipped to you in time for the big game on Thanksgiving.

2) Tweet at both accounts and tell us why you're thankful for Dallas week. Make sure you use the #ThankfulForDallasWeek hashtag.

First, a pair of Eagles vs. Seahawks tickets! The game takes place in Philadelphia on Sunday, December 7. Here's how to enter:

Who wants to see Eagles vs. Seahawks live at the Linc?!!! All you have to do: 1) RT This 2) Follow Us And we will pick a winner!

And it doesn't stop there. Here's another pair of tickets for the Eagles vs. Cowboys game in Philadelphia one week later on Sunday, December 14.

In review, that's five different promotions we currently have going on. Enjoy!