Eagles on the Road: Fan Experience at Levi's Stadium

BGN's Mike Kaye took the trip to Santa Clara, California for the Eagles-49ers game in Week 4 and came away with some tidbits.

Share All sharing options for: Eagles on the Road: Fan Experience at Levi's Stadium

While it's fun to cover your favorite team for a great website, it's also nice to sometimes enjoy the "fan experience" side of games. This past week, I got the opportunity to sit among the fans at Levi's Stadium during the venue's second regular season game. The Eagles, as you know, lost the contest against the 49ers, but the fan experience was still relatively enjoyable.

Levi's Stadium is massive, yet subtle. It features three NRG bridges (which essentially hang over a moat that is lacking water) that lead to the stadium from the parking lot. The set up is impressive, but not overbearing, which makes it very fan-friendly. In front of the bridges, which feature solar panels that essentially help power the stadium, are several vendor booths that offer beer, giveaways and merchandise. 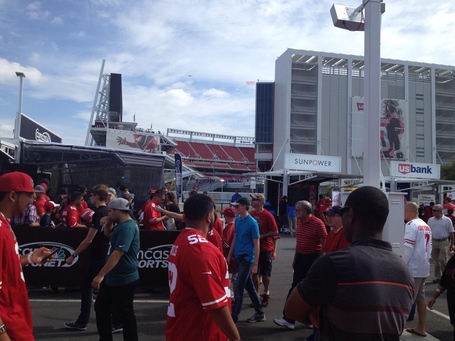 The stadium also features a 49ers museum, which is placed outside of the seating area. It's literally on its own, yet it's still connected to the huge venue. If that wasn't enough to get fans interested in a visit, the venue is also located right next door to "California's Great America," which is a pretty cool theme park that features roller coasters and the like. There is also a golf course down the street and two large hotels flanking the stadium's parking lot.

I discussed the new stadium with plenty of Eagles and 49ers fans and there were very few complaints. It's a very modern stadium with all the bells and whistles, and 49ers fans seem to really appreciate the changes from the legendary Candlestick Park. However, most said that they couldn't compare the two venues. Eagles fans remarked that the stadium was "beautiful" several times (it was essentially the one-word answer from pretty much all of the out-of-towners) and I can't say I disagree.

There were hundreds (if not thousands) of Eagles fans in the stadium. The environment on the road was assisted by The Green Legion, which had a plethora of visitors fly in from all over the country. I joined their tailgate prior to the game and chatted with several Eagles fans that picked this trip because of the new stadium. The hotel that hosted the tailgate offered a free party in the parking lot and filled it with dozens and dozens of fans.

Prior to the game, I was given a tour of the stadium from an NRG spokesperson, who listed a bunch of interesting factoids about the venue, including the following:

While these notes are extremely impressive, they don't even come close to the "green effort" by the Eagles at Lincoln Financial Field. The Eagles lost to the 49ers on Sunday, but they are totally winning the "energy-saving" race. The Linc has more than 11,000 solar panels and a 14 micro wind turbine. The amount of energy generated by the solar arrays and wind turbines on an annual basis is the equivalent of more than four times the power consumed during regular season game days. That probably doesn't make you feel better about the loss, but I thought that was pretty cool.
Something else that I learned at the game was that 49ers fans aren't all jerks. In fact, most of the fans were extremely cordial and friendly. I sat in a sea of 49ers fans and still didn't have any problems. That's a pretty far cry from the litany of fights that have been reported at recent San Francisco games. Then again, Santa Clara is roughly an hour away from the city. 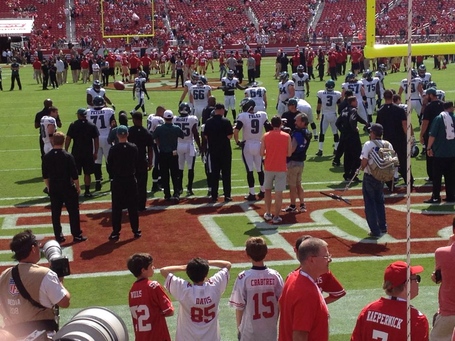 The one main issue I had with the entire experience (other than the loss) was that if you didn't have a parking lot pass, you were essentially in trouble. I didn't have a rental car and needed a cab, but wasn't able to flag one down until after I walked four miles in the hot California sun. They really need to improve that at Levi's Stadium. It should be a massive priority, because Tri-Rail can only take on so many passengers.
All in all, the trip was pretty worthwhile. If you're looking to take an Eagles road trip next year or in general, I definitely would recommend Santa Clara. It's located really close to San Jose, which has a pretty cool downtown area and the stadium is in a very nice and safe environment, which makes it ideal for fans with families.