Can the Eagles be More Opportunistic?

If the Saints game taught us anything, it’s the importance of responding to turnovers.

Share All sharing options for: Can the Eagles be More Opportunistic?

Midway through the first quarter Saturday night, no score, Drew Brees completed a 21 yard pass to his beast of a tight end, Jimmy Graham. The Saints were in Eagles territory and driving. The next play, Brees threw a deep ball along the right sideline for wide receiver Kenny Stills, but it was off target and Bradley Fletcher came up with one of those timely interceptions for which this Eagles’ defense has become known. Needing to capitalize, Nick Foles orchestrated a wonderful drive, moving the Eagles from their own 27 yard line to the New Orleans 15, sprinkling effective LeSean McCoy runs with completions to Riley Cooper, Jason Avant, and Brent Celek. Then, in familiar bend-don’t-break fashion, the Saints defense stiffened. After a Foles’ pass to Celek lost 8 yards and McCoy was tossed for an 11 yard loss, the Eagles found themselves in a 4th and long situation on the 30 yard line. Enter Alex Henery. The feathery-light kicker missed the 48-yarder, a ten minute drive was wasted and a great opportunity squandered. As if to say, "this is how you do it," the Saints subsequent possession resulted in their own three points and first lead of the game.

Kelly and defensive coordinator Billy Davis have installed a new defensive scheme and created a unit that is more opportunistic. How opportunistic? The Eagles’ defensive unit ranked third in takeaways (31) behind Seattle and Kansas City, eighteen more than last year. They were fifth best in turnover margin (+12) and 7th in points off turnovers (95). However, the Eagles were only fourteenth in points per takeaway (3.06), an area Kelly would undoubtedly like to see improved.

But improvement is only necessary if we know it will help. We already know that turnovers are important. You can’t watch a national broadcast without hearing how "just two takeaways will give your team an 80% chance of winning." This isn’t entirely correct (I will explain later), but it does belabor the point: turnovers matter a lot. But what matters more are turnover margin and points-off-turnovers margin (scoring more points off turnovers than your opponent).

But what about at the game level? Do teams really have an 80% chance of winning with two takeaways? Not necessarily. Below is a chart that shows game win probabilities as turnover margin and points-off-turnover margin increase (click on the chart for a bigger version). 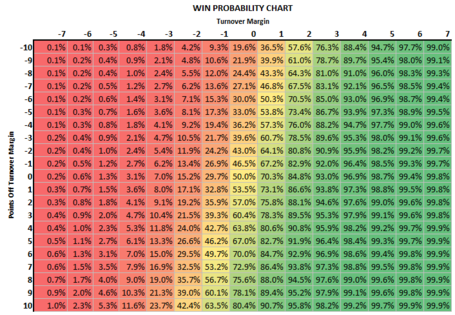 Let’s heartbreakingly apply this to the Eagles game against the Saints. The Eagles owned a turnover margin of +2 and a points-off-turnover margin of +7. This gave them a 93.8% chance of winning the game. Yet, somehow, they lost. If the game were played 100 times, the Eagles would have won 94 of them. While rare, this has actually happened before. During the 2013 season, 67 games were played where the turnover margin was +/- 2. Of those, the team with the +2 margin won 56 games (83.6%). In only three games (4.5%) did the team with a -2 turnover margin win while also allowing seven or more points-off-turnovers than their opponent. And one of those teams just so happened to be the New Orleans Saints (defeating San Francisco 23-20). Go figure.

Heading into his first full offseason as Eagles head coach, Chip Kelly will have much to evaluate. The game against the Saints will be representative of lost opportunities and serve as a reminder to further improve how well the team responds to and capitalizes on turnovers next year. While there are always exceptions and statistical anomalies, in the long haul the strategy should pay dividends.