Eagles vs. Saints Odds: Picking against the Spread

Looking at this week's betting lines.

Share All sharing options for: Eagles vs. Saints Odds: Picking against the Spread

I blew it last week, missing on both the spread and O/U (very rare, at least this season). I blame Patrick Chung...but I did overlook the recency effect of the Bears game. Probably wouldn't have effected the final pick, but may have changed the expected safety margin.

Anyway, that's all in the past. Unfortunately, this week is difficult, for several reasons I'll explain below. I'm assuming everyone has already read a ton of breakdowns, so I'll keep the stat comparisons to a minimum, let's just get the basics out of the way:

Overall, the Saints have been the better team, though the only significant advantage is presented by the weakness of the Eagles defense. However, as everyone's heard by now, the Saints offense has been MUCH better at home than on the road this year. If that's meaningful (and not just a statistical fluke), it could go a long way towards equalizing the only significant difference in these two teams. Also, this is my favorite stat for this week (for Eagles fan's confirmation bias):

In playoff games when the weather was 35 degrees or below, dome teams have won 3 of 25 games. - Chase Stuart

The following numbers show why this game is a terrible one to bet on:

Any guesses as to what those represent? It's something I've talked about relatively recently. Maybe this will make it easier: 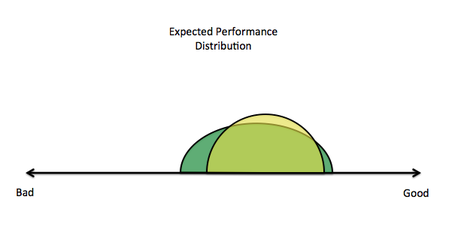 I'm talking about the performance Variance of each team, as measured by Football Outsiders. Put simply, these are two of the least predictable teams in the league. For projection purposes, that's obviously a bad thing (in this case, sometimes you can benefit from high-variance). As you can see in the rough approximation I've drawn above, while the Saints are the slightly better team, there is a LOT of room for overlap here, and the spread is just 2.5 points.

So, I'll make a score projection anyway, but it will warrant less confidence then usual.

Player-wise, Kenny Stills scares me a lot, as the PHI safeties don't have the speed to stay with him. Darren Sproles does as well, because the defense has struggled to cover RBs out of the backfield. Graham will get his, but if the Saints win, it'll be because one of those two guys (if not both) do some serious damage.

Overall, the Saints are averaging 25.9 points per game, but just 17.75 on the road. Note, however, that those road games included contests against Seattle, Carolina, Tampa Bay, the Jets, and the Rams. Those 5 teams are all ranked in the top 12 in defensive DVOA.

As a result, I think we should put more stock into the overall average and the games against the Bears and Patriots. That gives us a projection of 26-27 points.

Meanwhile, the Eagles are averaging 27.6 points per game. As far as key guys, I'm looking to Zach Ertz and Brent Celek. Shady should have a big game, but that's expected. After watching the Cowboys, I'm sure the Saints will look to pressure Foles, which means he'll need outlets. If I'm Kelly, I use the TEs to chip the DEs/LBs, then leak into the middle of the field, 5-10 yards from the line. Foles' height and the shotgun snap should allow him to hit this area despite having defenders in his face, and both Celek and Ertz can be dangerous after the catch (though for different reasons). The normal screen game would make sense, but it'll likely be a focus of the Saints defensive game-plan.

Looking for comparable team match-ups, the week 6 game against Tampa Bay stands out. While it was on the road, it was against the 8th ranked defense (2 spots above NO), and Nick Foles was the starter at that point. In that game, the Eagles scored 31. More recently, the Eagles scored 24 points at home against Arizona, the 2nd ranked defense in the league, and 34 points at home against Detroit, a defense that ranks 4 spots below NO.

That gives us a range of 24-34. Adjusting those boundaries to account for the difference in opposing defense, we get a range of 27-31 points. UPDATE: I neglected the Kenny Vaccaro injury originally. While I won't use it to change my projection, it's worth noting that the actual level of the Saints defense is BELOW what's represented by their ranking, since Vaccaro was playing well and did so until Week 16 when he was injured. That gives me more confidence in the prediction, but isn't enough to warrant a major adjustment.

Taking the midpoints of both projections, we get a combined projection of:

Does that look familiar? (I swear I didn't back into it). While 29 points is a very unlikely football score, remember that we're more concerned with the DIFFERENCE and not the actually values. Here, it's 2.5 points, which is exactly what the spread is.

So, to sum up the spread, we have a projection that lines up EXACTLY with the spread. We also have two very unpredictable teams.

That means, of course, that the smart play is to stay away from the game. Moreover, an Eagles win will be entertaining enough that winning money on top of it won't mean much. Conversely, unless you're a professional (in which case you're likely to be less of a "fan"), there's no way you're betting against your team in a playoff game.

If I HAD to take a side, I'd go with the Eagles, on the off chance that there really is something substantial behind the "Drew Brees in cold weather" story. However, I don't HAVE to do anything, so I'm passing on this one.

If we add up our scoring projections, we get a total points scored range of 53 - 58 points. Depending on your source, you're looking at a line of 53.5 - 54 points. That means the Over looks to be the SLIGHTLY better play here.

Remember the variance. Remember you've got a young QB (Foles) playing in his first playoff game. Remember that game-time temperatures are going to be below 20 degrees. Also note that, at home, the Eagles are just 3-5 against the O/U. On the road, the Saints are 2-6. Combined, that's a record of 5-11.

I don't put much stock in those things to actually shift the projection, but I DO use it to adjust the relative confidence level of the game. So I like the OVER, but it's by a very narrow margin.

I hate the spread (because it looks to be a great one). I like the OVER, but by a very narrow margin. My overall recommendation would be to pass on this game completely. I just don't see much opportunity here, and the game will be entertaining enough with out it. The line hasn't shifted, so we can't take advantage there, and the teams are both very unpredictable.

That's a pretty unsatisfying recommendation, but I just can't see a way around it. Hopefully, the Eagles will win the game and gives us another opportunity next week.