A Statistic for Chip Kelly to Consider

Chip Kelly likes to place an emphasis on responding to turnovers, but has the loss to New Orleans taught us otherwise?

Share All sharing options for: A Statistic for Chip Kelly to Consider

Sometimes, I am a glutton for punishment. Sometimes, my common sense takes a backseat to absent-mindedness. Sometimes, I get in so deep it’s hard for me to discern the woods from the trees. And I have to admit, this is probably one of those times.

I have been stuck on the loss to New Orleans. I can’t move on. I’m fixated, obsessed. It just doesn’t make sense for turnovers to play such an important role in the NFL, for the Eagles to NOT turn over the ball AND intercept Drew Brees twice, and have the Eagles lose (at home no less!). While I accept that anything is possible, the Saints victory was highly improbable. Based on turnovers and points off turnovers alone, the Saints had only a 6% chance of winning… and did. In the last seventeen years, home teams with a +2 turnover margin were 44-1 in the playoffs. Those are really steep odds, so there has to be another explanation.

Last week I wrote about the importance of Chip Kelly’s favorite statistic: points off turnovers. I concluded that points off turnover margin is equally important as turnover margin , that is, how both the offense and defense responds to turnovers has an incredible impact on the outcomes of games. One BGN reader, MikeCampy, argued that there is no reason to believe that scoring after a turnover is no more or less important than scoring after the other team scores, scoring on the first possession of the half, scoring after a punt, etc. And he is right, there is no reason. But, as Brent Cohen can attest, not all points are created equal. So I trekked deeper into the woods.

Thanks to Pro Football Reference’s Drive Finder, I was able to compile a list of drives from the 2013 season that began as a result of both punts (805) and turnovers(364), 1169 drives total. I performed a linear regression to compare turnover point margins and "punt point" margins to the number of season wins and then a logistic regression to compare the turnover point and punt point margins to the 256 regular season game outcomes (wins versus losses). Here’s what I found.

The Eagles’ offense rank fifth in the NFL in scoring on drives that start from a punt. The four teams ahead of them are Denver, New Orleans, Green Bay, and Seattle. The Eagles defense, on the other hand, ranked 25th in points allowed from drives that start from a punt. Compare this to turnover points allowed, where the Eagles rank 6th in the NFL. Clearly this is evidence that the defense took well to Chip Kelly’s want to respond to turnovers. But is one way of scoring points more important than the other? Maybe. According to linear regression, there is actually a considerably stronger relationship between punt point margin and team wins (r-squared = .61) than turnover point margin and team wins (r-squared = .42). I’m hesitant to draw any conclusions from this because there are so many other factors involved (field position, frequency of punt possessions, to name a few), but this result surprised me a lot. Over the course of an entire season, it seems that, on the surface, scoring points from a punt could potentially be more important than capitalizing on turnovers.

But these things are not mutually exclusive. All points scored and points allowed have an impact on the outcomes of games. Based on the results above, here is a chart that shows how punt point and turnover point margins interact to produce win probabilities for individual games (for simplification, I limited the chart to +/- 11 points. (Click on the image to make it bigger): 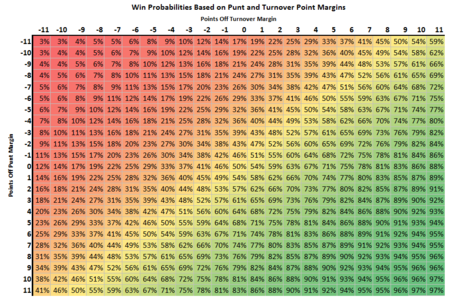 What does this all mean? I think it means I satisfied, for now, my obsession with this game. But broadly speaking, I don’t think I’m ready to proclaim that punt point margins are more important than turnover point margins. After all, points are points. They’re all important and critical. Which is why it may be faulty for Chip Kelly to emphasize more strongly how a team, and in this case the defense in particular, responds to turnovers. While the defense has done a great job of limiting points after the offense turns over the ball, the defense’s "bear down" mentality may not permeate the more common situation: defending the field after the offense punts the ball away. If not more important, that element of the game is at least as important. Adding talent will help, but it couldn’t hurt for Chip to make a primary focal point the prevention of all points… points off punts, turnovers, and otherwise.