Why Time of Possession Doesn't Matter

Chip Kelly has said assertively that time of possession doesn't matter. We should listen to him.

Share All sharing options for: Why Time of Possession Doesn't Matter

Chip Kelly paces from one side of the auditorium to the other. He glances at the team sitting before him then turns to look at the statistics on the big screen behind him. Chip thoughtfully considers the numbers and re-adjusts his visor. The figures are far from impressive. His one-win, two-loss Philadelphia Eagles rank dead last in time of possession. Chip turns to his team and says, "Listen... I figured out what we need to do to win games: we need to win the time of possession battle and keep our defense off the field. It’s that simple.

"Men," he continues, "tomorrow we begin time of possession drills."

Sound silly? It’s supposed to. We already know that Chip Kelly puts less stock in time of possession than a six year-old playing "hot potato". But after the Eagles’ last two losses to the San Diego Chargers and Kansas City Chiefs (ugh), there has been growing sentiment among fans and the media that the primary reason for the team’s struggles is low time of possession. It’s a sentiment that can’t be easily dismissed, since the Eagles’ defensive unit has been on the field twice as long as its offense.

However, it’s a sentiment I don’t quite support.

Time of possession is a funny stat. It seems to tell us a lot about the outcome of a game, and worse, our gut tells us that the longer our team holds on to the ball, the better our chances of winning. In fact, the math supports this. Since 2009, there is a moderate correlation (r-squared = .325, p-value < .001) between time of possession per drive and wins per season. 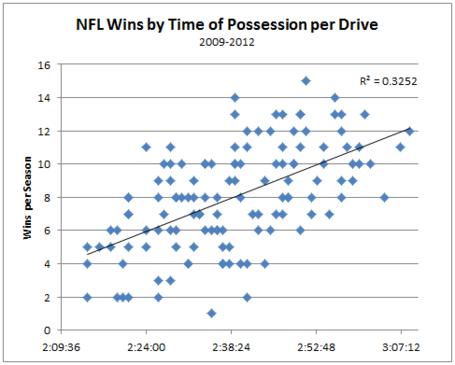 Even at an individual game level, there is a strong relationship. For every additional minute a team possesses the football, they increase their chances of winning by 22%. 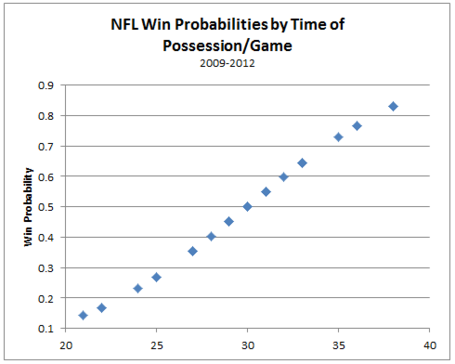 So what’s my beef? For one, the whole correlation versus causation thing. Increasing time of possession does not necessarily result in wins, but rather the score of the game may dictate how a team possesses the football. Secondly, the title "time of possession" infers an offensive statistic. When we see that the Eagles possessed the ball for 20 minutes, we immediately conclude that this is a statistic owned by the offense and is an issue the offense needs to address. This is false. For example, an opponent’s time of possession can just as effectively be "owned" and controlled by the Eagles’ defense, which in turn can impact the amount of time the Eagles’ offense possesses the ball.

Think of offensive and defensive efficiency this way… If both Eagles’ units, offense and defense, were extremely, abnormally efficient, if the Eagles’ offense scored on the first play of each possession and the Eagles’ defense secured a turnover on every single play, then when looking at the boxscore, time of possession and total plays for each team would be equal, yet the score would obviously be lopsided. This is why Chip Kelly dismisses time of possession and does not just preach total plays. He also preaches efficiency, which the media at-large seems to grossly minimize.

Efficiency is the name of the game

Efficiency is the name of the game; yards per attempt, yards per rush, or better yet, points per minute of possession. They tell the story much better than time of possession or total plays. Efficiency stats are elements of the game that are practiced and hopefully perfected; they are the product of execution (be it poor or excellent). Otherwise, when all else fails, when correlations and causations prove too ridiculous, when math is thrown out the window, we can just look at the final score and figure out what happened.